There’s always a special place in my heart for the big ROCK N SHOCK horror convention that takes place each fall in Worcester, Massachusetts. Back in July 2010, when David Albaugh and I created this site, there had never been any plans for us to formally meet (that story covered HERE). ROCK N SHOCK provided the opportunity and venue for this to not only take place but to also solidify our friendship – turning online pals into best friends.  By the time the weekend was over, there was never any question that I would return.

END_OF_DOCUMENT_TOKEN_TO_BE_REPLACED 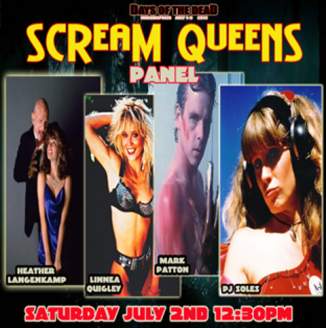 During the first official DAYS OF THE DEAD convention, guests were treated to a panel of “Scream Queens” which included PJ Soles (HALLOWEEN & CARRIE), Linnea Quigley (RETURN OF THE LIVING DEAD, HOLLYWOOD CHAINSAW HOOKERS, & NIGHT OF THE DEMONS), Mark Patton (NIGHTMARE ON ELM STREET 2: FREDDY’S REVENGE), and Heather Langenkamp (NIGHTMARE ON ELM STREET parts 1, 3, and 7). The event was hosted by Nasty Neal from WITHOUT YOUR HEAD who encouraged guests to walk up to the stage and ask questions of this unique gathering of screamers. For those unable to attend, below is an overview….

END_OF_DOCUMENT_TOKEN_TO_BE_REPLACED

It was a ride for dear life as we headed down to Indianapolis for the first annual DAYS OF THE DEAD horror convention! One could not ignore the FINAL DESTINATION like signs as we made our way through a torrential Midwest thunderstorm, a near collision with a semi truck sporting a decal reading “Drive Safely: Heaven can Wait,” and a large, ominous wooden sign with the words HELL IS REAL  glaring at us. The irony of these sights while traveling to an event named DAYS OF THE DEAD was not lost upon us.

Despite these “omens,” we did arrive safely and the only collision I encountered was bumping shoulders with actor, Tom Sizemore, in the hotel lobby. Indeed, celebrities were in no short supply at this convention and were located throughout the three main convention halls.  The event was run by a young man named Adolfo Dorta who admitted that this was not only the first DAYS OF THE DEAD convention but his first venture in running one. Judging by the positive reactions from both the celebrities and fans I heard throughout the weekend, it is certain not to be his last.

END_OF_DOCUMENT_TOKEN_TO_BE_REPLACED 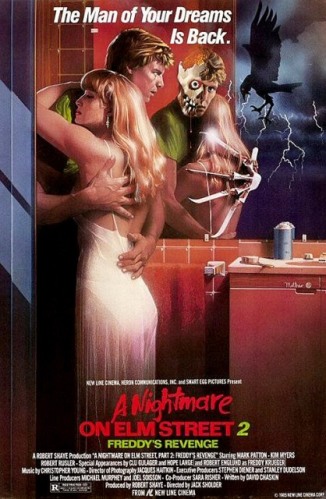 Horror fans have mixed emotions regarding the first sequel to the original NIGHTMARE ON ELM STREET. While the film would see the return of the ever popular Freddy Krueger – one of top three names in the slasher franchise, the film’s lead character would prove controversial. Mark Patton had unsuccessfully tried out for the role of “Glen” (given to Johnny Depp) in the original NIGHTMARE ON ELM STREET but was hand picked to play the role of “Jessie” in FREDDY’S REVENGE.”I was thrilled to be chosen to Star in NOES2,” said Patton. “Lately it has come to light that I was cast over Brad Pitt and Matt Damon. Times change, I guess they are OK.”