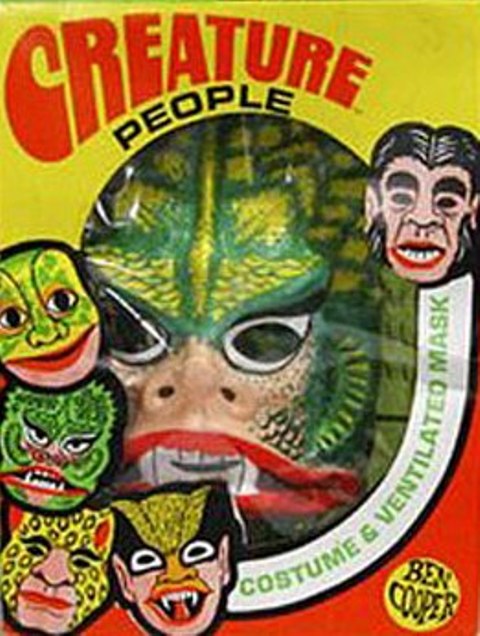 Halloween masks. Some people hate them, some people love them and others just don’t understand the attraction. Growing up I always had to have some kind of Halloween mask with my costume. When I was young I started with those Ben Cooper costumes with the vinyl body suit and plastic mask with the rubber band that held it to your face. As I got older I graduated to rubber monster masks, most of which had little to no resemblance to what they were supposed to be. Times certainly have changed!

Back then in Rhode Island, the mom and pops stores were few and far between so I turned to mail order. There was nothing better than receiving a new mask in the mail, opening the box, and smelling the fresh latex. As Halloween grew in popularity, so did the availability of Halloween-themed stores. Places like Spencer’s Gifts were always a great place to visit around Halloween and soon stores like Spirit and Halloween Town were opening up every September. 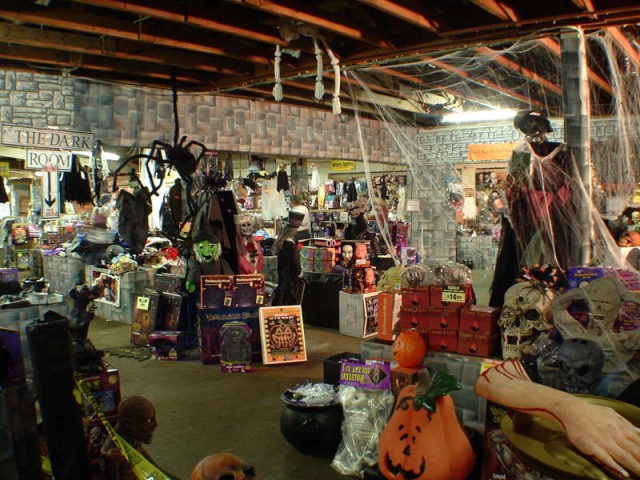 As great as visiting these stores each year is, nothing compares to what I experienced in March of 2011…MASK-FEST! That awesome smell of opening a box with a new acquisition was magnified a thousand times when you entered the Mask Fest room at HorrorHound Weekend in Indianapolis. This was my first MASK-FEST and it did not disappoint.

For those of you that don’t know, MASK-FEST is an annual event that appears during the Indianapolis HorrorHound Weekend. For more information on this great event you can see my pre-event post HERE. For me, I was looking forward to MASK-FEST for two reasons. The first was because I had never experienced anything like it before. The second was because I was finally going to be able to see David Lady again, after 20 years. David Lady is a mask maker, collector, mayor and has his own cable access horror host show called THE LATE DR. LADY SHOW. Then, every October he turns his home into HORROR HOTEL, a walk-thru haunted house. A man after my own heart. You can read more about David HERE.

Upon entering the hall, you are overwhelmed by not only the smell of latex,  but also the sheer size of the room and amount of amazing works of art to be seen! You literally do not know where to start! What made most sense to me was to start at one end and just go up and down every aisle but there was one thing I needed to do first…find David Lady. Thankfully they had him set up at the front of the room in the center. It was a long time coming but I was finally able to see my old friend again…and some new ones. It was great seeing David and the gang throughout the weekend and it certainly is incentive to me to go to future MASK-FESTS! 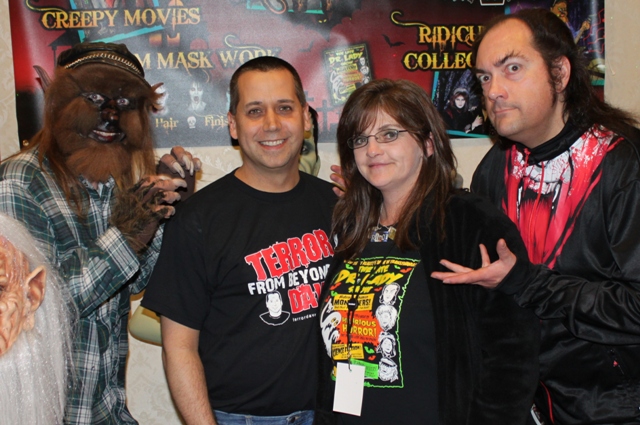 Wolfie, me, Kellie and David Lady.

One of the highlights for me with MASK-FEST was definitely not only seeing David and his wife Laura again, but to finally meet Kellie. Kellie plays Ilean, along with Wolfie on The Late Dr. Lady Show. Thanks to Facebook and MySpace I had gotten to know Kellie a bit and to finally meet her live and in person was something I had been looking forward to for quite some time.

Darkside Studios’ booth, in my opinion, was one of the most impressive, not only in quality but price!

Many companies were represented at MASK-FEST, including the two that really started it all…Don Post Studios and Distortions Unlimited. Though Don Post did not have a lot of their masks on display, Don Post Jr. was there with four of their most well-known masks, The Shape, The Witch, The Pumpkin and The Skull. The last three of course were from the movie HALLOWEEN III: SEASON OF THE WHICH. The Don Post display also featured some shipping boxes with the Silver Shamrock logo stuck to their sides. 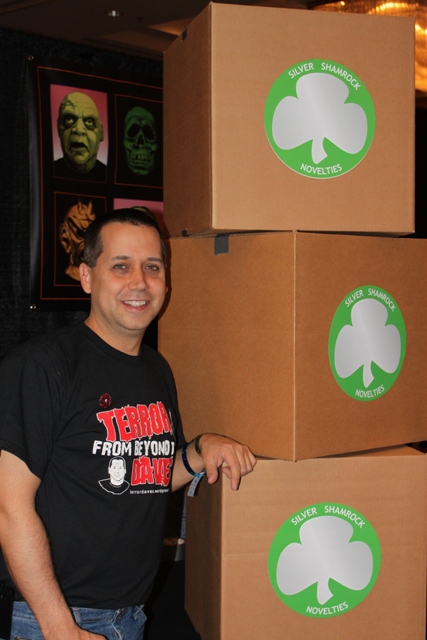 Me with the Silver Shamrock boxes.

Distortions, like Don Post, had a limited set up that featured their Resurrection series of masks. Some were available for sale and they were taking orders for the rest. Seeing the Resurrection pieces in person was a site to behold…these are highly recommended! One of the huge advantages of being at MASK-FEST was definitely seeing the masks in person, knowing exactly what you were buying! 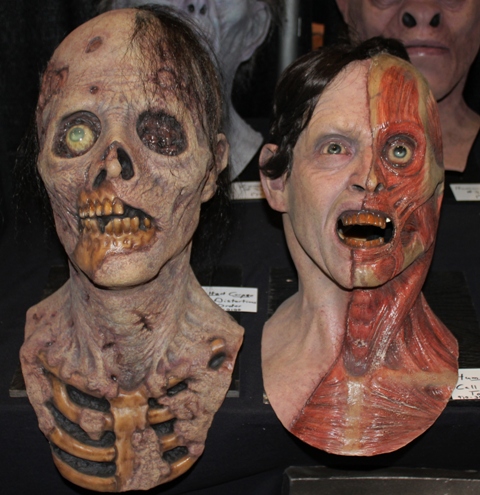 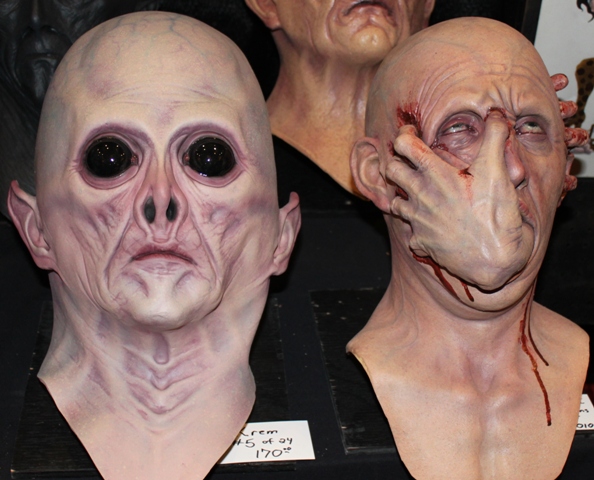 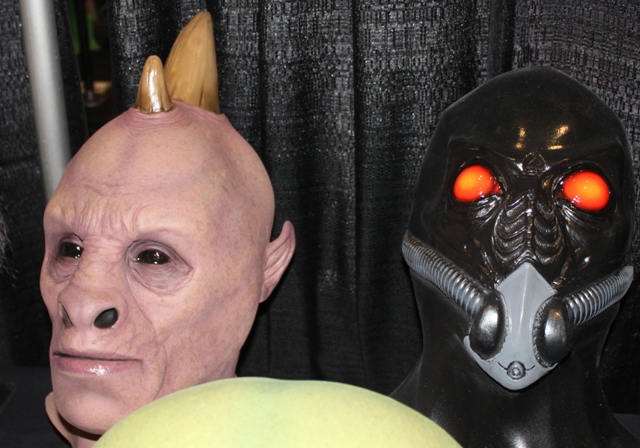 All in all I would have to say that MASK-FEST was an incredible experience. Even if you are not a mask collector, it is difficult not to appreciate the artistry that goes into these pieces, as warped as some of them can be. The room was full of variety too, which mixed things up nicely. Not only were there masks, but you could get books, t-shirts, figures and even preserved insects in display cases! The overall atmosphere of the room was fantastic and you could tell that everyone was having a great time…but then again it could’ve been the latex fumes!

I want to thank Eric Austin and The Halloween Mask Association for putting together such an amazing event!