The next two celebrities I would like to cover are Tim Burton regular Lisa Marie and the one and only Sid Haig. I have always been a fan of both stars, but for different reasons, had never met them. For Lisa Marie she had not been at any previous conventions that I attended. I always found Lisa Marie to be beautiful and found her portrayal of Vampira in the movie ED WOOD to be wonderful. I also enjoyed her alien performance in MARS ATTACKS! and found it to be fun and quirky and I was very much looking forward to meeting her! For Sid Haig, I was actually too nervous to meet him in the past! For some reason, I always associated Sid with his character Captain Spaulding and for some reason, thought he was like that in real life! I know it’s a silly way to think, but I found him genuinely creepy in THE DEVIL’S REJECTS and HOUSE OF 1,000 CORPSES and for the life of me couldn’t believe that he was actually a nice guy! Boy was I in for a surprise with both stars!

Lisa Marie was the first of these two people we visited. Let me start by saying that she is very beautiful in person. I brought with me an 11 x 17 inch ED WOOD poster that I bought off of eBay to be signed and I had my eye on two of her 8 x 10 pics as well. Since we were covering the event, not only for this site but also for Jason Hignite of HorrorHound Magazine, we were filming everything also. As soon as I put the poster down to be signed Lisa immediately asked, “Where did you get that?” At first I thought she was being sociable but then I could see that she was a little put off by me having the poster. Then her handler (or publicist) questioned the poster as well saying that I shouldn’t have that. He then asked us to stop filming (I guess he didn’t want to look like the jerk he was on film).

Now I understand if people are upset with fans bringing bootlegs and such to events to be signed but this poster was sold by a legitimate poster dealer on eBay and should not have been an issue. The fact that such a big deal was made out of it ruined the whole experience of meeting Lisa Marie for me. Both Lisa and the publicist could’ve handled things much better, and been friendlier, especially considering I spent $85 at her table! That’s right, $85! To get the poster and the two 8 x 10’s signed cost $75 and then she charged an additional $10 to get a picture taken with her! I found this insulting to say the very least.

I could perhaps see charging $10 to get a picture taken with her if you did not buy anything at her table but to charge someone when they do spend money is ridiculous (and she was the only one there doing that). That might also explain why there was never a line at her table! It really is too bad that some stars are like this (though I personally believe it had more to do with her publicist than Lisa herself). They have to learn that in today’s economy, money is tight so fans are more selective with who they will actually meet and spend money with. If you charge more than anyone else, and give the fans attitude, then you will be leaving with empty pockets! 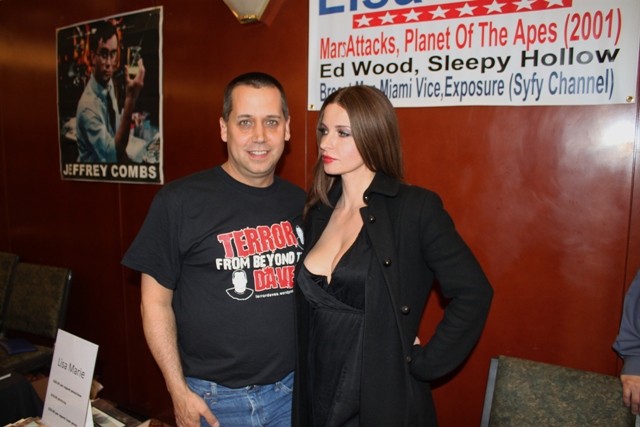 All in all I give the experience of meeting Lisa Marie a huge thumbs down, which is too bad. I am glad that I got the things I did signed and that I also got two pics taken with her (thankfully she didn’t charge me for the second one), including one where she is giving me sexy eyes. Lisa Marie is one star that in the future, I will not be visiting again. I truly hope that this as an isolated incident and that others had a more pleasane experience with Lisa.

Next up was Sid Haig. To be honest I had no idea what to expect from this guy. One of the things I was going to do was get an autograph for my friend James and his monster museum, Count Orlok’s Nightmare Gallery. James had this long message that he wanted Sid to write out, which caused one of the funniest exchanges of the weekend. I ended up typing up the message to be written out and Sid’s reaction was hilarious (and let me say the f-bombs were flying). He started complaining that he would need to put his glasses on to read everything and was questioning why James didn’t make the trip himself to get this done. At least this time the attitude was all in good fun, showing me what a genuinely great guy Sid Haig really is!

One of the things I really liked about Sid is that you can tell he genuinely enjoys meeting his fans, he appreciates them and he loves to bulls**t and tell stories…and he had some great ones! He shared with us complaints of how when the event closed at 9 the hotel restaurant was closed and he couldn’t get anything to eat. He talked about one hotel bar that he went to that didn’t have a mixer to make mixed drinks so he gave them $100 to go out and buy one. He also kidded back and forth quite vocally with co-star Bill Moseley, who was sitting further down the table (keep in mind that every story was loaded with f-bombs and other expletives). 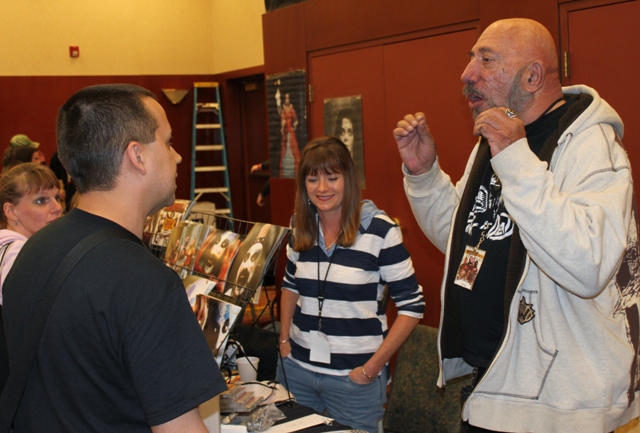 All in all, Sid more than made up for the unpleasant experiences with Lisa Marie. As I was going through the dealer room I found a Living Dead Doll of Sid’s character of Captain Spaulding so I figured I would take advantage of getting a Living Dead Doll that I didn’t already have in my collection that I could get signed by the man himself. It’s nice when you meet a celebrity that so impresses you, that you don’t mind visiting him or her again over the course of the weekend, spending more money. Sid definitely gets two huge thumbs up from this Dave!