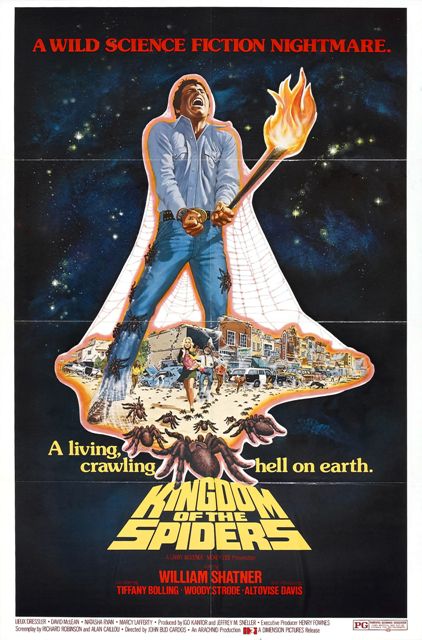 The 70’s were a special time for me. It was a great time to be a kid for so many reasons. I still vividly remember the cool toys like Micronauts and the 8″ Mego super-hero action figures (they are not dolls). Actually, pretty much any toy made by Mego at the time was cool! During this time there was also a constant availability of horror and monster movies to be seen on television.

This was also the time period that began my interest in entomology (the study of insects). Thanks to a Christmas gift of a kit for collecting butterflies and moths, I have had this interest ever since. Instead of actually collecting them now though, I am more into photography and conservation with them.

The 70’s also started my fascination with tarantulas and my parents bought me my first pet tarantula when I was in the 6th grade. She was a Mexican red-knee tarantula (Brachypelma smithi) and I had her for 12 years before she died of old age. She was very sweet, never showing any signs of aggression, and her name was Fang. 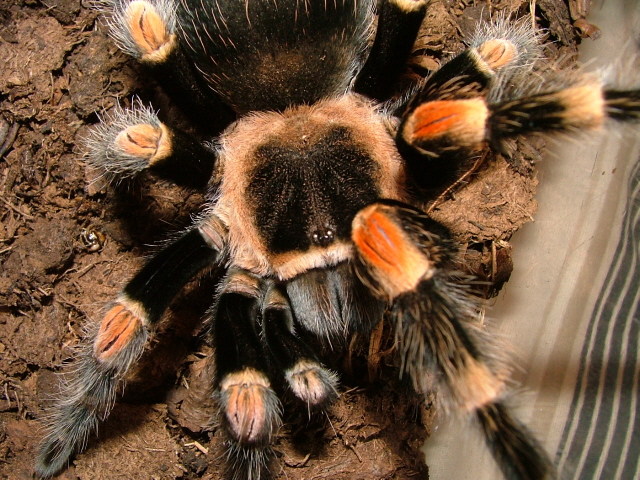 Because of this fascination, and my love of horror movies, it was only natural that I would get excited when I saw the previews for a horror movie featuring tons of tarantulas. This movie, from 1977, was called KINGDOM OF THE SPIDERS and starred Captain Kirk himself, William Shatner. This movie did not rely on cheap models or CGI for their spider effects…they used the real thing!

The ads I saw were for a Friday night television showing (I had no idea that it had actually been in the theater). I could not wait for the school week to be over. Since it was showing on a Friday, I didn’t have to worry about getting up for school the next day. The weeklong buildup, though frustrating at times, was so worth it as I was treated to one of the all time best man vs. nature horror films.

As a kid I was mesmerized by this film! It was just so cool seeing so many real tarantulas in one spot (it is reported the $50,000 of the film’s budget went to pay for the 5,000-10,000 live tarantulas used). The story was great and there were so many genuinely creepy parts. As a 12-year-old I loved this film. Even today, over 30 years later, I believe it still holds up as a classic film. Unfortunately, as KINGDOM OF THE SPIDERS encouraged my appreciation of arachnids, it also caused me to become more aware of the filmakers’ mishandling of the creatures themselves. Looking at the film today, this is something I simply cannot ignore. More on this later…

The plot formula is one that has been used so many times before. An animal, in this case tarantulas, is effected by something that man did to their environment and they strike back. This story takes place in a small town in Arizona called Verde Valley. Thanks to the overuse of pesticides, the tarantulas’ natural foods (insects and small mammals) have been wiped out. So, in order to survive, the tarantulas, who are normally solitary animals, start to hunt and feed in packs, killing prey much bigger than they would normally go after.

The tarantulas kill a cow.

The first animals that are attacked are cattle. When blood samples of the dead animal are sent out, a representative from the Department Of Entomology is sent to Verde Valley to see what is going on. Her name is Diane Ashley and she is played by actress Tiffany Bolling. An interesting sidenote is that Tiffany got the job because she was the only actress who auditioned for the part that was not freaked out by the tarantulas (though in the scene that the picture below is from, her left hand is clearly shaking).

After she reveals to Rack Hansen (played by Shatner) that spider venom was the cause of the death, a spider mound is found on the Colby Ranch where the original cow was killed. The Colby’s dog is also found killed and when Walter Colby (played by Woody Strode) is driving his truck, he too is killed as dozens of tarantulas come out of hiding in the cab of the truck, forcing him to drive off a cliff. 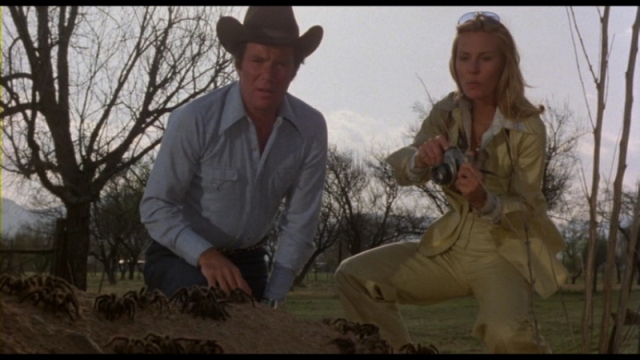 As is typical of movies like this, a festival is coming up and the mayor can’t have all of these tarantulas eating their guests (kind of  like what you heard in both JAWS and PIRANHA). His answer to the problem, which created it in the first place, is to spray more pesticide.  Diane explains to the mayor that it is ignorance like his that caused this problem but of course they spray anyway. The pilot of the plane ends up getting killed when the cockpit ends up being filled with the deadly spiders. In a great shot the plane crashes into a garage and explodes.

The pilot just before he crashes.

The town is then over run with the hungry tarantulas and some of the scenes of people getting attacked are some of the best ever shown. Images of people webbed up and covered with spiders are genuinely creepy and are images that nightmares are made of. Rack and Diane escape and find refuge at the Washburn Inn, run by Emma Washburn (played by Lieux Dressler).

From here they board up all of the windows and hope for the best, but of course the tarantulas get in and wreak havoc. They get in anywhere they can whether it be breaking through windows because of sheer mass, coming down the chimney or in through the air conditioning vents. It is at this section of the movie that William Shatner really shines.

Not only does he have a great scene where he is covered with tarantulas (including one on his face) but you can actually see how conscientious he was to the safety of the spiders! When he is running he is VERY careful not to step on any and even in scenes were he is covered in them, he is very careful not to hurt them. I applaud him for his efforts and wish others had followed his lead.

After surviving the night, Rack removes some of the boards to peek outside and see if the spiders are still there. He doesn’t see any but what he does see is even worse. The ENTIRE town has been webbed up and the end credits roll. Like I said earlier, this is a really fun movie. Yes the basic story has been done countless times before but it is a formula that works. Everyone is great in their parts, providing convincing performances all around. Though no one was ever really in any danger from the tarantulas, it certainly looked like they were and that adds to the overall creepiness of the film.  I highly recommend this movie and with that being said, it is time for me to also complain about it.

Like I mentioned before, my problem lies with the overall treatment of the tarantulas used. This movie was made before the SPCA cracked down on animal use in films. I know a lot of people will have the attitude of “Who cares? They’re just spiders!” but the fact of the matter is they are living creatures that are EXTREMELY beneficial to the environment. They can feel pain and even be killed quite easily if mishandled.

According to the spider handler, Jim Brockett, everyone made every effort possible for the animals’ safety. He goes on to say that anywhere between 5,000 and 10,000 tarantulas were used and they paid $5-10 each to the people who collected them. The main species used was the Mexican  red-knee (Brachypelma smithi) and that with so many tarantulas on hand, there were bound to be casualties. He then mentions that their biggest concern was the tarantulas falling…the reason for this is that there is no protective exoskeleton over their abdomen so if they fall their abdomen will split open like a paper bag full of jelly, killing the animal.

With that being said, there are many instances where little care was taken to assure that they didn’t fall and hurt themselves. There are three immediate examples that come to mind. First are when the spiders are coming through the air conditioning vent. This vent is on the ceiling and they fall into the sink below. That fall is certain death (not to mention boiling water is then poured all over them in the sink). In another scene tarantulas are shown dropping down the chimney. As they scurry away broken legs are clearly seen. Finally, there is also a scene where William Shatner rescues the little girl on the bed that is covered in tarantulas. After she jumps to safety he flips the comforter throwing the tarantulas at the camera. Sure it’s a great image but again, how many spiders were hurt, or worse, when they hit the floor?

This scene of the spiders being thrown from the comforter brings up another issue. Tarantulas have tiny sharp hooks on the tips of their feet, that help them to climb. When they are on a cloth surface, these hooks can get tangled into the fabric very easily. If all of a sudden a tarantula is thrown or brushed off of a cloth surface those hooks can easily rip out of the tips of the feet or in a worst-case scenario, the whole leg will rip off. At least in the case of tarantulas, they will regenerate lost legs the next time they moult.

Two scenes that I found particularly disturbing was the blatant squashing of the live tarantulas. In one scene, as the police cruiser is driving through town, a spider literally pops on-screen as a tire rolls over it. In another scene, at the Washburn Inn, the front door is opened and many tarantulas enter. The next thing you see is everyone stepping on them as they are trying to run away and hide. Disturbing stuff.

The reason Brachypelma smithi were used was because of their gentle nature. It is also this reason, and the fact that females can live to be 30 or more years old, that they were so popular in the pet trade in the 70’s and 80’s. So popular in fact that they were almost collected to extinction, forcing the government to step in and protect them by listing them as a CITES (Convention on International Trade in Endangered Species) animal. This happened in 1985. There is no doubt that over collection for the pet trade was the reason for this but I am also sure that the 5,000 to 10,000 wild caught adults used in this movie didn’t help either. Thankfully it is now illegal to collect these beautiful spiders in the wild. These days any Mexican red-knees that you see in pet stores or offered online are captive bred. 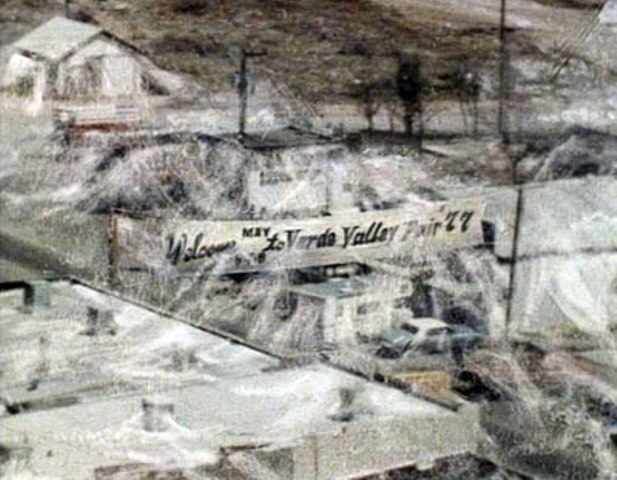 I do still highly recommend this movie to any fan of the genre. It is a fun movie made at a time where certain considerations were not really an issue. There was a rumor many years ago that a possible sequel was in the works, with William Shatner directing, but of course it never materialized. To me a sequel is not necessary. This movie stands on its own merit and because of this will remain a classic for a long time to come. It is rare these days to see a film made that is fun and can stand up so well to repeated viewings. It is also a positive thing that the SPCA more clearly monitors animal use in films and that this species, a valuable resource, is now protected.

8 thoughts on “Kingdom of the Spiders – William Shatner Treks Through Tarantulas!”