It’s hard to imagine what my life would have been like had I not had the honor of growing up with Svengoolie. The “1970’s world” I was raised in was devoid of  VCR/DVD’s and DVR cable. Consequently, watching monster movies at your own convenience was simply not the option that it is today. I suppose this is the “you kids don’t know how good you have it” story that my generation gets to tell in place of “having to walk six miles to school in the freezing cold.” All kidding aside, however, you really did have to be home at the right time to catch a rare showing of what interested you. During this era, many of us “scary movie” kids depended on our local horror hosts to reliably deliver those goods.

I was eight years old when I was first introduced to the “Son of Svengoolie.” Played by Rich Koz, he was actually the second Svengoolie, after the previous Sven (Jerry G. Bishop) moved on to pursue other endeavors. My parents tell me that while my mother was in labor with me, my father sat out in the hospital waiting area watching Jerry G Bishop’s Svengoolie. I suppose it’s a great example of irony that I should grow up to be so enthralled by his protege. To say it was a match made in heaven was definitely an understatement. “Son of Svengoolie” came on every Saturday night here in Chicago via UHF channel 32 (WFLD). Those nights were sacred in my household as I was not only guaranteed to see my favorite genre, but also have it presented with a comedic flair that would influence me well into my adult life.

Like his predecessor, The Son of Svengoolie was chock full of flying rubber chickens (usually directed at our self-deprecating host) along with the occasional poke at the Chicago suburb of Berwyn. Any time that city (or any other for that matter) would be mentioned, you were sure to hear a humorous “Berrrr-wyn” sound off in the background. Aside from airing my favorite movies, the show was also characterized by funny skits and commercial spoofs such as “Dr. Rabbees” – a send up to THE AMERICAN WEREWOLF IN LONDON actor, David Naughton, and his popular “Dr. Pepper” commercials that aired during that time. Often during the next school day, my friends and I would re-enact those commercials, usually taking great liberties with, and arguing over, the “correct” lyrics. To us it was like a live action version of the Topp’s “Wacky Packages” cards many of us avidly collected during that time. These trading cards would mock popular products of the day and were prolific in my third grade world. Needless to say, we couldn’t get enough Son of Svengoolie!

The Son of Svengoolie could also be counted on to deliver a hilarious parody song, often designed to compliment his featured film. I remember during an airing of THE DEADLY MANTIS, he sang “Eating Folks Alive” to Dolly Parton’s “9 to 5” illustrating the giant, voracious insect’s penchant for devouring people. In another show, he sang “Raw Hen” to the “Theme from “Rawhide” while cracking a whip at oncoming rubber chickens.

This part of the Svengoolie legacy I would carry with me for the rest of my life. Later, in my teenage years, my co-worker/friend, Jason, and I would write and perform parodies of KISS songs revolving around a local grocery store we worked at. To this day if I get a jingle stuck in my head I will often create my own lyrics and start singing it as a parody (which my kids have now come to simply accept as one of my many idiosyncrocies). With all due respect to Weird Al Yankovic, it is Svengoolie that us Chicagoans will always regard as the master of novelty songs. In fact, it was the Son of Svengoolie who had first mocked Michael Jackson’s “Beat it,” also using a food theme. Before Weird Al’s “Eat It” brought national laughs, us Chicagoans had already been treated to the Son of Svengoolie’s “Re-Heat it” sung by a Julia Child character amid some very unappealing images of “left-overs.”

One of my favorite memories of Son of Svengoolie was when he presented the classic film, REVENGE OF THE CREATURE, in 3D. I remember my mother coming home from the local Dominick’s Food Store and presenting us all with special 3D glasses designed specifically for the show. That evening, we all camped out in front of the television set wearing our special glasses and gobbling air-popped popcorn. Years later I learned that there had been a lot of controversy concerning the quality of the 3D and some disgruntled viewers. I’m happy that my memories of the event are anything but disappointing. The anticipation and fun we all had far outweighed any negatives. My parents had recently divorced and money was tight. It can be said that the free movie and those cheap glasses made for one very priceless evening.

By the latter half of the 1980’s, many local channels succumbed to the onslaught of corporate television. WFLD was no exception with channel 32 becoming the “new” FOX Network. It wasn’t long after this that many horror host programs, including the Son of Svengoolie, found themselves canceled. Time went on and I reluctantly grew up (well..sort of). Gradually those old memories of Svengoolie would become locked into the back of my psyche. It would not be until my early thirties when these recollections would finally be released.

I’ll never forget that fateful day in 2003 when I was channel surfing and stumbled upon a familiar visage. The face was a bit fuller, and the make-up slightly different, but there was no mistaking that Svengoolie had returned! I was literally knocked back into my chair when I saw, once again, the image of my favorite host gazing back at me.  Much to my chagrin, I learned that Rich Koz had returned to hosting movies back in 1995 on a new local channel known as WCIU (The “U”).  With Jerry G. Bishop’s blessing, Rich Koz dropped the “Son of” moniker and was now simply known as Svengoolie.

His new show still consisted of parody skits and songs, while dodging the customary rubber chickens. The only thing different was my ability to see him clearly, without constant fights with “rabbit ear” antennas. My thrill at rediscovering him was tempered with my wondering how the hell I managed to miss him for seven years(?)! Regardless, Svengoolie was now back in my life and there to stay. Now I would not only have the privilege of watching him again, but also the ability to tape his broadcasts for endless replay. Best still, I could share a bit of my childhood with my own kids.

2003 was also the year that I would have the honor of finally meeting Rich Koz. He was appearing at The Ford City Mall up north and I anxiously made the trip. The event was a promotional gathering for WCIU and I arrived at the perfect time, finding my idol sitting alone at a table. It was a great honor and one that I would repeat many times in the coming years. The quick access I had at the mall was a definite fluke; last fall I waited over two hours to see him at The Party City store in Orland Park. But that  first meeting, we had him to ourselves. I took a picture of my son and daughter with him and was delighted when he showed the photo during one of his mailbag segments, immortalizing the moment even further.

In 2004, my son did as many Chicagoans do during the Halloween season – dressed up as Svengoolie! That November our favorite host made an appearance at a new horror themed store (appropriately located in Berwyn) called “Horrorbles.” As of this date, Horrorbles is also the  “official” supplier of Svengoolie rubber chickens as well as the perfect venue for meeting a horror host.

Prior to this event, I had submitted my son’s Halloween picture to the show. It was a great thrill when he walked into the store, immediately pointed at my son and said, “Your picture is going to be on TV next week!” Although it was hard to tell through the make-up, my son was grinning from ear to ear. We couldn’t wait to tell all our friends and family that Alex would be on the Svengoolie show. Everyone stayed up to watch, including my 80 year old grandmother who almost had a coronary sitting through TALES FROM THE CRYPT: DEMON KNIGHT.

While corporate TV has killed the connection that many hosts used to have with their local communities, it brings me great pride that THIS city, via Svengoolie, has retained theirs. In fact, I would argue that Svengoolie is even MORE connected to his public than past hosts via his daily blogs, interaction with the Svengoolie YAHOO group, monthly newsletters, and numerous public appearances. But the biggest thrill to kids (as well as to a big kid like me) is to get an on-air mention from the man himself. It’s a great feeling sometimes to have that “local” connection to your community – particularly those that still choose to watch their local horror host despite now living in a VCR/DVD and DVR cable world.

I submitted the photo I had taken of my costumed son meeting Svengoolie along with my memories of Svengoolie to “Scary Monsters Magazine.” The “blurb” I contributed at that time was pretty much a “Reader’s Digest” version of this one. Both the piece and the photo saw print in a special tribute issue to Svengoolie. There is no doubt that Svengoolie’s popularity is getting ever stronger. On May 1st, 2010 he scored a ratings bonanza by receiving the highest Chicago Nielson ratings for his HD presentation of THE BIRDS. This is virtually unheard of with local horror hosts and, as my friend Michael Monahan (Doktor Goulfinger) stated in an email to me, “I couldn’t help but be reminded what a big impact Svengoolie continues to have in Chicago. Just amazing. The quality and consistency of the films he’s showing these days is incredible. It’s a real reflection of his status.” 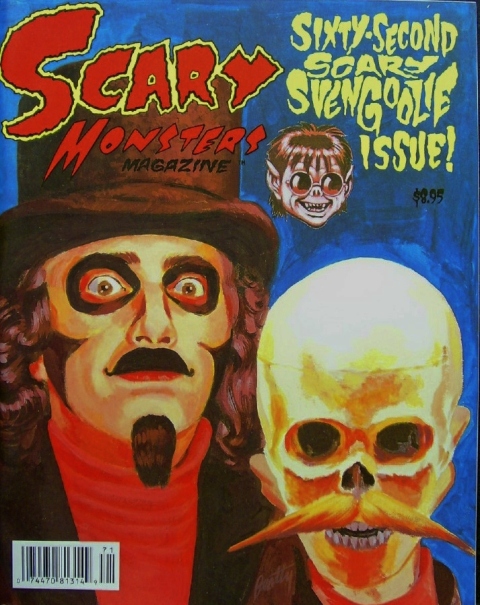 This past year, I have discovered many new hosts from across the country and also had the opportunity to sample their work. They are all quite unique and many of them are absolutely hilarious. I intend to pay tribute to many of  these personalities in future posts. But before I could do that, I knew that I had to start with the man who, in my world, started it all. He not only enhanced mine and my family’s lives, he has made a positive impact on the city itself. He, along with Brookfield Zoo and deep dish pizza, is one of the many reasons to love Chicago!

One thought on “Growing up (and Growing Older) with Rich Koz’s Svengoolie!”