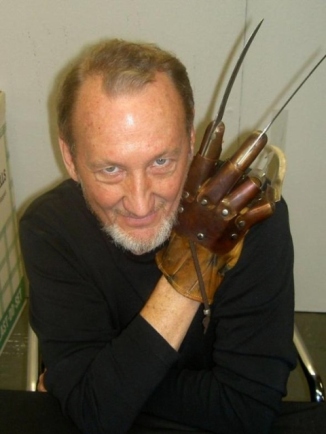 One of the highlights of this year’s ROCK & SHOCK convention in Worcester, MA was meeting and getting to know the artist couple Asia and Anders Eriksen. Asia was covered not too long ago with her amazing creations known as WerePups (you can read all about it HERE). Anders, her husband and an amazing artist in his own right, is the creator of NIGHTMARE GLOVES, the VERY BEST Freddy Krueger gloves available on the market today! Being a collector of masks and props it takes a lot to impress me these days and I will say with all honesty that when it comes to these two, impressive is a perfect adjective! Not only are they amazing artists but they are also very friendly and personable and if you get the opportunity to meet them at a convention, please do not hesitate. You will not be disappointed!

END_OF_DOCUMENT_TOKEN_TO_BE_REPLACED

I first became aware of WerePups over a year ago. After a friend took pics of them at the HORRORFIND convention in Gettysburg, PA, I knew it was something that I wanted to find out more about (plus, of course, I wanted one). Thankfully one of the pics my friend took included the URL for the WerePups website and the rest is history so to speak. Over the past year I came into contact with Asia Eriksen (creator of the WerePups), her husband Anders Eriksen (creator of Nightmare Gloves, the BEST Freddy Krueger gloves available) and of course Eriq Chang, mastermind behind Fable Foundry, who brought everything together.

END_OF_DOCUMENT_TOKEN_TO_BE_REPLACED

I just returned from the FRIGHT NIGHT convention in Kentucky but wanted to wrap up this event before delving into that one.  I attended the VIP party there as well but, it was so horrendous, I couldn’t make a blog out of it if I tried. Let’s just say that the one I describe below was 1,000 times better and showed that sometimes the “new kids on the block” could teach a thing or two to the older ones!

Saturday was a busy day at DAYS OF THE DEAD and, as the doors to the main convention halls closed, I tiredly dragged myself up to my room. I took a shower and, as I was organizing all the materials I’d acquired during the day, was jarred by the ringing of my cell phone. Upon answering, I soon heard the monotone voice of Illinois Public Access host, Count Gregula, asking what I was up to. After revealing that I had no plans for the evening (save zoning out in front of TV) Gregula asked the question that every horror conventioneer longs to hear, “Would you like to attend the VIP party with us?”