I just returned from the FRIGHT NIGHT convention in Kentucky but wanted to wrap up this event before delving into that one.  I attended the VIP party there as well but, it was so horrendous, I couldn’t make a blog out of it if I tried. Let’s just say that the one I describe below was 1,000 times better and showed that sometimes the “new kids on the block” could teach a thing or two to the older ones!

Saturday was a busy day at DAYS OF THE DEAD and, as the doors to the main convention halls closed, I tiredly dragged myself up to my room. I took a shower and, as I was organizing all the materials I’d acquired during the day, was jarred by the ringing of my cell phone. Upon answering, I soon heard the monotone voice of Illinois Public Access host, Count Gregula, asking what I was up to. After revealing that I had no plans for the evening (save zoning out in front of TV) Gregula asked the question that every horror conventioneer longs to hear, “Would you like to attend the VIP party with us?”

For those unfamiliar with fan conventions, many offer an opportunity for fans and celebrities to mingle in a social setting after convention hours. It’s not included with the standard ticket and is usually, on its own,  more expensive than your weekend pass. For this reason, I had never attended one before – wanting as much cash as possible for autographs and vendors. When DAYS OF THE DEAD organizer, Adolfo Dorta, agreed to give me press passes for the event, he made it clear that the VIP party was not included.

Needless to say, the prospect of actually being able to experience a VIP party first hand immediately perked me up. I quickly dressed and zoomed down to the lobby to meet up with the Count & Countess Gregula. The party took place in the hotel lounge and many fans and celebs had already arrived.

As we waited for Adolfo to let us in, a small boy dressed as the iconic slasher, Jason, entertained us by running around and mock “slashing” random people. Everyone commented how cute it was and laughed as the little boy happily “murdered” his sister and various guests (including me at one point). Only at a horror convention could a scene like this draw smiles as opposed to a quick call to DCFS. This soon attracted the attention of the real “Jason” from the 2009 FRIDAY THE 13th remake, Derrick Mears. Mears was about as tall as the child was short and it made an interesting contrast, not to mention a great photo op. 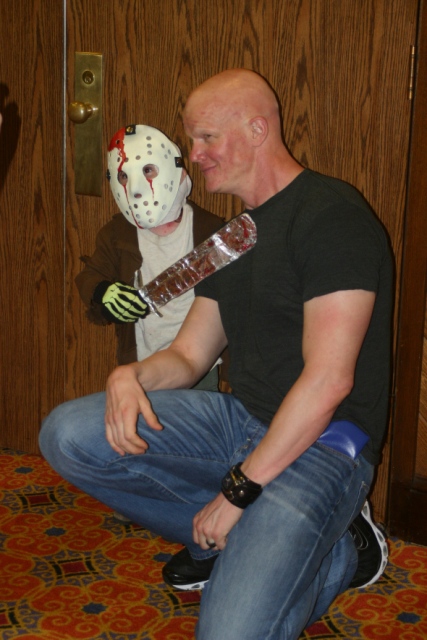 After Adolfo arrived and let us into the lounge we could see it was already a full house. A small buffet table offered a fruit and cheese tray which was soon followed by a crate of White Castle sliders. The Midwestern delicacy (and favored food for late night partiers) was set on the main stage while everyone rushed to it like zombies to a brain. 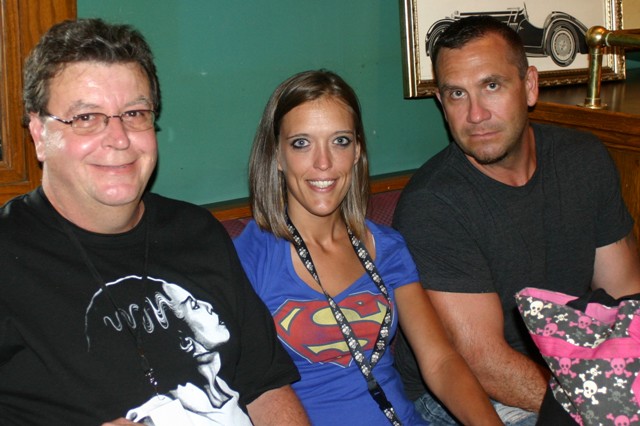 Just as promised, the fans were able to mingle freely with their favorite stars. I noticed James Downing from MONSTERS FROM THE BASEMENT enjoying the company of WALKING DEAD’s Melissa Cowen at a nearby table and waved hello. I’d met Melissa back in October at Rock & Shock covered HERE. Over by the bar, showing off pictures of bikini clad gals on his cell phone to a friend, was Jake Busey. Busey was very friendly and didn’t mind taking a break to pose for a picture. I confessed to him that STARSHIP TROOPERS, with its gratuitous use of nudity and gore, was a guilty pleasure. He gave me warm, “Why, thank you!” while posing for a shot. 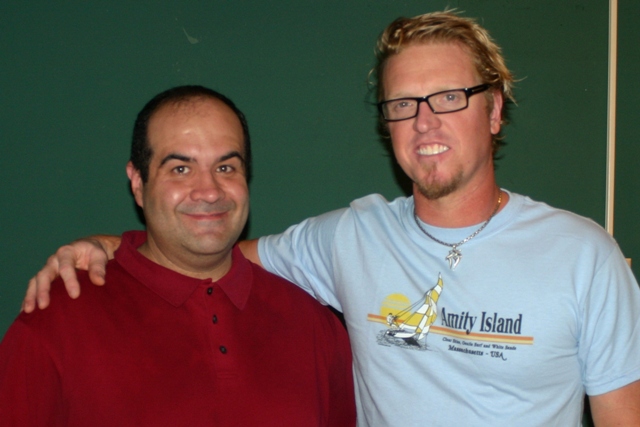 Hanging at the bar with Jake Busey

Another friendly celeb was William Katt. Like Ms Cowan, I had the privilege of also meeting Katt at Rock n Shock in Massachusetts. He was very personable and we talked about my how my younger brother, Keith, was obsessed with Katt’s GREATEST AMERICAN HERO TV show and made frequent trips to the doctor – a result of his many failed attempts at flight. Katt retained his reputation for being personable here as we discussed the fact that, had Mark Hamill turned down the role, he was the next choice in playing Luke Skywalker in STAR WARS 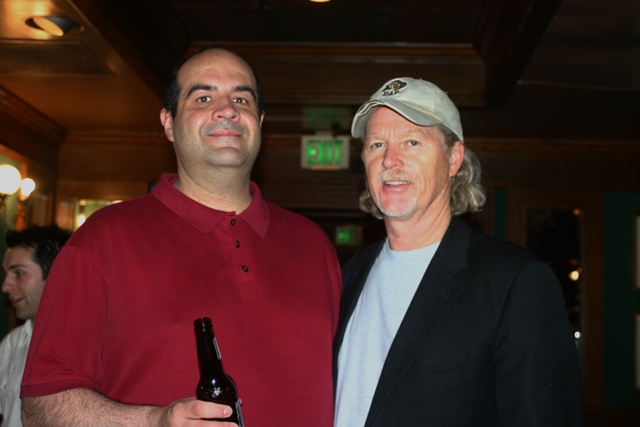 Sharing a beer with William Katt

Other notable celebs who freely mingled with guests was NIGHT OF THE LIVING DEAD alumnus John Russo and Russell Streiner! I met up with Streiner the next day during an interview with Gregula and asked if he’s recite his famous line, “They’re coming to get you Barbara!” He agreed and then pointed to a pile of quarters at his table. Every time a fan asks him to recite the line they are to pay 25 cents – all in could fun. Before leaving, I had no choice but to ante up! 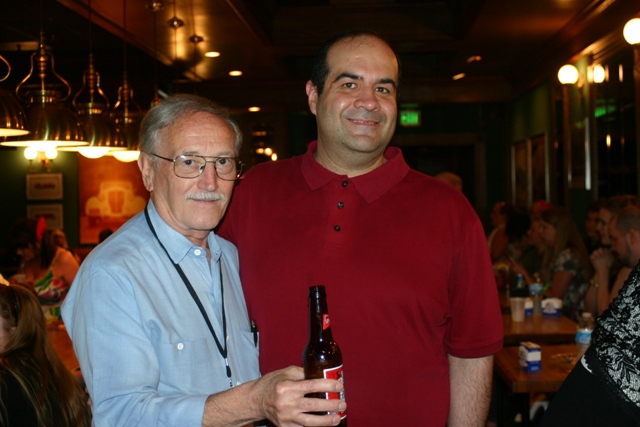 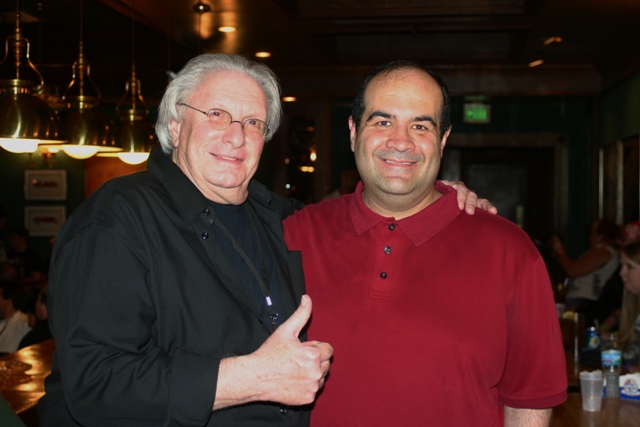 You assume that celebrities are just there because they have to be but I noticed this was not the case. All the celebs I observed were clearing having a lot of fun and dished out many compliments regarding how the event was set up. Everyone I asked – both celebrity and fan stated they would love to attend another convention such as this. 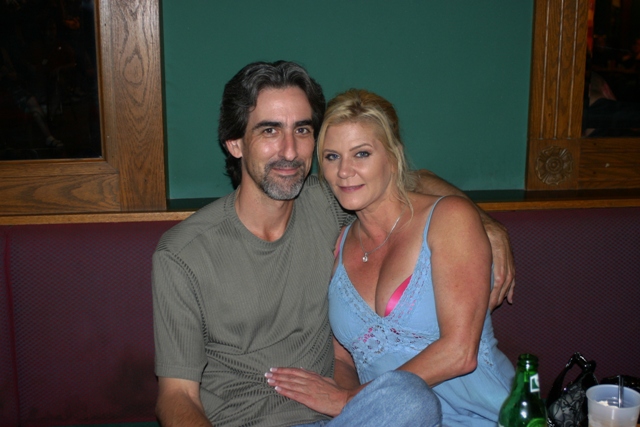 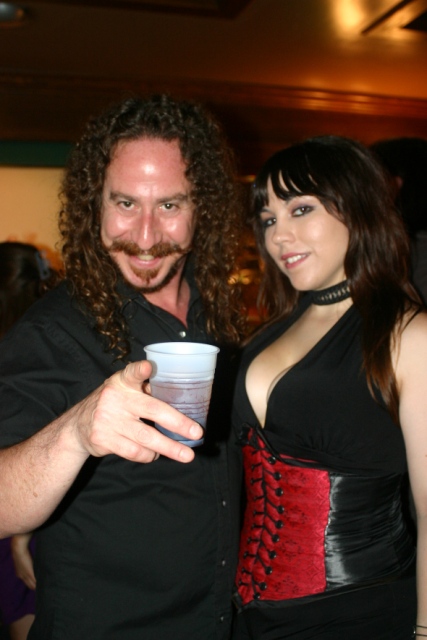 Soon, all attention was back on the main stage as Adolfo took the microphone…

Thanking everyone for making the first official DAYS OF THE DEAD a huge success, Dorta then began giving away some great prizes for those lucky enough to be carrying a winning  raffle ticket. Some of which included some unique gifts from Fable Foundry Creative Studio. We’ll be giving Fable Foundry a much closer look soon. 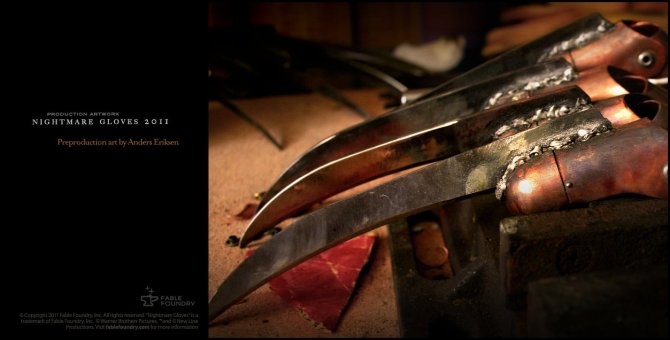 Freddy fans will be VERY interested in the unique, hand-crafted items coming soon from Fable Foundry!

Aside from generously donating items (that many of us would pine away for) as gifts for lucky raffle winners, the company’s founder and Creative Director, Eriq Chang, has a philosophy that we Daves have come to live by. Unable to attend the event itself, he gave Adolfo some positive words to share with guests. We’ll be sharing those when we delve into why this is a company horror fans can be proud to support so stay tuned and keep your eyes on this company!

The happy mood, ever present but enriched by the words of Mr. Chang, reached a fever pitch when Adolfo unveiled two posters which effectively answered the question we all had on our minds; will there be another DAYS OF THE DEAD? The answer was a resounding YES as not one, but TWO more DAYS OF THE DEAD conventions were revealed! 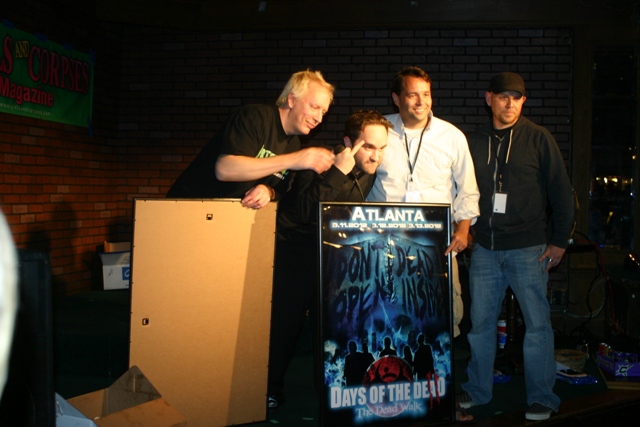 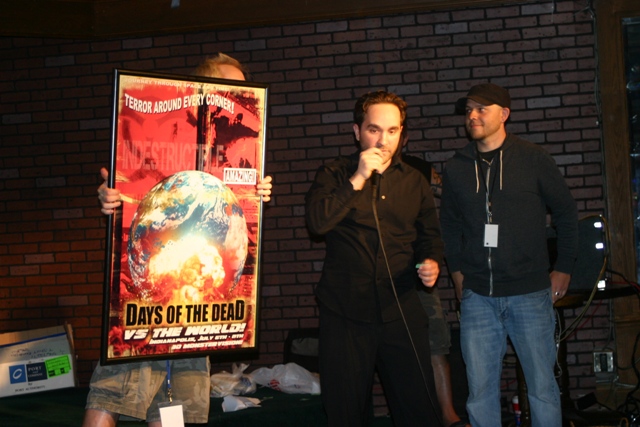 Returning to Indianapolis July 6-8th 2012: DAYS OF THE DEAD III

For horror fans, there are a LOT of events to choose from these days and while many of us base our choices on the celebrities featured let me say that we also would like to be treated like VIP’s. For that experience I urge everyone to consider attending DAYS OF THE DEAD! I’ve done quite a few conventions this year and can safely say that Adolfo and his amazing team will see to it that you receive the best of both worlds!

6 thoughts on “Days of the Dead VIP Party: Where Horror Fans and Celebrities Mingle!”