Would you believe something as simple as a friend’s Christmas list could help sweep away the holiday blues? It did for me, though not in a syrupy Hallmark Channel sort of way, but rather with a nostalgic boost of horror that was like reconnecting with an old pal; one you never should have lost touch with in the first place. It all started a few weeks back while doing some online shopping. I was looking over the other Terror Dave’s Amazon “Wish list” hoping to fill in a few gaps when one of his requests seized my attention. It was a new book (written about older ones) titled “Paperbacks from Hell” and written by Grady Hendrix. The adventure that followed would not only melt this Winter Warlock’s heart but likely impact his coming year as well. Before I explain, I’d like to clarify this is NOT a book review. Don’t get me wrong, it’s a phenomenal book; loaded with enough illustrations to merit your coffee table and absolutely worth buying. However, in keeping with the spirit of season, I’d rather spotlight its Sin-spirational subject matter instead.

Whether onscreen or in written form, I couldn’t get enough horror back in the mid/late ‘80s when I was in high school. This inspired constant trips to the local Homewood Video while frequenting our now extinct Crown Book Store in search of paperbacks. I remember bypassing all the best-selling hardcovers displayed in the center aisle and making a sharp left to the appropriate section marked “Horror.” There, I’d plant myself for the better part of an hour rifling through titles while deciding which ones to take home. Considering the abundant selection, this was no easy feat and often required breaking the universal rule of not judging books by their covers. And talk about eye candy! The art featured on these books were usually gruesome, unintentionally hilarious, and often successful in their goal of inspiring a purchase. 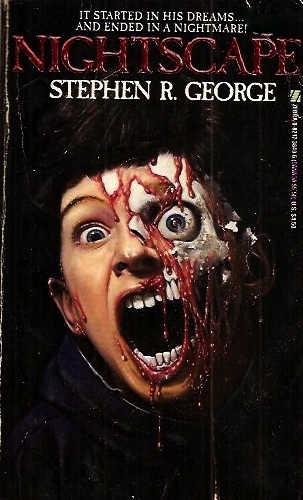 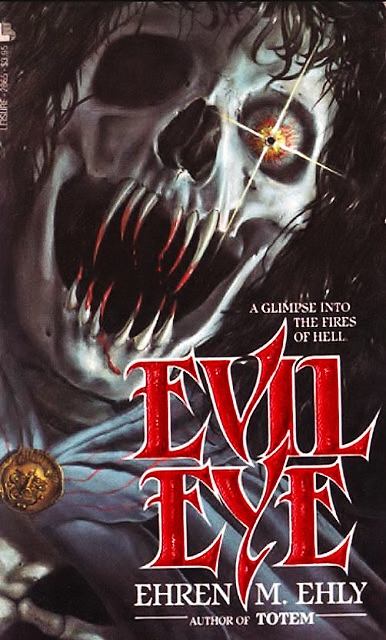 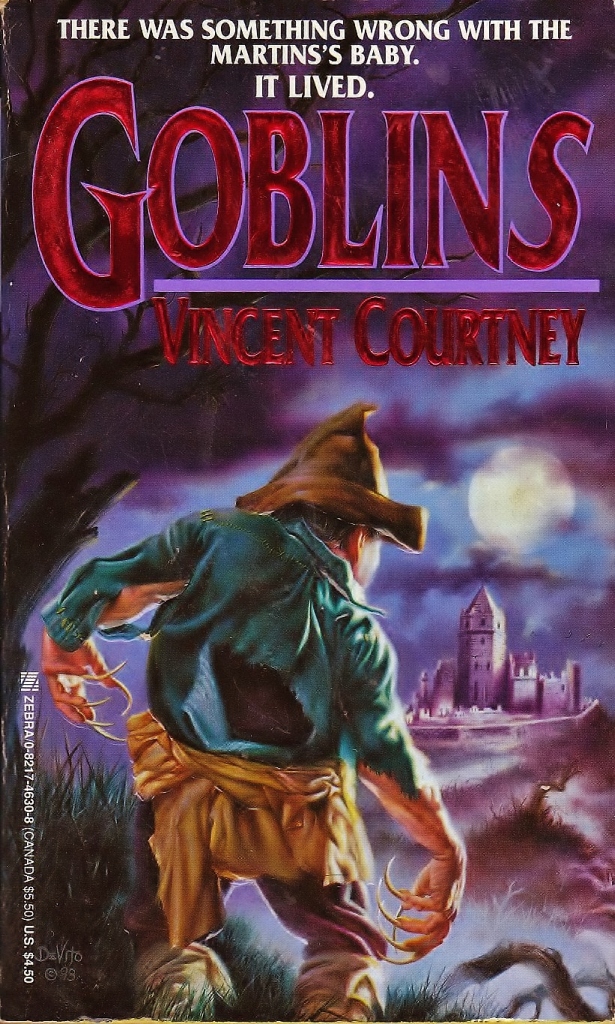 Despite routinely passing its old location, I’d forgotten all about the store and its grisly offerings. Just one glance at “Paperbacks from Hell” brought it all back to me; wiping away my doldrums like a pulpy hit of Prozac. I quickly ordered TWO copies, one for David and one for myself, while contemplating a fun way to gift it. Then it hit me; why not embellish this book with a few of those old ones? Naturally, the first step was searching the Internet but this quickly evolved into visiting used book stores on foot. As a lifelong collector of everything from comic books to dinosaur models, I know full well that despite the ease of online shopping there’s still something to be said for the good, old-fashioned thrill of the hunt! Not to mention there were so many offerings during their golden age (early ‘70s through early ‘90s), I’d stand a much better chance of spotting something obscure on a store shelf anyway. The trick was finding the right shelf. 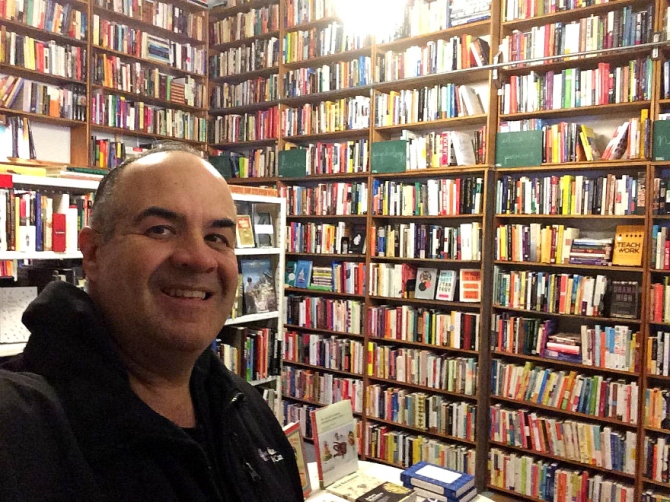 My first stop was in Schererville, Indiana at a place called “The Cat’s Tale.” Figuring I couldn’t go wrong with a cozy little moniker like that, I walked inside full of anticipation. It looked so quaint from the outside I had visions of seeing a stone fireplace behind a wise, old sage blowing the dust off an ancient classic before guiding me to the treasures I sought . This fantasy quickly dissolved after walking inside and witnessing what can only be described as a tornado hitting a library. Books were strewn about pell-mell with many covering the floor and blocking the aisles. As for my “wise old sage,” she was in her mid-thirties and so focused on her laptop, she barely glanced when I triggered the welcome chimes. After an hour of tripping over books I was disappointed to discover there wasn’t much in the way of horror. I was about to leave when I spotted the familiar Zebra Books logo. In terms of ‘80s trash novels, Zebra and Leisure Books were pretty much at the top of the heap! Best of all, it was written by one of my favorite, forgotten authors.

At an age when everyone was talking about King and Koontz, the far more ambiguous William W. Johnstone was no less active. He’d pen over two-hundred books, mostly westerns, along with twenty-five horror titles including this one, “The Uninvited” (1988). It’s about an army of mutant cockroaches terrorizing a small Louisiana town and I remember thinking at the time, “David, ole ‘bug guy,’ ole buddy, ole pal…I’m sorry but this one stays with me!” And in the blink of an eye, my new horror paperback collection was born.

As soon as I got home I opened the cover and was inundated by that glorious “old book” smell. I do love those musty fumes despite their denoting chemical breakdown and the novel’s decay. Regardless of its fragility, this one was in fairly good shape with relatively few creases. I’ve always been gentle with my paperbacks and never understood folks opening theirs so widely they crack the hell out of the spines. Unfortunately, this would prove more the rule than the exception.

My next purchase was via eBay and featured another popular Zebra Book author, Ruby Jean Jensen. I haven’t read this one yet, but what made the transaction so memorable was its seller.

She sent me a message thanking me for my purchase along with a Wiccan blessing. I told her I appreciated it, as I could use all the White Magic I could get these days. Later, after the book arrived, I discovered she’d added a small bag of charms, a personal prayer, and medallion featuring a figure eight (symbol for overcoming obstacles). Once again, those old paperbacks inadvertently brought joy.

I finished reading “The Uninvited” in less than 24 hours and decided my next one would be “Incubus” by Ray Russell. This was another online purchase and caught my attention due to my familiarity with the 1982 film. Though the movie is pretty dull, the same can’t be said for it’s source. “Incubus” would be the second novel I’d finish inside a day, and to think I’d been having trouble finishing books this past year on account of getting too sleepy. Who knew the answer to my short attention span was simply finding material with a lot more sex and violence? And this tale, featuring a medieval demon murdering women with his enormous penis while leaving gallons of semen in his wake, had plenty of both! (Hey, I warned you this wasn’t gonna be like the Hallmark Channel)

Now that my new horror paperback collection was underway, I needed to get back to my original mission of David’s gift. Unfortunately, after visiting several bookstores and thrift shops, I’d consistently come up empty. This would all change with the discovery of “Bucket O’ Blood Books and Records” which would not only be a random find (and with Christmas just over a week away), but prove a one-stop-shop! This Chicago store specifically caters to horror and sci-fi and had a large large selection of used books! Talk about a holiday miracle!

Thankfully, they were affordable enough for me to send multiples with David’s gifts as planned. I may not have been able to bring him with me on this adventure, but was determined to send him a bit of my own Used Bookstore instead. 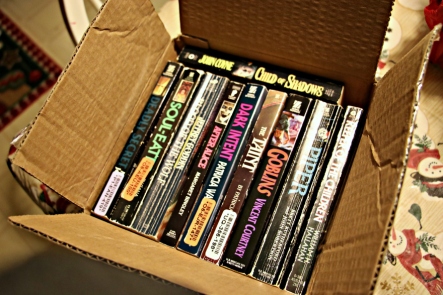 For around $50 I got a large brown bag full; plenty for both of us Daves. Most weren’t in collectible condition but fine for reading purposes. When I’m done, I figure I can always go back and trade them in for more! 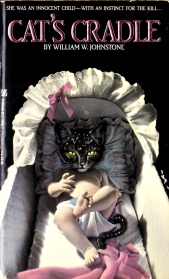 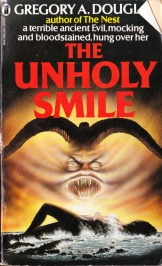 I asked the owner how often they replenish their stock and he suggested I visit every couple months or so. He also admitted it’s been a challenge keeping used horror books on the shelves these days .

The man rolled his eyes. “There’s this book that came out called ‘Paperbacks from Hell,” he said. “Now everyone’s out looking for these damn things. Drives me crazy how impressionable people are.”