Shinji Higuchi is a talented anime’ & SPFX artist who began his career with giant Japanese monsters as an uncredited assistant in Godzilla 1985. He’d later prove himself a master at his profession in the Gamera trilogy as well as a host of other projects before finally returning to Godzilla in 2014. After the success of Legendary’s Godzilla a contractual loophole meant TOHO Studios had a small window to legally create another film with their prized monster. Higuchi would helm the new Shin Godzilla’s design as well as the films SPFX, garnering him the Japanese equivalent of an Academy Award. Shin Godzilla (Godzilla Resurgence) would prove a critical and box office success in Japan while receiving mixed reactions from Godzilla fans in the United States. Higuchi was the guest of honor at G-FEST XXIV where he participated in an interview panel that Saturday. The following photos and narrative were taken from that event… 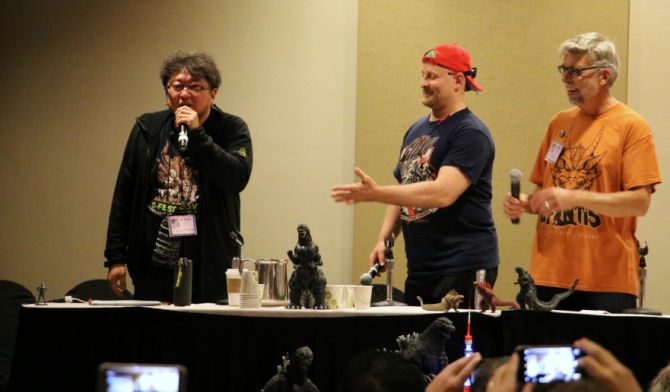 Higuchi: I can’t believe there are so many people outside Japan who love Godzilla. I want to let you all know that despite all the explosions, no military man was killed in this movie (audience laughs).

Can you tell us a little bit about your background and how you got into the Kaiju film business?

Higuchi: I was born in 1965 so there are probably a few people here that are the same age. When I was growing up, both my parents worked so I would come home and be by myself. I didn’t have any friends in school so Ultra-Man and the monsters on TV became them instead. Even now as an adult I am still a child in that regard. In 1977 I was just going into Junior High when a really amazing movie came from America, STAR WARS. Most people who liked Kaiju at the time switched to STAR WARS instead. Then ALIEN and all these amazing Special Effects movies came out of the United States but I still loved the old school monster effects of Japan which is probably why I have very few friends even now (audience laughs). After I’d graduated from high school, it had been over ten years since a Godzilla movie had been made and he was growing in popularity again. I wanted to see a new Godzilla and when I learned they were filming another, I wanted to be where the action was. This is where history was made as it changed my life. Back in the day, almost anyone could enter just about every studio in Japan freely. Then, because the Godzilla project (referring to Godzilla 1985) was so top secret, everyone started needing badges and clearance. I did not have an ID card and never thought I’d be allowed in but I was willing to do anything they needed and was given access. My first job was just helping the actor get in and out of his Godzilla suit.

Soon they started asking me to help out with the suit itself, assisting the people who created it. I was always next to Godzilla when he was being filmed in that movie and would have to spray his mouth just before he was ready to shoot his atomic breath. Those were shot via remote control but I was never able to use them; just change their batteries (audience laughs). Back then they used piano wire to move Godzilla’s tail. In order to erase the wire from showing up in the picture, we’d have to spray paint it the same color as the background. Sometimes I’d have to move the tail myself. The Director of SPFX would say, “We want you to move the tail a certain way but you can’t be in the picture.” By the time Godzilla 1985 was made, many of the experienced SPFX crew who worked on the older Godzilla films were no longer with the studio and this movie represented a change from the old Kaiju creators to the new ones. Almost half the staff were freelance and knew nothing about making Kaiju films. They wanted to make something like STAR WARS and there just wasn’t any way we could do that. After that experience I moved from Tokyo to Osaka. Although Osaka and Tokyo aren’t far apart from one another, they’re very different in terms of style and culture. I began working with the college kids out there and making short films but, because they were students, we only had from Friday through Sunday to do it. While they were in school I’d be by myself making miniatures. We would just go to the nearest park as our location and with no authorization….I’m so ashamed (holds head down while the audience laughs). We couldn’t use big explosive so we used firecrackers instead to blow up the miniatures. We’d try and find places with few police or firemen. One day we made a miniature gas station and blew it up. This is something we did thirty years ago and could never get away with today. 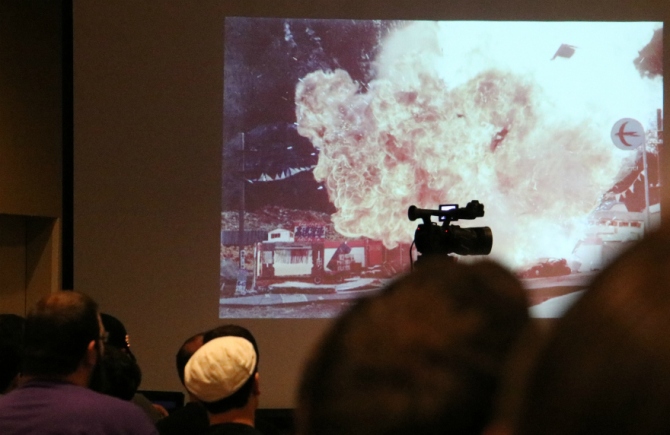 How did Shin Godzilla come to be?

Well I hope nobody from TOHO is listening, but they are a crazy company. (audience laughs) Most Godzilla movies are filmed till the end of the year but they wanted this one done by October. We kept arguing that we needed more time but due to the contract with Legendary, we only had a small window to make a movie before they assumed full rights up until 2020.

We had it ready by the summer 2015 so it wouldn’t interfere with the release of the Legendary films. We were able to get it done on time and then they postponed its release an entire year. I wish we had known this and were given more time because we were working on Attack on Titan while starting Shin Godzilla before it was finished.

When will TOHO make another Godzilla film?

Haguchi: Due to their contract with Legendary, TOHO cannot make another Godzilla movie until after 2020. (Audience Boos) Well c’mon you’re going to be getting Godzilla vs King Kong and that should be pretty cool! 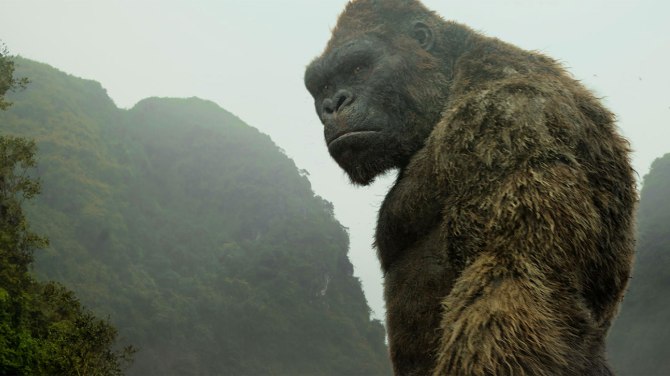 How did the design of Shin Godzilla come to be?

Higuchi: We were given a script but didn’t know what kind of Godzilla we were going to make. TOHO wanted us to take the best features from the past while creating something new. We wanted to do a movie where Godzilla “transforms” throughout the picture but every time we came up with something (many involving Godzilla growing another head) they’d reject it. 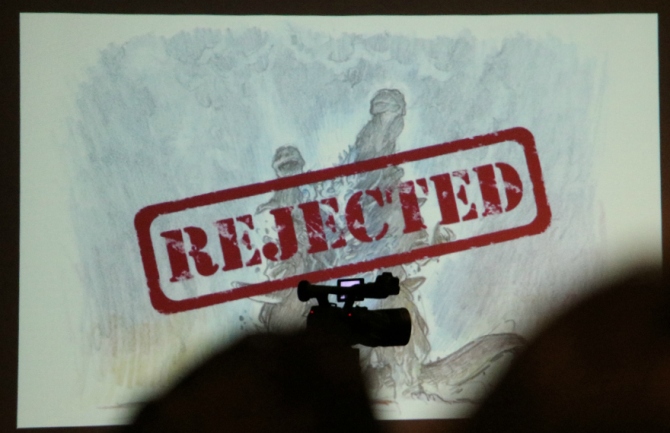 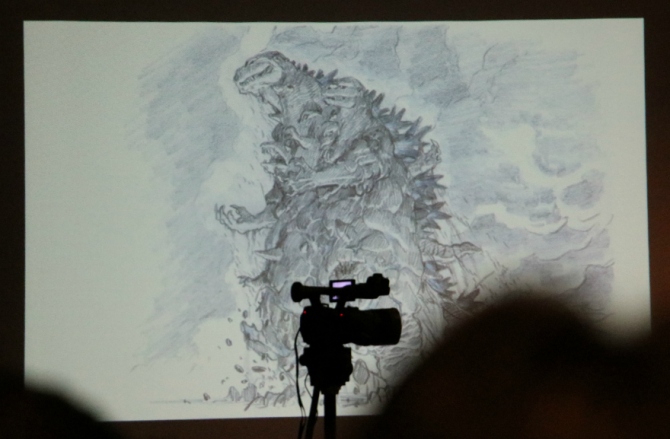 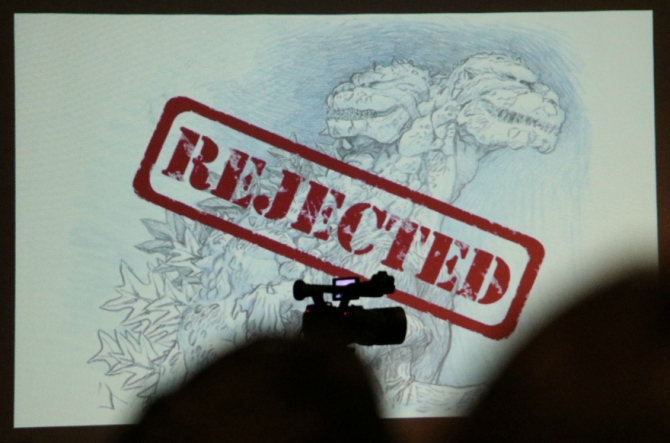 Finally, we decided that instead of having Godzilla start out in his usual form and evolve from there we’d have him start off as something unrecognizable and gradually become the more standard looking monster. TOHO said as long as we did it this way than they’d give us the “okay.”  As for the new “original” Godzilla we reviewed different designs before finally settling on the one we used. 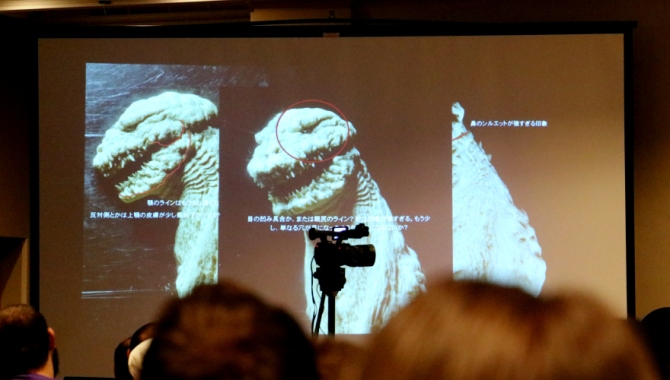 How was it working with a CGI Godzilla vs a man in a suit?

Higuchi: One advantage of CGI was with regard to the tail. As I mentioned, one of my first experiences working with Godzilla was using wires to move it. This was a standard practice with Godzilla and meant that his tail was always roughly the same size. Now, with CGI, I had the freedom to give him a REALLY long tail which is what I did. (audience laughs) Many ideas came from the idea of his tail taking on a life of its own. First we made it with clay and then used a 3D scanner for CGI.

For the walk, we used a real person to aid with the movements. We did it this way to give the CGI a “soul” and have the spirit of someone inside it coming to life. We used a guy we nicknamed “Red King” after the Ultra-Man villain because he had no shoulders. He had only one request, he wanted to wear a Godzilla mask, tail, and dorsal spikes when performing so he could feel the part.

CGI works better for far away rather than close-up shots. We did use an upper body model for those. We also used both miniatures and CGI for buildings. There were arguments about this behind the scenes as many just wanted to use CGI. From a personal point of view, I enjoy the models and prefer them in closer shots. CGI is always upgrading so you might be an expert at something that becomes outdated three years later. Also, when multiple film companies are using the same program it gives movies too similar a look. Everyone asks me which is better, CGI or live action, but that’s not something you can easily answer as both have their advantages and drawbacks.

Since the previous Godzilla movies were not big hits in Japan, how do you explain the success of Shin Godzilla and were you surprised?

Higuchi: I was surprised by its success. I think maybe part of the reason that it was, was because it had been over ten years since the last Godzilla film and a whole new generation of filmgoers were curious. The studio also did a great job keeping trailers vague and the image of Godzilla a secret. So there were no spoilers right up until its release.

Is there a future for the Shin Godzilla?

It is likely that whomever takes the reigns of the next Japanese Godzilla film, they will want to make their own version (a.k.a. Shin Godzilla is probably a stand-alone)

Would you ever get involved in another Godzilla film if asked?

If they asked me to do it, I definitely would. 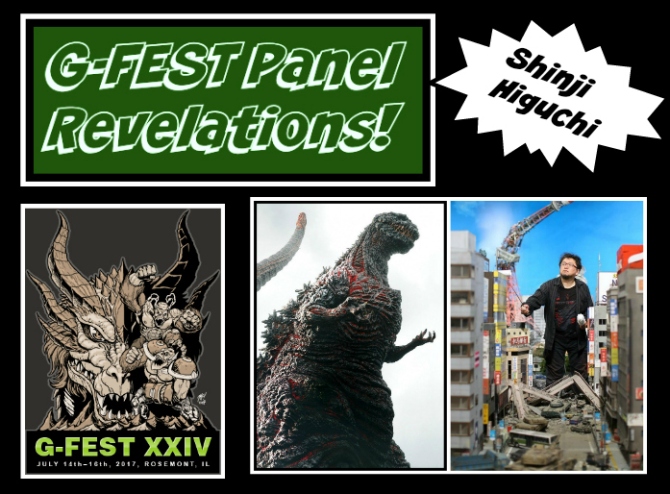