Terror from Beyond the Daves is pleased to welcome guest writer, Mark Spangler, and his nod to a screen legend we horror fans may have overlooked. 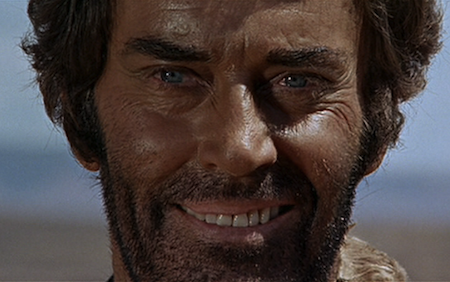 We’ve come to know our horror screen legends as one of the family.   Not that you’d want Jason Voorhees, Frankenstein’s monster or Pumpkinhead as frequent dinner guests (imagine the mess), but there’s something safe and comforting in the familiar, especially for fans of the horror genre.  This is why picking the right actor for the right role is so crucial in the world of celluloid monsters – and why unusual moves in this department often misfire.

Offbeat casting is always a hit-and-miss prospect no matter what type of film is in the offering.  On rare occasions, picking someone for an unusual role is such an inspiring idea, the very nature of the film being cast is altered.  Such was the case in Sergio Leone’s 1968 classic spaghetti western “Once Upon A Time in the West”.  The movie was not only the greatest oater ever made, the casting of Henry Fonda in the title role as the murderous railroad enforcer “Frank” was a genre-changing decision.  In many ways, Fonda’s sadistic performance ranks as one of the greatest screen villains ever depicted.  Of all people, true-blue all-American everyman Henry Fonda turned this classic western into a movie with very real horror undertones.

This kind of thing had been done before. Gregory Peck’s impressive showing in “The Omen” certainly turned heads, but that was a supernatural thriller with both feet firmly in horror terra firma.  Robert Mitchum’s performances in “Cape Fear” and especially in “Night of the Hunter” come to mind as well.  Although in no way a horror film veteran, it was hardly against type to cast Mitchum in a role that inspired dread, however.  He could, and often did, command a fearful presence on screen, no matter what kind of film he was in. Hank Fonda never did.  From “The Grapes of Wrath” to “Mister Roberts” and from “Twelve Angry Men” to “Fail Safe”, Fonda was the decent, honorable man, sometimes in a position of power, sometimes the victim of circumstance or injustice, but always the kind of guy you’d want to break bread with.  That is, until Frank came along with his smoking revolver and eerie harmonica.

Fonda spoke, almost incredulously, of his casting as Leone’s heavy in a 1975 interview, widely available on Youtube.  In it, the aging actor described how he altered his look to appear more sinister to the director.  Fonda showed up for shooting in Italy with brown contact lenses and an evil villain moustache – much to the dismay of Mr. Leone.   “He was buying the baby blues.” Fonda humorously recalled.  It may have been the boldest offbeat casting move ever done with a major film star, and it worked magnificently.

In Fonda’s opening sequence we see him in silhouette – never sure until a brilliant, slowly-revolving close-up that it’s really him – as he guns down a small child, after he and his murderous gang have already killed a young girl and her father.  We find out pretty quickly that this ain’t Tom Joad…  and Frank came to play a very unfair game.

So jarring was the juxtaposition of the clean-cut actor and the villainous role that the camera had to linger on the weathered face and the previously mentioned baby blues so we could all get a real good look at who was wearing the black hat. “Jesus Christ… it’s Henry Fonda!” the man himself said in discussing the role and that classic opening scene.

All throughout the movie, we have an almost visceral feeling of dread every time the action shifts from the three other main players in the film, Claudia Cardinale, Charles Bronson and Jason Robards. We can tolerate Frank lingering in the background as long as there is some sense of decency on the screen to divert our attention.  None-the-less, the picture always reverts back to Frank and we don’t just hate his guts every moment he’s on the screen, were afraid, actually afraid of what he might do next.  After all, how much lower can you get when your introduction to the audience involves you gleefully gunning down small children?   It isn’t just what Frank has done that frightens us, but the knowledge that he’s capable of doing just about anything that holds us coldly by the spine whenever we see him on screen.   We suspect that, although he is in the employ of corrupt railroad barons, he most likely would take the chance to pull his sadistic madness on anyone for the sheer joy of killing.   In this the character has much more in common with the horrors of Michael Myers than a typical western villain.  (Although Bruce Dern in “The Cowboys” was pretty damn evil too!)

The climactic scene involving Charles Bronson is supremely satisfying if for no other reason than Leone manages to pull off a terrific flashback sequence that finally answers the mystery of the connection between Frank and his no-name nemesis.  The flashback, however, is wickedly sadistic in its own way – and highly unsettling.  We see a younger Frank with his twisted and sick personality already manifested.  Obviously killing in the most perverse way is nothing unique or new when it comes to Frank.  He’s been at it a long, long time.

Clearly, “Once Upon A Time in the West” cannot be listed as a horror film.  Yet a convincing argument can be made for Henry Fonda’s performance in it as being in the classic horror vein – in fact, perhaps a bit beyond what we’d see in a classic horror film.  By the 1960’s and 1970’s, filmmakers, especially those of Italian lineage, (Bava, Fulci) were breaking new ground all the time with their horror and mainstream cinematic efforts.   It should come as no surprise that Dario Argento was a driving force behind the more horror-inspired elements in the screenplay… his imprint on the narrative is unmistakable.

Fonda would never again perform a role as delightfully evil as the one he played in “Once Upon A Time…” but then again, he wouldn’t have to.  He proved why he was one of America’s finest actors by hitting a grand slam the first and only time that it was required of him in a genre-bending performance for the ages.