This year’s Flashback Weekend offered something different from previous years and specifically geared towards younger horror fans; a screening of the 1967 Rankin/Bass Mad Monster Party hosted by national commercial TV horror host, Svengoolie! Though not as popular as the animation team’s Christmas TV specials (Rudolph the Red-nosed Reindeer, Santa Claus is Comin’ to Town, The Year without a Santa Claus, etc.) this full-length film featured the voice work of the legendary Karlos Borloff as well as Phyllis Diller!

The event took place on a Sunday afternoon and kicked off with a brief discussion on the film from Rankin/Bass super fan, Rick Goldschmidt (author of several books and portfolios on the subject that you can check out at his site HERE). Goldschmidt has amassed a huge collection of merchandise and goods from all their works and showed off some of them on a past Svengoolie show. 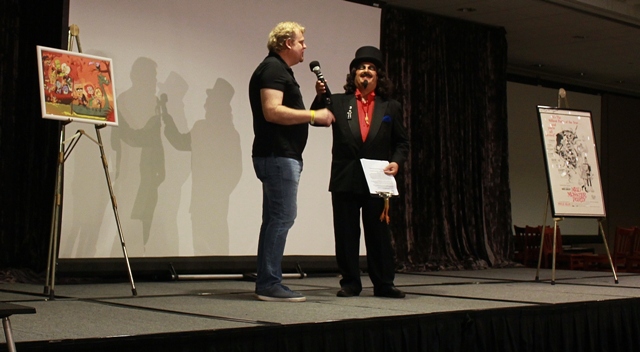 My assignment today was to assist the crew with selling Svengoolie T-Shirts. What’s that? You mean to say you don’t own a Svengoolie glow-in-the-dark Chicken Thrower T-shirt??? Well then check this out…

Or you can take an ordering shortcut and click HERE!

So to give you an idea of the layout, Svengoolie was on stage and there were two tables on the left of the audience; one for the shirts and another where he’d do an impromptu signing (not scheduled). I sat at the shirt table with a pretty good view of the stage. I really thought it was going to be a cushy job but those shirts ended up selling like hotcakes!

Just like a regular Svengoolie show, Mad Monster Party would have breaks where he’d entertain viewers with “Live” skits and parody song footage from past shows that aired on local Chicago TV before he went national over four years.

My friends Don and Bunny were called up to assist him with one of his skits and it was pretty funny.

Don & Bunny bring in the Funny! 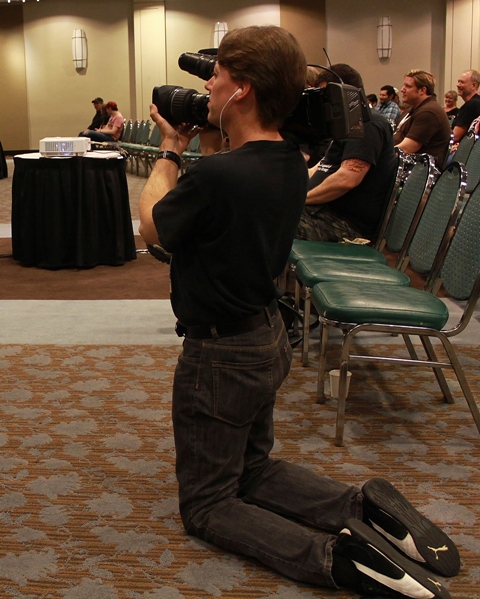 Sven also did a “Family Feud” game show and later one of his famous “Words from Pictures” games! 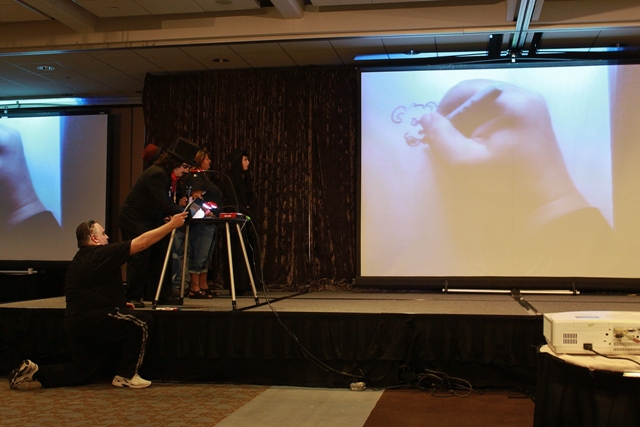 They even did a Svengoolie version of Bozo’s Grand Prize Game. In this version a ping-pong ball was swapped out for a small rubber chicken!

The signing took place in the dark (save for the soft glow of those T-shirts) during the last portion of the movie. All in all, it was a great event and I could see Sven having a successful career doing “Live” shows in the future. The audience was very satisfied too as they went out of their way to tell me how awesome he was…just before asking if those Sven shirts came in size medium!

And this concludes my coverage of this year’s Flashback Weekend! Stay turned for more Svengoolie coverage from his busy Halloween tour of appearances!