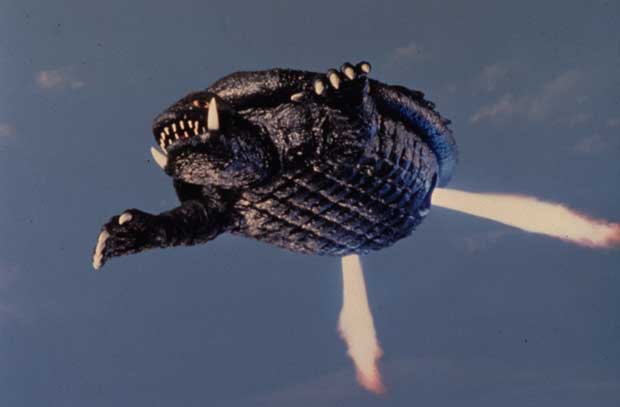 On Saturday July 11th a gathering of Gamera (Japan’s 2nd most famous monster) fans celebrated the giant turtle’s 50th birthday! It was one of the highlights of this year’s G-FEST (Godzilla Festival) as the kaiju reptile was a favorite of mine growing up back in the ‘70s. Though I prefer reliving those films via Mystery Science Theater 3000 these days, I believe his 1995 return, Gamera: Guardian of the Universe, is one of the best in the genre. The “50 Years of Gamera” panel was moderated by August Ragone and Kyle Yount. This was another big draw for me as I’ve wanted to meet Mr. Ragone for some time now. His contributions to both the horror host realm as well as Japanese monster fandom is far too numerous for me to list here. Suffice it to say, we encourage everyone to check out and follow this Rondo Award winning writer/commentator on his own blog, The Good, the Bad, and the Godzilla. Yount moderates his own Kaiju themed podcast, appropriately named KaijuCast which you can check out HERE. 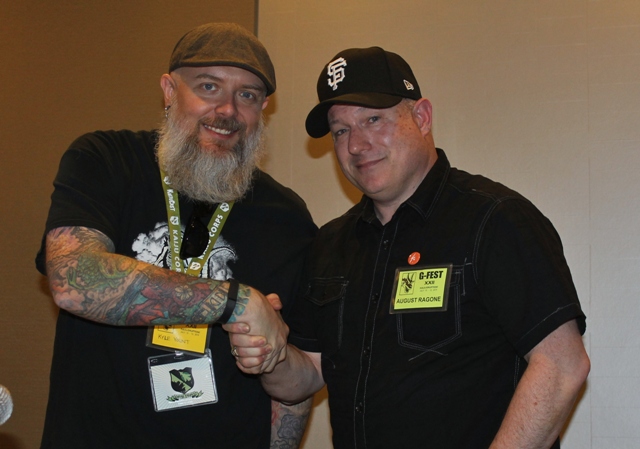 We’ve known of August Ragone for some time and he’s a true monster kid we Terror Daves can totally relate to! I was reminded of this early in the discussion when he spoke of waiting for the new TV Guide to be released on Tuesdays, so he could circle any monster movies he wanted to see in the coming week. Both David and I had discussed during our road trip earlier this year how we both performed this same ritual. It proves that no matter where you grew up, we all seemed to share a common bond. But let’s move on to the subject of today’s post…

The old Gamera series was brought back to popular culture in many ways thanks to Mystery Science Theater 3000 in some of their best presentations. In fact, August did commentary for the Gamera MST3K Box Set and many of the tidbits shared in this post can be heard there (and, I assure you, this stuff is way more entertaining when you hear it directly from August). But here’s some highlights shared at G-FEST…

Gamera (1965): Directed by a young, Noriaki Yuasa, this film was a surprise hit for Daiei Film Co. Ltd. The original concept for the film was actually giant rats. Rather than use a suit monster, they opted for filming live ones that they’d later superimpose (think Food of the Gods). The decision would prove disastrous as the rats used were wild caught as opposed to captive bred; leading to an outbreak of fleas. The set soon became a rat bloodbath as the filmmakers began exterminating their antagonists! After seeing a cloud (or an island, I wasn’t quite clear on that) that resembled a turtle, the entire concept changed over and it was decided that a suit actor would used. The film was a surprise hit and, from the beginning, Gamera struck a chord with younger fans. The child featured in the movie is a source of contention amongst viewers who either love or hate him. Even the panelists were divided on the topic as Yount stated he loved the kid while Ragone thought he was “totally insane.”  Though purists may think it blasphemy to like the campier “dubbed” American versions of these films, August prefers them this way and mentioned that one of the actors added to the American version of this film, Gammera the Invincible, was Alan Oppenheimer who would go on to voice Skeletor in the iconic ‘80s cartoon He-Man: Masters of the Universe. 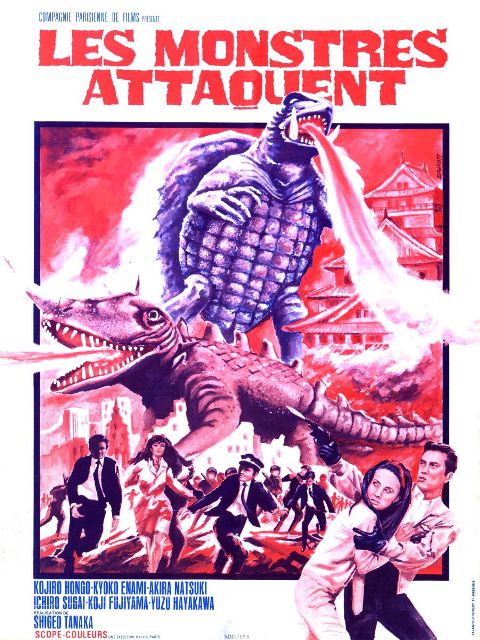 Gamera vs. Barugon (1966): Daiei decided to hand Gamera’s first sequel over to a more seasoned director, Shigeo Tanaka. This film had a darker tone than its predecessor as Daiei became more competitive with TOHO Studios. There’s a flashback scene in this film that was extended by ten minutes to please television stations in the United States. That version would later make its way back to Japan as an “Extended Foreign” cut. The movie went straight to TV in the US courtesy of AIP (American International Pictures) under the title War of the Monsters and underperformed in Japan. The original concept of this movie was for Gamera to fight an ice giant from space (essentially making it a battle between fire and ice). While this foe never saw its way into a Gamera film, it later would evolve into Daimajin. 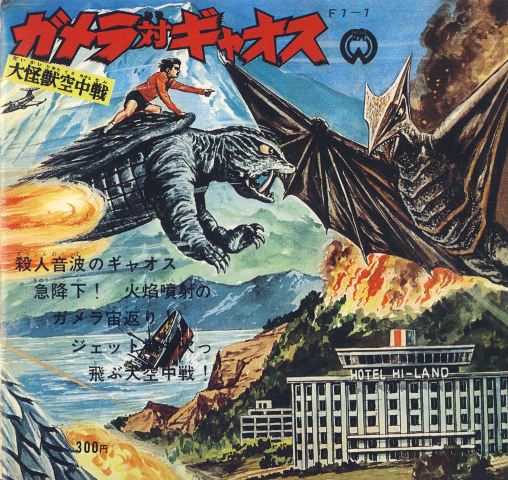 Gamera vs. Gyaos (1967): Due to the lackluster box office of the previous film, Daiei brought back director Noriaki Yuasa for Gamera’s third outing, Gamera vs. Gyaos. Gyaos would end up becoming Gamera’s most famous foe and Yount suggested he was to Gamera what King Ghidorah was to Godzilla. Ragone would site this as his favorite in the series, enthusiastically proclaiming Gyaos as a “badass with his own laser scalpel.”  Indeed this was the first movie showing the giant turtle bleeding…though not the last. The original title for this film was Gamera vs. the Vampire. It was released in the United States by AIP as Return of the Giant Monsters.

Gamera vs. Viras (1968): Of all the ‘60s Gamera films, this one has always been my favorite. I’m thinking it’s because I was always fascinated by cephalopods (squids and octopus) as a kid plus the movie had lots of flashback scenes with Gamera’s previous foes. When you’re a little kid who wants to see lots of monsters, this film delivered! In fact, AIP wanted it to be seen as a Gamera version of Godzilla’s Destroy All Monsters and renamed the movie Destroy All Planets for its US release. There were two things August said during this discussion that had me chanting a geek version of “Amen.” One was getting blown away by the unexpected “head chop” scene and the other was proclaiming the alien spaceship as one of the most unique and “out of the box” designs. Again I say….Amen!

Gamera vs. Guiron (1969): As Ragone gleefully stated during the discussion of this film, “You never forget your first Guiron!” Follwed by, “Who wouldn’t love a monster that’s a giant steak knife?” This movie was the first to show Gamera fighting on another planet as well as the return of an old foe; a space version of Gyaos – which was the old Gyaos costume painted silver.

Gamera vs. Jiger (1970): One of Ragone’s favorites with Yount commenting on how much he loved the name of the film’s Tiki statue (The Devil’s Whistle).  Was released in the United States as Gamera vs. Monster X and filmed at the 1970 World Fair in Osaka, Japan. 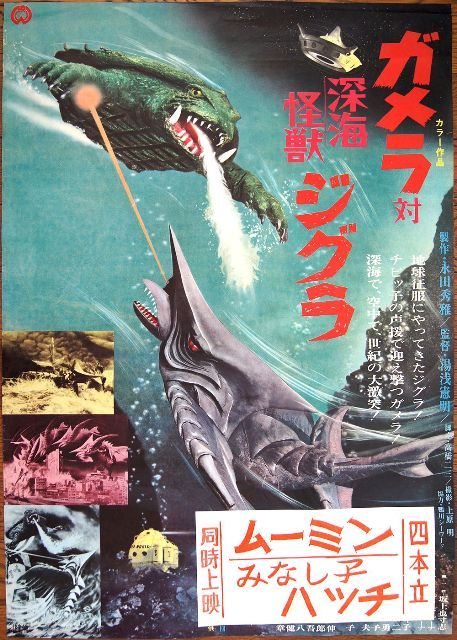 Gamera vs Zigra (1971): The panelists describe this as the last “gasp” of the Gamera series and that “the less that’s discussed the better.” Plagued with numerous production problems at one point Daiei stopped paying the crew who promptly trashed the entire set. Zigra is Kaiju version of a goblin shark and, unlike its predecessors, was not released by AIP to American television. American producer, Sandy Frank, would bring it stateside in ‘80s via home video.

Space Monster Gamera (1980): Daiei would experience its share of financial problems and, for a time, their main rival, TOHO, had control of their holdings when they went bankrupt. Eventually they were purchased by the Tokuma Shoten publishing company that patched together this film featuring “a cast of about six people” and comprised of Gamera stock footage from all his previous films.

The hour went by way too quickly as both Ragone and Yount were highly entertaining. After wards I met Ragone finally in person and we talked a bit about Godzilla as well as his experiences with the legendary horror host, Bob Wilkins. He grew up with Wilkins as his host and eventually got to know him personally. As I said, we had a lot in common.