Many (if not all) of us adult Godzilla fans first became enthralled with the “King of Monsters” back when we were kids. Director Masaaki Tezuka is no exception; tracing his love for Japan’s greatest unnatural resource at the age of  seven when his parents took him to see King Kong vs Godzilla. From then on he’d dream of one day making his own Godzilla film before finally seeing his ambitions realized nearly forty years later when TOHO Studios handed him the reigns of Godzilla vs. Megaguirus. He would go on to direct two more Millennium (1999 – 2004) Godzilla films and I remember my son and I anxiously awaiting G-FEST XI when we’d get a special big screen sneak peek of his last one, Godzilla: Tokyo S.O.S.  Fast forward eleven years and Tezuka would become G-FEST’s Guest of Honor and participate in a two-hour Q&A with us fans. Here are some highlights from that momentous occasion…

REBIRTH OF MOTHRA: Tezuka’s first foray into Kaiju directing was Rebirth of Mothra II where he served as Assistant to Director Kunio Miyoshi. His first sight of the movie’s lead insect in person made him feel “like a kid again,” compelling him to reach out and touch the Mothra prop (and who amongst us wouldn’t?) before being admonished with a stern “Don’t touch that!!!” from the film’s SPFX supervisor.

TRI-STAR GODZILLA: While most fans recoil at the mention of the 1998 American Godzilla movie, Tezuka admits he liked it even if none of his other contemporaries at TOHO did. This, however, should not imply that he felt the film worthy of its title. “It should have been called Attack of the Iguana and not Godzilla,” he said. 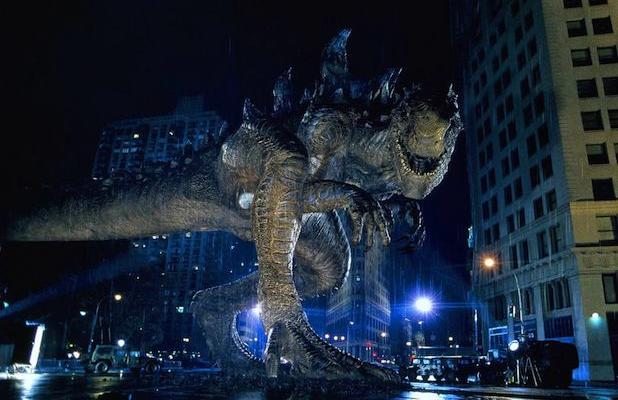 GODZILLA 2000: Tezuka was decisively less kind when describing Godzilla’s Japanese return in what was billed in the United States as Godzilla 2000. Not only did he admit to hating the movie, he described its creators as “too cocky” and “not true Godzilla fans.” At which point I sunk in my seat (I remember going to see Godzilla 2000 several times when it played at my local theater).

TOHO’S OFFER OF A LIFETIME: After being hired at TOHO, he worked “every day for six years straight” in the hopes that his hard work wouldn’t go unnoticed. It eventually paid off when the studio asked if he would like to direct their follow-up to Godzilla 2000, Godzilla vs. Megaguirus. While Tezuka admits that inside he was yelling, “Oh yeah, Baby!!!” he knew that eagerly  accepting the offer outright would be “bad form.”  In the Western world it’s considered rude to refuse a gift or put off a generous offer while in Asian culture the opposite is true. “It makes you look cheap,” Tezuka explained. Suppressing his elation, he’d wait a full week before calmly answering, “Yes…I’ll do it.”

GODZILLA VS MEGAGUIRUS: When TOHO asked Tezuka who he wanted as the film’s lead, he broke with tradition and opted for a female. “I like women,” explained Tezuka with a smile. The film was a critical, if not box office, success and well received from fans…for the most part. One common complaint is a rather unnatural “leap” performed by Godzilla during the climactic battle with Megaguirus. Tezuka stated he had told the SPFX supervisor, Kenji Suzuki, that  he could “do anything” but later informed him that the Godzilla jump was “too much.” Suzuki reminded him of the freedom he’d been granted and left the shot as is. Later, when Suzuki expressed interest in working on Godzilla Against Mechagodzilla, Tezuka stated he refused him based on that situation.

GODZILLA AGAINST MECHAGODZILLA:  Tezuka was asked to return for Godzilla Against Mechagodzila and he accepted (I’m guessing after a week). Once again he chose a female lead character as well as a relationship between Godzilla and Japan that was “more personal rather than just getting stomped.” According to Tezuka, he preferred Misato Tanaka’s “Kiriko Tsujimori” in Godzilla vs Megaguirus over Yumiko Shaku’s “Akane Yashiro” in Godzilla Against Mechagodzilla because he felt the latter was “too dark.”

TOKYO S.O.S: Tezuka would cite his final G film, Godzilla: Tokyo S.O.S., as his favorite. According to Tezuka he reviewed five different story treatments before scrapping them all in favor of his own. His choice of two larval Mothras was to offer the film “more possibilities” though he admitted it caused a lot of friction between Mothra’s SPFX crew and the suit actors. “If I hadn’t intervened on occasion,” laughed Tezuka, “there may very well have ended up a real-life fight between Godzilla and Mothra.”

A TURTLE BY ANY OTHER NAME: In Tokyo S.O.S., the human characters are alerted to the Big G’s presence by the discovery of a dead Kaiju; a giant turtle called Kamoebas. Tezuka stated that he originally wanted to use Godzilla’s former adversary, Anguirus, but the studio wouldn’t permit it due to the possibility of utilizing him in a future project. A frustrated Tezuka shot back, “Fine! Then why don’t we just use Gamera!?” This, of course, was impossible since Gamera not only belongs to another studio (Daiei), even in the unlikely event that he did end up on-screen with Godzilla feature (to the delight of  just about every Kaiju fan alive) it certainly wouldn’t be as “road kill.” As TOHO’s only resident giant turtle, Kamoebas was the logical alternative.

MEMORIES OF HIROSHI KIRUZUMI: “He was very polite with the crew,” recalled Tezuka. “They were in awe of him and saw him as a living legend. Everyone tried to serve him, bring him water, a chair, etc. but he’d have none of it. He’d wave them off and say, ‘I’m not that old yet!”

THE MESSAGE MECHAGODZILLA: As most Godzilla fans know, the Mechagodzilla (Kiryu) featured in the Millennium films was an amalgamation of both technology as well as genetic material from the deceased Gojira. This would incite the warnings of the Shobijin (twin Mothra fairies) urging the humans to return the old Godzilla’s remains. “The message is that the dead should be respected and left in their natural state. Life should not be unnaturally prolonged,” said Tezuka. “My two children were young at the time and I wanted to show them the importance of living a good life, regardless of its length.”

JAPANESE GODZILLA 2016: Tezuka said that he and the director of next year’s Japanese Godzilla reboot, Shinji Higuchi, are friends who occasionally “bump into each other at the supermarket.” He said that when they see each other they’re both inclined to discuss the film but their wives “won’t let us talk Godzilla.” He admitted that if the movie is successful, he’d love to direct a future installment.

AMERICAN GODZILLA 2014: Tezuka not only loved Gareth Edward’s successful Godzilla movie, he went to see it “three times” on the big screen. He claims his main motive for that third viewing was so he could get the free “Godzilla collector’s mug.” His wife joined him during that trip to the theater and told him as they were leaving that she didn’t care for the film and felt that his Godzilla movies were a “billion times better.”