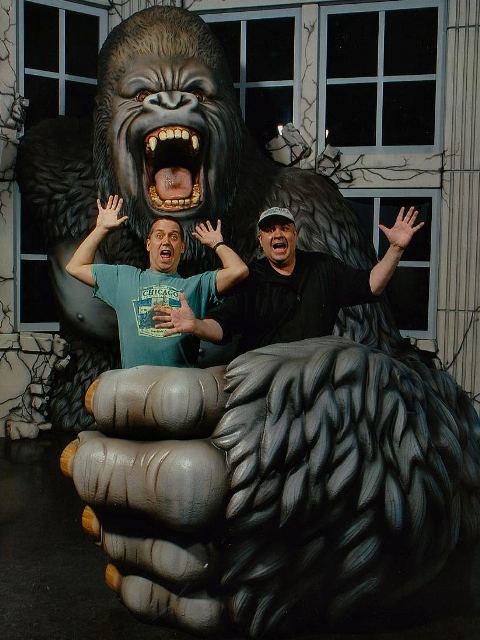 On the morning of Thursday April 2nd we bid Chattanooga a fond goodbye before heading out towards Tennessee’s Smokey Mountains.  The journey was highlighted by numerous forests, hills, and rivers which became even more scenic once the famed mountains appeared in the distance. It was a cloudy day with some fog which made them  every bit as “smokey” looking as their name implies. Everything we saw that morning was picturesque until we entered the town of Pigeon Forge and it seemed as if we’d crash landed on another planet! 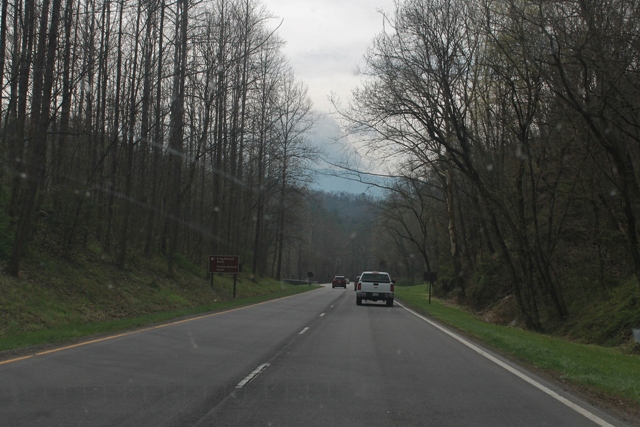 Within moments, trees gave way to commerce as we encountered an immense tourist mecca featuring all kinds of themed restaurants and unique attractions. Driving soon became a challenge as we had to try and pay attention to traffic while not being distracted by all the eye candy on either side.

David: This part of our journey was certainly highlighted by the beauty of the landscape. I actually wish it was a little later in the season, being able to appreciate the area in full bloom. I was actually at an advantage over Dave as he was driving, having to pay attention to the road. I just didn’t know where to look because everything in this area just drew your eyes to it with the bright colors and gaudiness. We were here to visit the Ripley’s museum, not knowing what we had just gotten ourselves into. We definitely could’ve spent the day here, if finances permitted! 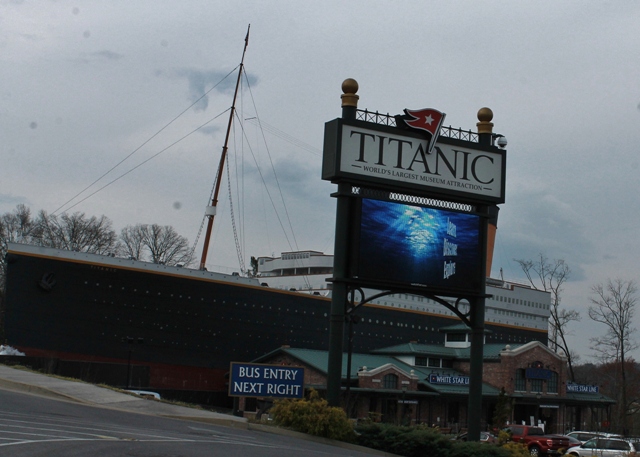 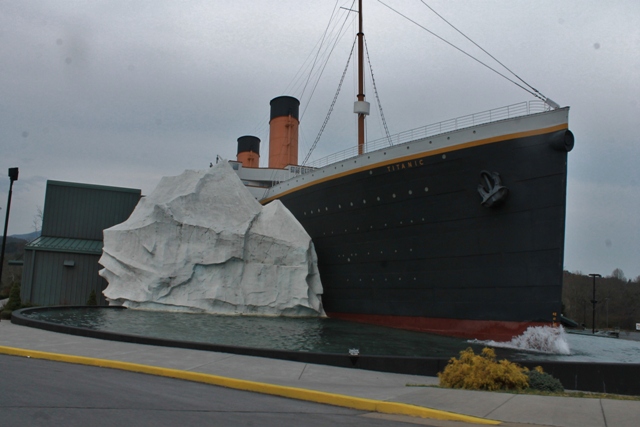 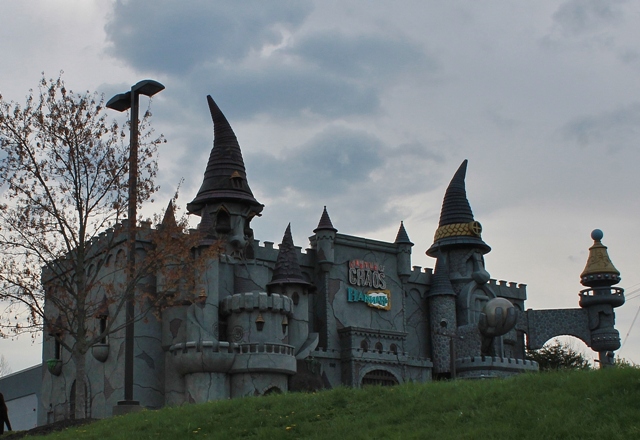 Dave: As mentioned in previous posts, I’d specifically researched weird sites and attractions that would add interest to this road trip while heading out towards our intended destinations (which on this day was the Knoxville Zoo). I’d added Gatlinburg’s Ripley’s Believe it or Not? to the itinerary since we’d had so much fun at the one in Baltimore last year (covered HERE), but didn’t bother doing any further research of the area. I assumed that with a zoo and museum of oddities on the agenda, we already had enough activity for one day. I could never have imagined how wrong I would be! The best way I can describe our entering Pigeon Ford is like driving aimlessly through a desert before unexpectedly encountering Las Vegas! Clearly this was designed for family fun (and family dollars) and not a couple of guys like us who know what we like and plan accordingly. I told David, “Jeezus, what a tourist trap! I can’t believe people actually fall for this stuff! I mean, really I…

Sure as day, on our right was a replica of the Empire State Building complete with the “8th Wonder of the World” himself, King Kong. That was it…we had to turn around and stop!

David: Dave really does an amazing job planning these trips and every now and then on this one, something new that we did not foresee would pop up. Such was the case with the Hollywood Wax Museum. We could not get into this place quick enough. The highlight was definitely the King Kong replica photo op which truly was a fun way to start our visit. The museum was full of recognizable people, most of which were very lifelike and easily recognizable (though on some occasions, the artists totally missed the mark). It amazes me that with places like this that so many characters can be spot on and then others, you need the signage to find out who they are and even then you find yourself scratching your head! 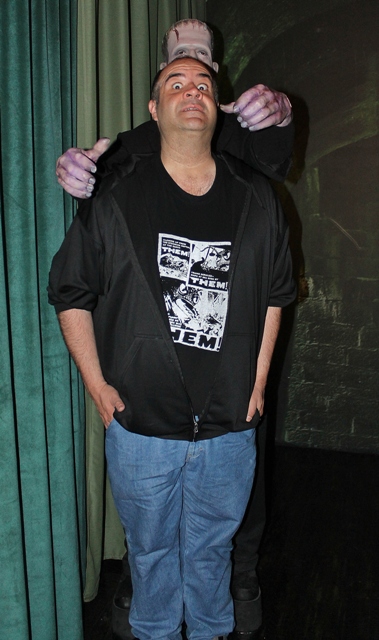 Dave: We left the Hollywood Wax Museum and  went straight to Gatlinburg nearby. In this regard, we were far from alone! The streets were littered with families (the downside of doing a road trip the same week that most kids are on Spring Break) and had the dubious task of dodging pedestrians while ogling yet another onslaught of unique businesses. We finally found a place designated for parking (featuring the slowest ticket machine known to man) and made our way across the street to Ripley’s Believe it or Not?. Last year, in Maryland, we practically had the whole place to ourselves but this year would be an entirely different story.

David: I really enjoy places like this. It is great not only seeing the creative ways that these places advertise their offerings but it is great for people watching as well. Everything about Gatlinburg was entertaining and someday I would love to go back and check out some of the things we missed (and with how many things there are I am sure we missed plenty). 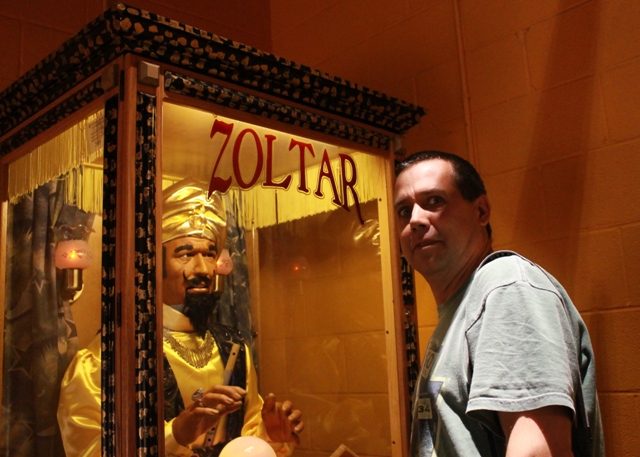 Dave: We returned to Pigeon Forge with the intention of stopping at a couple more attractions we’d noted on our way in. One was an upside-down house called “Wonder works” which we wanted to get a picture in front of without paying to go inside. The next stop, however, would have us back to digging in our pockets. 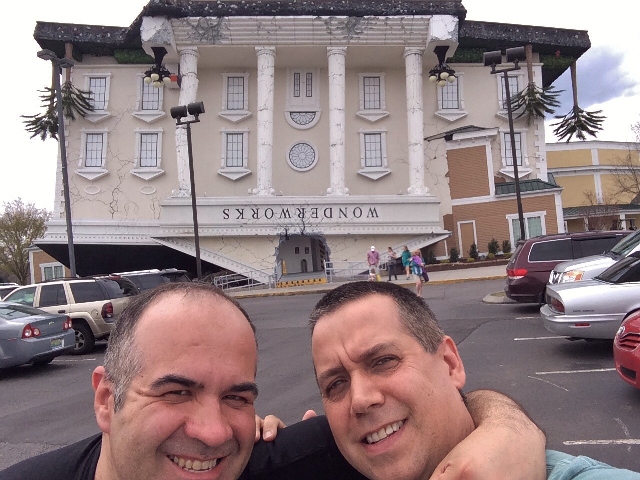 David: Since both Daves are monster fans, it is only natural that we love dinosaurs as well, the earth’s true monsters (besides humans of course). I have always been a fan of what are known as dark rides, carnival rides where you are in a car on a track that rides through a dark building and things jump out at you. Though not cheap this attraction was a lot of fun and worth every penny. The dinosaurs were great looking and the set-up was top notch. I just wish they offered a ride through with the lights on to see everything in all of its glory (but then again, maybe that would be even scarier)! 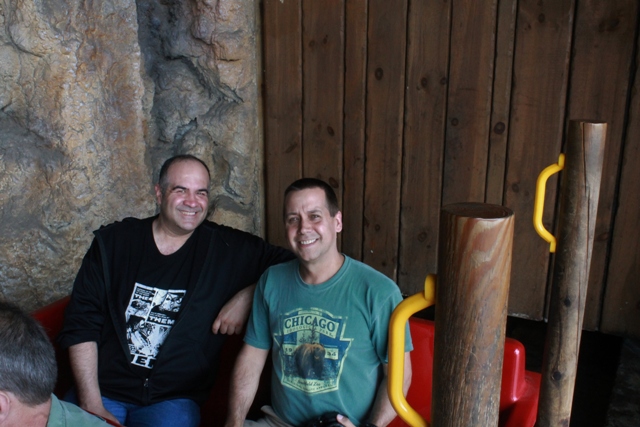 Dave: Despite our visit to Ripley’s, our biggest “Believe it or Not?” of the day was managing to do all the aforementioned activities BEFORE lunch! By this time we were famished and trying to figure out which one of the 500 novelty restaurants we wanted to eat at. We ended up settling on a ‘50s diner called “Happy Days.” We both love the fabulous ’50s and have been fortunate to occasionally find throwback type eateries on past trips.

We finally made it to the Knoxville Zoo that afternoon before heading into Kentucky. As fate should have it, yet another unplanned destination revealed itself as we entered “the bluegrass state” at dinner time and saw signs for the very first Kentucky Fired Chicken in Corbin. Although this chain of restaurants was never the same to me since the Colonel died and took his “original recipe” with him, we couldn’t pass this up. It featured a diorama, museum of KFC artifacts, and the original kitchen utilized by the man himself. Despite being fast food it maintained an air of class with wooden tables and chairs. 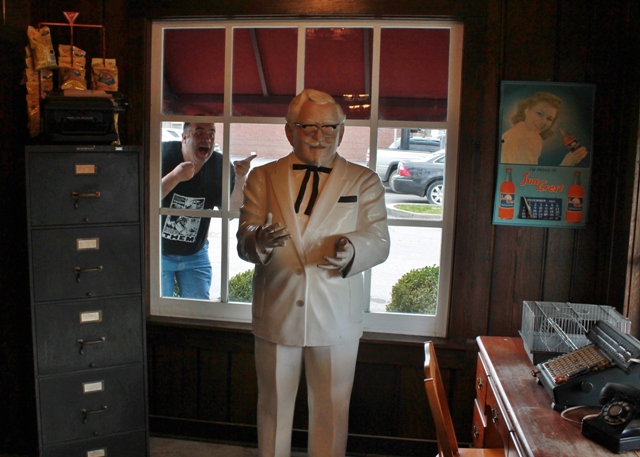 We arrived in Louisville that night and stayed at a Hyatt which (despite being cheap on hotels.com) was REALLY nice! We had our own living room, kitchenette, and desk that was separate from the sleeping area. David crashed while I stayed up to edit the day’s pictures on my laptop. Around midnight I starting hearing rustling sounds and thought it might be him tossing and turning from either a seizure or one hell of a bad dream. I raced over using the light from my cell phone as illumination only to find him lying still. The sounds became louder and I suddenly realized they were coming from the window. I looked outside and saw that Louisville was getting pummeled by a major thunderstorm! This one ended up being a doozy; wreaking havoc on the city due to flooding from the Ohio River which would end up killing one woman while leaving 160 others in need of rescuing (and David slept through the whole damn thing). Adding to the dilemma was a fire that broke out at a Louisville GE plant that was so intense it would send ash flying over the Louisville Zoo, causing it close the next day. What were the chances that this would happen the day we were scheduled to visit?

Not to be deterred, David and I would end up having a great day anyway; having lunch with the writer of Dark Night of the Scarecrow, J.D. Feigelson while touring his wonderful new house and his amazing collection of radio microphones and vintage Halloween decorations! 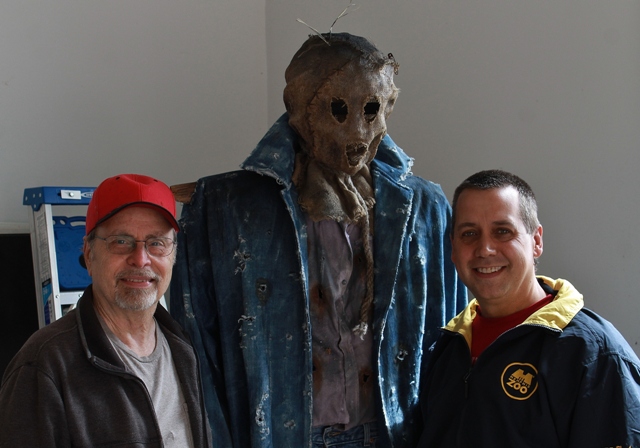 Earlier that day we’d made a surprise discovery while searching for a giant Louisville bat.

No…not that huge “slugger” baseball one they’ve got downtown. I’m talking about a giant Vampire Bat!

2 thoughts on “In the Grip of KING KONG & the Tourist Traps of Tennessee!”