One of the things we were most looking forward to on our 2015 road trip was getting the opportunity to partake in an actual ghost hunt! Ghost hunting has become a popular form of entertainment with such TV shows as Paranormal State, Most Haunted, and Ghost Hunters intriguing the public with their weekly stories of spectral encounters. If there’s one thing these shows teach us, it’s that the best locales for stalking spirits are those rich in history and lore. In that regard, the Civil War torn city of Chattanooga, Tennessee could very well be a paranormal smorgasbord and one we Terror Daves couldn’t pass up.

Seriously, am I the only one who knows how to act like he’s seen a ghost?

Prior to the trip I’d contacted Amy Pettula, President and founder of Chattanooga Ghost Tours, inquiring what our chances were of getting a tour this time of year. Amy co-authored the book Haunted Chattanooga and I was very pleased to find her receptive to the idea. My only experience of having a ghost tour was just this past fall with Ursula Bielski and her eye-opening look at Chicago’s Lincoln Park Zoo (story HERE) which I thoroughly enjoyed (except for the unexpected ending I explained in that post).

Though receptive to working with us, Pettula did, however, have reservations about our coverage possibly giving away too many spoilers for potential customers and asked if we wouldn’t mind foregoing the traditional tour in favor of participating in one of their ghost hunts instead. She explained that since no two hunts are alike, there was no danger of ruining the experience for someone else and it was “less about the stories and more about the experience.”

Would we mind?  On the contrary we couldn’t believe our luck!  Not only would we be participating in our very first ghost hunt, but with access to the same professional equipment utilized on TV!

It was over 70 degrees with a light breeze (a.k.a. perfect outdoor ghost hunting weather) when we arrived that evening at the University of Tennessee in Chattanooga‘s concrete double staircase. Amy was there to greet us before introducing us to our guide; a friendly guy named John Holloway whom we shared cryptozoology stories with before the other participants arrived. I’d taken a college “creative story-telling” course years ago and would later discover that John was a true master. He said that his wife, Hope, is also a guide with the company and I suddenly had fantasies that they were my next door neighbors who’d routinely invite me over for cook-outs. We’d all sit around the grill drinking beer as they’d take turns scaring the crap out of me with their ghostly tales. On this night, John was not only engaging but also deft at volleying the incessant interruptions by one of our fellow hunters. I’m not sure if the guy was inebriated or just plain annoying but I give our guide extra credit for not adding him to the list Chattanooga’s restless spirits by the time this night was over.

As soon as were all accounted for we walked around the building to a chapel attached to the University. John recounted a story around it which I won’t share but was pretty creepy. Let’s just say if you’ve ever contemplated suicide you may want to think twice about it; lest risk the possibility of spending your afterlife repeating the deed. This was also the spot where John began passing out the ghost hunting equipment. I was given something designed to detect temperature changes which I was supposed to co-ordinate with another member who’d been given a similar device. The big difference between the two was that his was designed to measure ground temps while mine did the surrounding air. Any discrepancies between the two, greater than a few degrees, could tip off paranormal activity. David was handed an EMF (Electromagnetic Field) detector which, if  it’s readings should “spike,” might also be indicative of a supernatural presence. I should note that everyone was given a chance to use ALL the equipment at some point during the hunt and the best was yet to come. 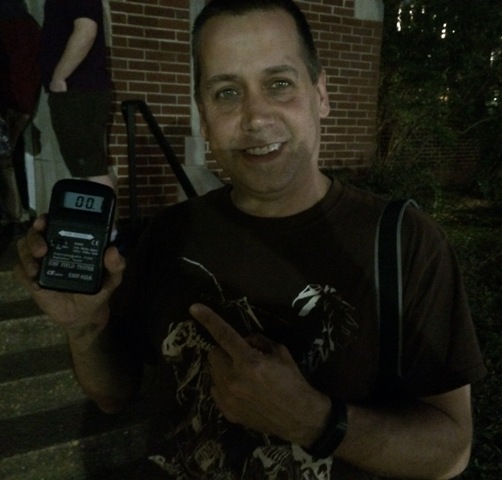 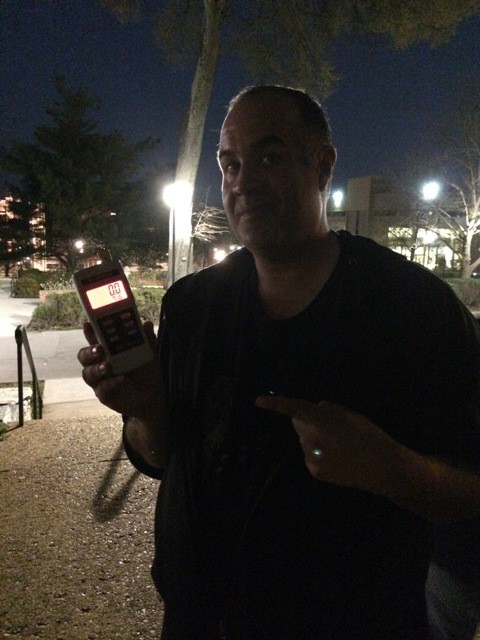 We were given some history regarding the area we were standing on which included an underground city and secret passageways used by an old hospital (and that’s all the info you’ll get from me on those subjects, sign  up for a tour or buy Amy’s book for more details) before reaching an old cemetery. It wasn’t until after reaching this site that the temperature readings between my gadget and the one the other guy was using started abruptly going their separate ways. This was particularly the case by one of the headstones. The reading on my device read 72 degrees while his had dropped to the low ‘60s.  When we reported our findings to John (who was on the other side of the cemetery) he stated that it had been a hot spot (or, in this case, a “cold” one) before with past hunters. We believed him because we’d done the temp co-ordination by several headstones and he knew exactly which one we were talking about before we even told him.

We all assembled by a lone marker that was cut off from the other graves and close to an old tree. Most of the cemetery’s occupants had lived affluent lives and it was suggested that this individual (possibly Native American) may have been close enough to a wealthy family to be given proper burial so long as it wasn’t too close in proximity to the other occupants. Whatever the circumstances, John told us that this was also the site of lots of activity and introduced us to one of the creepiest and coolest devices of our hunt. It was called a “talking Ovilus” and I later learned that Chattanooga Ghost Tours was the first to offer their guests the opportunity to use one.

Some refer to it as a “modern day Quija board” and believe the device can make audible communications from the dead. The Ovilus translates environmental readings/EMF  into audible words. Most of the words we heard seemed like random gibberish until later on when we distinctly heard it say, “Kill the a**hole!” With that, the handful of us who heard it immediately turned in unison and looked at that annoying guy I mentioned earlier before busting out laughing. Apparently some restless spirit out there sure knew what they were talking about.

My favorite was the SLS Ghost Mapping Visualization System. With this handy (and might I add, pricey) tool you can actually SEE ghostly activity as it’s built in camera and computer gives form to the ethereal. Most ghost hunters agree it is far more effective than a simple thermal camera. When you hold the device, objects and people in view show almost as stick people and, should an anomaly appear, it alerts the hunter by pinpointing the subject and highlighting it in red. I was given my turn towards the end of the hunt and thought it was really neat. The only anomaly I detected during my use was an old cross gravestone which was likely nothing substantive but there was some comfort in knowing that if anything supernatural was lurking nearby I’d at least be able to see it!

The time flew by and the tour ended with us walking back towards our cars while John continued to share some fun stories of local lore. We thanked him for an entertaining evening before heading back to our hotel. All the photos taken that evening were via David’s iphone and he went through them all before going to bed. I was just about to crash for the night when he turned his laptop towards me and said, “I think I found something.” It was a shot he’d taken of me with some strange “mist” appearing on my right side. My eyes grew the size of saucers. Had I been walking arm-in-arm with a Civil War spirit all night long? And worse, was it still with me???

David started laughing. In fact, in the five years I’ve known him and as funny a guy as I’d like to think I am, I’ve never seen him laugh as hard as he did that night.

I, on the other hand, was anything BUT amused. After a busy day visiting Zoo Atlanta, Terminus, Rock City, Ruby Falls, and doing a ghost hunt, I was now looking at a sleepless night! What if the damned thing had followed me here!? David posted the picture on the Chattanooga Ghost Tours Facebook page (which you can “like” HERE) and, fortunately, my friend Mitchell from Brookfield Zoo (also a fan of cryptozoology and the weird, I might add) was quick to point out that it was merely an insect that was flying by when the picture was taken. What a relief!

This is not to say that guests of Chattanooga Ghost Tours don’t occasionally hit spectral pay dirt.  A few weeks after our visit five different people on as many tours managed to snag the same spirit which Amy was kind enough to let me share with you. 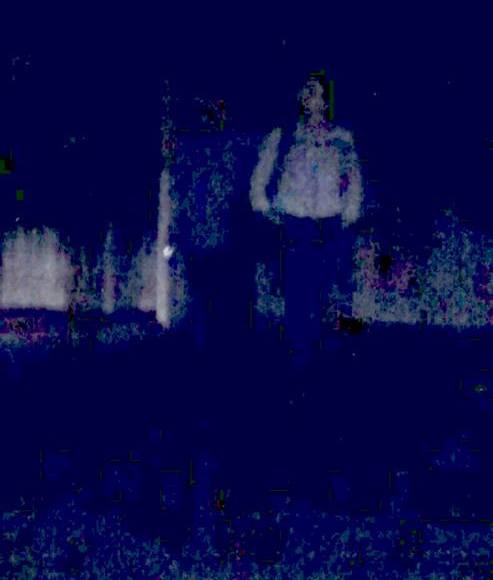 Judging by the attire, this spirit was a lot more recent than the Civil War days. Amy speculated that it may have been a homeless person who passed away the previous fall. I wondered if he wasn’t wearing a knapsack and perhaps a runaway passing through that met with bad luck but, either way, five people catching the same unexplained image is pretty persuasive.

If you’re in the area, we Daves can’t recommend Chattanooga Ghost Tours enough! The experience was not only informative and entertaining but a neat opportunity to handle the same devices & equipment seen on all those popular ghost hunting shows we enjoy. The prices are affordable, the crew is top notch, and it is a guaranteed night you’ll never forget!

Chattanooga proved one interesting city (with yet another city beneath, apparently) and I was really glad that of all of our destinations, we decided to stay here the longest. Even some of the locals were rather colorful as we’d discover the next day when we’d see the most unusual house either of us had ever seen before…

One thought on “Hunting Ghosts with Chattanooga Ghost Tours!”