My ten year old son, Luke, and I arrived today for G-FEST XXI . In the ten years I’ve attended the Godzilla Festival, I’d never seen the registration line so long on a Friday. Last year I attended over ten conventions, most outside of my sweet home Chicago with poor G-FEST getting a quick stop-over on its final day. This year would be the opposite as I vowed to avoid virtually every other event and focus solely on one of my favorites.

After grabbing my pass I was reminded of one of the many reasons why this event stands out among the rest; G-FEST gives you an actual “program.” At no extra charge you get a nice little booklet that not only outlines where everything is but also what is happening where along with descriptions of everything in the back. This schedule is also available online and is a great way for fans to plan their weekend. If that’s not enough, J.D. Lees (the man behind G-FAN and G-FEST) offers an orientation while answering questions new attendees might have to optimize their experience. 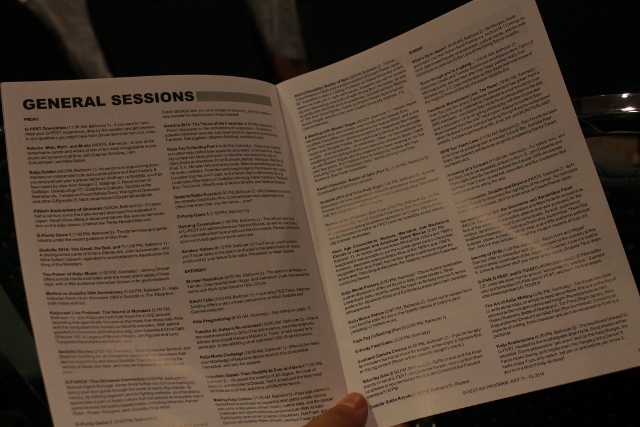 I can’t think of any other events that go to such lengths to see to it that their guests are kept in the loop! This is especially important at G-FEST which offers a LOT of diverse activities that cater to all fan interests and demographics. Keep in mind while you’re reading of my experience that there are many other fans who could recount the same night at the same convention while offering a completely different story. One thing they would all have in common is having an amazing experience.

Luke headed to the video game room while I decided to check out some panel discussions that caught my eye. After attending J.D.’s aforementioned orientation, I headed over to one of the ballrooms to attend Kevin Horn’s thread on the 50th anniversary of King Ghidorah. Of all the Japanese giant monsters, King Ghidorah is my second favorite, right behind Godzilla (sorry Gamera).

Kevin first shared some amazing vintage behind the scenes footage of TOHO crew members creating the miniature buildings (one roof shingle at a time) as well as putting together the immense costume of Ghidorah (one scale at a time). I believe this footage is available as blu-ray extras but was really neat to see among fellow fans while also showing just how much work went into those films.

Not the best view but great footage none the less!

It was speculated that the multiple heads of Ghidrah (controlled by wires) may have been inspired from the Hydra featured in Jason and the Argonauts which debuted the previous year. Fans speculated as to whether Godzilla’s famous adversary would appear in the next installment. Kevin said he wished that the end of Godzilla 2014 had the camera follow the King of Monsters into the sea before panning up to an asteroid crashing to Earth. “I think the credits should have started scrolling with the familiar sounds of the original Ghidrah letting fans know he was on his way,” said Horn.

And speaking of which, the next discussion I attended was one I was most interested in – what do the hardcore Godzilla fans think about the new 2014 movie? That one didn’t disappoint and created quite a response from the crowd, So much so, I’ve decided o give it it own blog in the near future.

After that I was back for another anniversary panel hosted by Kevin Horn, this time on Mothra vs Godzilla. It’s interesting to note that 1964 was the one year TOHO ambitiously released two Godzilla films, this one along with Ghidrah the Three-Headed Monster. One couple attending this panel really went all out… 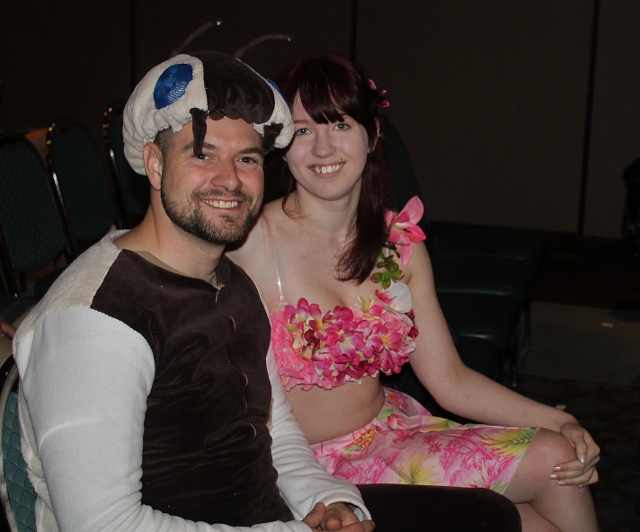 By the time it ended, we were ready to check into our room at The Crowne Plaza Rosemont. Making this experience easier while washing away the steep daily parking fees was my friend, Don Johnston, who claimed this was his way of “taking care of friends of Mr. Goolie” (by that he means horror host, “Svengoolie,” of course). The extra money would sure come in handy as Luke and I anxiously made our way to the dealer room a.k.a. a kaiju fan’s version of Willy Wonka’s chocolate factory! 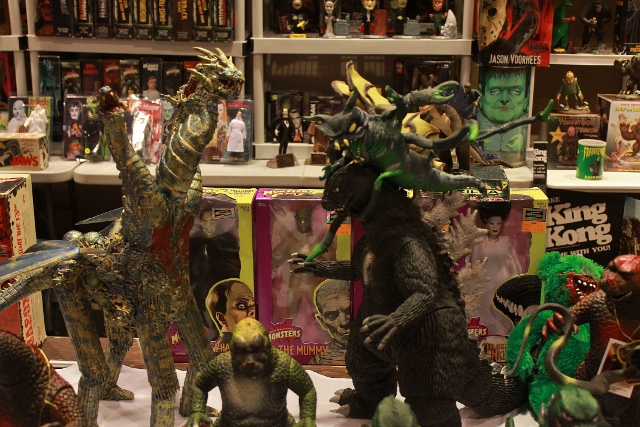 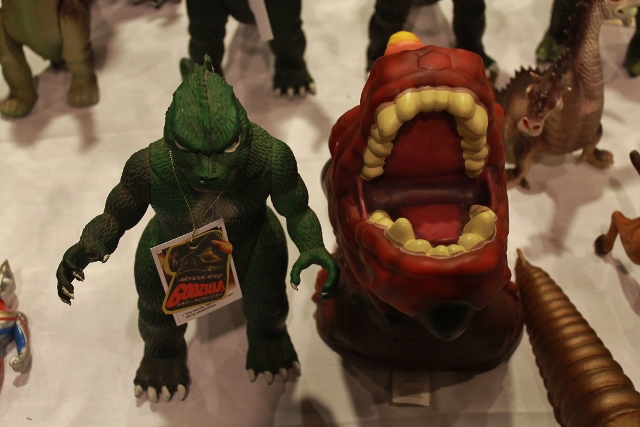 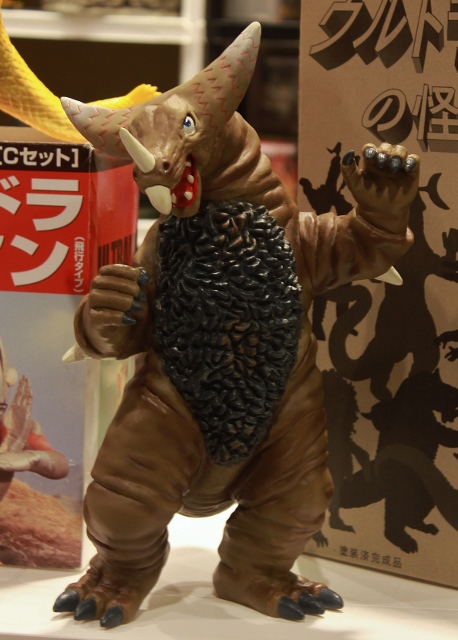 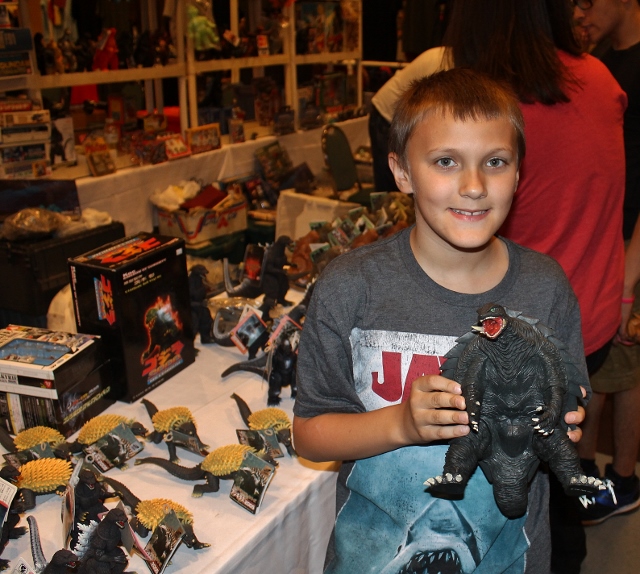 It was here that I managed to make my son’s day by finding a large size Godzilla 2014 figure at a discount price. The box was damaged making it unworthy of collecting but, so far as Luke was concerned, it only made getting to his prize that much easier! 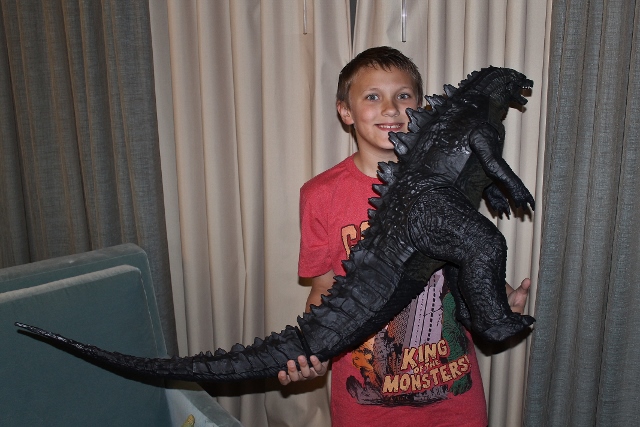 I’m thinking the new acquisition may have had something to with him asking that we not attend the opening ceremonies nor go swimming (which he loves to do) so he could get back up to our room and start playing with his new toy. It’s also probably what later prompted him to give me a big hug while proclaiming this was “the best G-FEST ever!” He ought to know, he’s attended every one since he was a year old.

I watched Reptilicus on the house channel (another great G-FEST feature – a 24 hour hotel channel dedicated to monster movies and various other rare goodies) while he blasted imaginary MUTO’s. All in all, it was a busy first day…