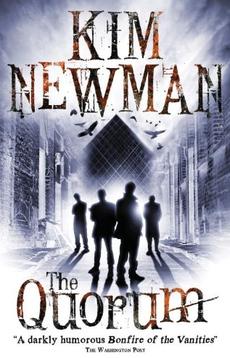 It’s a tough thing, trying to find a new angle on a horror story. How many different spins could there actually be on the same monster? All the TV shows, movies, and books about vampires, werewolves, and zombies are blending together into an amalgam of brooding bad boys and naughty girls that is getting quite tiresome.

There is one classic horror story that has not been so overdone – the Faustian deal with the Devil story. Most stories that do center around the trope focus on the person making the deal, living a stupendous life, then getting his comeuppance – or getting out of it, depending on the hero – and the devil reaps his reward.

Kim Newman, author of the Anno Dracula series of books (review of Anno Dracula  – Johnny Alucard is forthcoming!), has come up with a novel twist on the Faust story. What if, when you made your deal with the devil, you had to make some else’s life absolute hell?

In The Quorum, childhood friends Mark Amphlett, Michael Dixon, and Mickey Yeo made a deal with Derek Leech when they are graduating high school. They happen upon him when they get lost on their way to a party, having misplaced their friend Neil Martin along the way.  In exchange for fame and fortune, every year they have to do everything in their power to make Neil’s life a mess. They keep him from getting good jobs; they hook him up with a crazy girlfriend; they even organize regular physical attacks. All his misery fuels their success. Each year one of the three friends coordinates those efforts.

This year, Mark is in charge of Neil’s misfortunes. To keep track of their progress, they hire private investigator Sally Rhodes. She’s supposed to simply monitor Neil and report back everything she sees. Neil seems resigned to his lot. Sally is unaware of the deal the Quorum had made, so she sees Neil’s fate as a problem, and begins to intervene.

I really liked this spin on the Faust tale. I was fascinated by the idea that the recipients of a deal have to do their own dirty work to gain the reward.  The true protagonist in the story, and really the only character you can root for in the whole book, is Sally Rhodes. She is the single-mom of “The Invader”, as she calls her son, and she drives the story forward. I would love a novel that’s focused only on her.

In addition to the the novel (originally published in 1994) several short stories were published in this edition of the book. They help to flesh out some of the story, including Derek Leech’s origin.

This book was an interesting but difficult read. The book is set in London and other surrounding areas. Unlike some books published in the USA that originate in the UK, this book was not “Americanized” in any way. Luckily I watch a lot of British TV and read British books, so I was able to keep up with most of it. If you are not familiar with British language, it would be handy to have a British-American glossary handy!

Another difficulty with the book is that because the Quorum is heavily involved in media as part of their fame (TV, music, and comics), there is a lot of fake pop culture permeating the story. For example, Mickey Yeo is a comic book artist, and a lot of his story revolves around a comic hero that he retired against fans’ wishes.

A complication in the structure of the book is the frequent use of flashback chapters. My summary above is in chronological order, not story order. It reminds me of a line from a 1988 Chevy Chase film called “Funny Farm”. Chevy Chase plays an aspiring writer and his wife is reading his first draft, and she says in the first chapter he has flash-forwards, flash-backwards, and flash-sideways. This is definitely not a book you can casually read in front of the TV.

If you can handle a novel with a complex structure and extremely British setting, I think this book is worth a read. Once I got into it I was compelled to see how it ended. It’s a different spin on a classic story, and that is always refreshing.

You can order the book here.

Disclaimer: This book was a free review copy, and we were not paid to review this book.