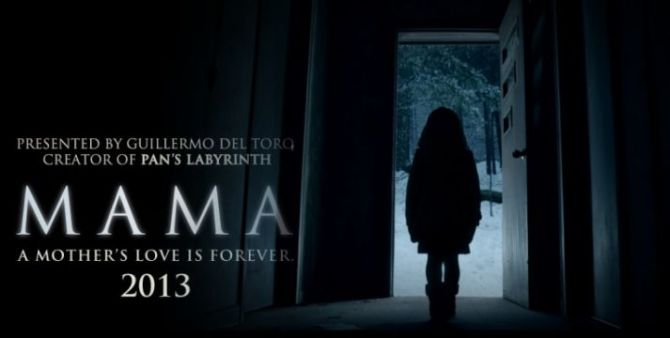 The latest big screen horror import to hit the theaters, gives a dark spin on motherhood in the supernatural thriller  MAMA.  I’d seen the previews and thought they had a definite “creep” factor and was hopeful this might add shivers to my already unbearable Chicago chills. Was it worth dragging myself out into the cold?

The story begins with a man who murders his wife before escaping with his two young daughters. They end up in a crash and find refuge in an isolated, old shack located in the woods. Not knowing what else to do, the father decides to kills off his girls before being stopped by a “presence” that had been residing in the dilapidated domicile all along.  Fast forward five years and the girls are finally rescued; though not before being transformed from cherubic angels to feral, crab-walking wrecks! 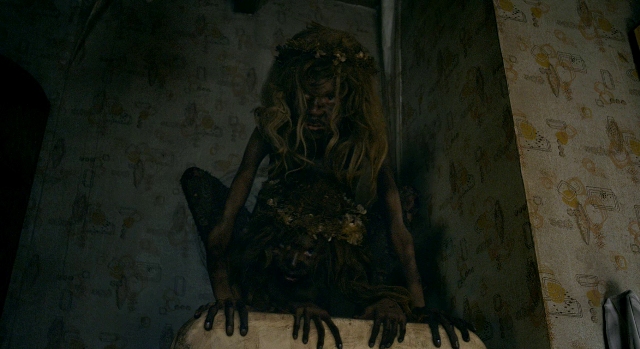 Not the highest candidates for adoption…

Despite their absence from civilization, their father’s identical twin brother, Lucas, never gave up hope and seeks to adopt them. There’s only one problem…he’s a starving artist and his girlfriend, Annabel, is a Joan Jett wannabe with her own “Runaways” inspired band; not exactly something DCFS clamors for in regards to adoption material.  Helping to stack the cards in their favor, a psychiatrist takes special interest in the case and offers them a deluxe dream house in exchange for having access to the girls as his patients. Annabel is none too interested in becoming a parent (especially to ones with some rather special needs) but goes along for the ride in an effort to keep her man happy. 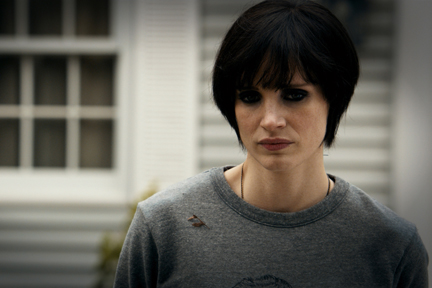 Actually, for being animalized, these girls adjust rather quickly and seemed to act better than many kids I’ve seen raised in society. I mean, yeah, it’s odd that they’re so withdrawn and that the youngest enjoys a steady diet of cherries and insects, but how bad is that? It turns out to be REALLY bad as that supernatural element I mentioned earlier is more than just a disgruntled ghost but turns out to be the spirit of a mentally ill woman who lost her baby in life and now fashions herself the adopted mother of the girls. And whomever gets the girls…gets “Mama!”

“Mama” ain’t the sharing type either and is sure to hurt anyone who shows any genuine love for the girls (which fortunately for Annabel, keeps her relatively safe).  “She gets jealous,” the girls explain, sometime after their Uncle Lucas gets sent down the staircase in one of the most painful looking falls I’ve seen since THE EXORCIST.  While he recoups, poor Annabel now finds herself something of a single mom to two girls she can’t hardly stand along with their contortionist ghost. And let me say, this is one ugly-ass spirit which is explained later due to some ghosts being particularly jacked-up looking because their bodies had been exposed to the elements (???).

I LOVE my Honor Student!

Somehow the Dr. knows everything that’s going on including the ghost’s history courtesy of a mental health filing system that looks a lot like “The X-Files.” In fact, I was utterly amazed how easy it seemed to be for everyone in this movie to know exactly what was going and what they should do about it. I will say there were some eerie scenes as well as some genuinely heart-tugging moments you don’t usually experience in these type of films. Like the film THE POSSESSION (which I reviewed last September HERE) this one also features moths as conduits for supernatural activity. As for the ghost herself, she spider-walks a fine line between scary and Tim Burton silly with the latter winning out by the end. An ending,  I might add, I thought was utterly ridiculous!

“Was that really the ending!?”

All in all this Spanish/Canadian film is more entertaining than a lot of its American cousins but ultimately fails to deliver. Perhaps if there is one lesson we can all garner from this film its that parents can be pretty screwed up…both in this world and the next!