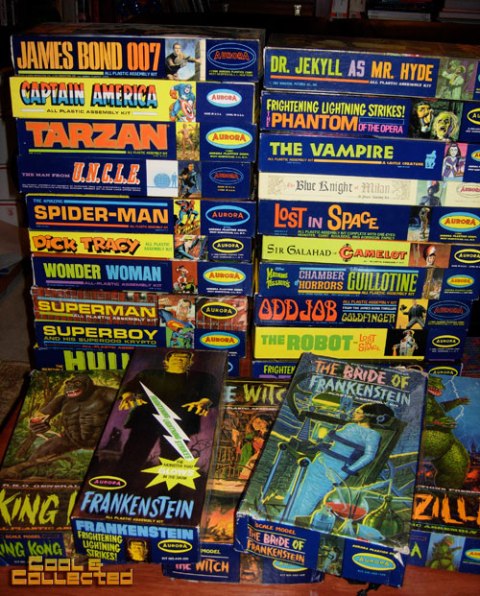 Growing up I wasn’t actually a monster fan until I was in my early teens. I will always remember though around when I was 7 I received an Aurora Dracula model kit (and my brother got the Frankenstein kit). These kits had the glow in the dark feature and there were times I would lay in bed at night watching them glow, wondering if they would attack me when I fell asleep. Thankfully they did not and these kits may have actually have been what lead me to my love of all things monsters.

Though I no longer own these kits (and refuse to pay the huge asking prices for the original kits) it is nice to see that there have been cheaper re-releases these past few years. In addition, there is also an amazing documentary available called “The Aurora Monsters: The Model Craze That Gripped The World!” This Rondo-winning documentary has been lovingly put together by Cortlandt Hull, who owns The Witch’s Dungeon monster attraction in Connecticutt. I must say that this DVD is a lot of fun to watch and features interviews with James Bama (Aurora cover artist), Ray Meyers (Aurora kit sculpter) and Andrew P. Yanchus (Aurora R&D project manager). Being a horror host fan made me enjoy this documentary even more because it is hosted by the one and only Cool Ghoul, Zacherley!

“The Aurora Monsters – The Model Craze That Gripped The World!” documentary came about due to a childhood fascination I had with not only the kits but the remarkable cover art by JAMES BAMA.  Both combined were what inspired me to create “The Witch’s Dungeon” – the lighting & backgrounds of the Bama art, I tried to achieve that in life size figures & settings. When approaching this project, I knew an interview with Mr. Bama was essential, luckily through a mutual friend, artist Roger Kastel, it became a reality. However, a trip to James Bama’s studio in Wyoming, was the only way to film this legendary artist. He was truly amazed at the lasting interest in his Aurora covers, and the inspiration his work gave to other artists.
*
Aurora project manager, ANDREW YANCHUS, was an integral part in putting this documentarytogether. Andy’s knowledge and amazing archive of photos, sketches and models never produced, revealed the untold story of Aurora. Model sculptor for many of the Aurora kits, RAY MEYERS gave insights into how these figures were created, and displayed the special tools he used to carve them.
*
Since it was necessary to convey the fun and excitement of the 1960’s “Monster Craze” era, who better to host it than legendary Horror Host, “ZACHERLEY THE COOL GHOUL”? John Zacherle has been supportive of “The Witch’s Dungeon” since the 1970’s. He gave a wonderful energetic performance, and a thrill for me to make him up as his classic character.  Zach had such fun with the elaborate castle sets at Bill Diamond Productions, and interacting with Bill’s character, “GORGO THE GARGOYLE”.  Bill Diamond who had worked with Jim Henson & “The Muppets” is a longtime fan of Zach, and classic horror.  Although Zach never had a co-host before, he and “Gorgo” became a great team and revived the fun of the era for us “Monster Kids”.
*
The story did not end with Aurora, but what other artists brought to fans in more recent years, such as DANIEL HORNE, JEFF YAHGER, the artists of SIDESHOW COLLECTIBLES and MAD GEPETTO, plus reissues of Aurora by MOEBIUS MODELS, POLAR LIGHTS, with actor & collector, DANIEL ROEBUCK, plus much more.
*
It was fun and a dream come true to make this project a reality, it also won the RONDO AWARD in 2010 for Best Independent Film.  “The Witch’s Dungeon” is currently working on the sequel – “THE AURORA MONSTERS AND BEYOND!” as part of our “Legends Of Film & Fantasy” series,  which will be produced at Bill Diamond Productions.
*
*
If you would like to order your copy, and I HIGHLY recommend that you do you can either go to The Witch’s Dungeon website by clicking HERE or e-mail Cortlandt Hull direct at witchsdungeon@sbcglobal.net. This DVD is a labor of love and this Dave absolutely LOVED watching it. You will too and it makes a great gift!
*
~David Albaugh

3 thoughts on “The Aurora Monster Model Kits: Gone But Certainly Not Forgotten!”