This was actually my second visit to the Flashback Weekend convention, and, in many ways, it was a “flashback” to my experience the previous year; however, it was even more fun the second time around!

I arrived at the convention just after it opened on Saturday morning.  As soon as I was in, I found out where Svengoolie would be signing later that day, and started browsing the vendor room.

As I perused the many diverse and unique tables, I saw a face that is likely familiar to anyone who’s attended a convention in the Chicagoland area…

“Body of a killer.  Mind of a puppy.”  It’s the always-fun Kitty Zombie!

In fact, if you’re ever at a Chicago-area convention and you don’t see Kitty Zombie, you might not be looking hard enough!

At any rate, I still ended up getting in line to see Svengoolie about an hour and a half early.  Shortly after, two women and a young girl stopped by to take a breather and, upon learning that they were right next to the room in which Svengoolie would be appearing, decided to stay.  The line soon began to grow behind us, to the point where I’m sure the people who arrived “on time” to meet Sven made a mental note to heed Mr. Goolie’s warning and get there early at his next appearance!

While talking to some of the other patient Sven fans, I discovered that I had actually met one man in line before… at last year’s Flashback Weekend, while we were both waiting in line to meet Svengoolie!  I also spoke with a woman who had come to the convention all the way from Texas!  She was visiting family, and she and her brother decided to stop by the convention when they found out Sven would be there.

Eventually, it was time for the signing to begin!  Jim Roche (the Director of On-Air Operations at Weigel Broadcasting) poked his head out of the doors, saw the crowd, and came out to give us the rundown:

“Ladies and gentlemen, we ask that you keep your hands, arms, and legs inside the car at all times.”

The more alert people in line caught the joke and laughed, and Jim led us into the room where we lined up along the wall and found that Svengoolie was already waiting for the line of eager fans!

Of course, meeting Svengoolie is always a pleasure!

Good thing Sven was situated in a large signing room––– we needed the space! 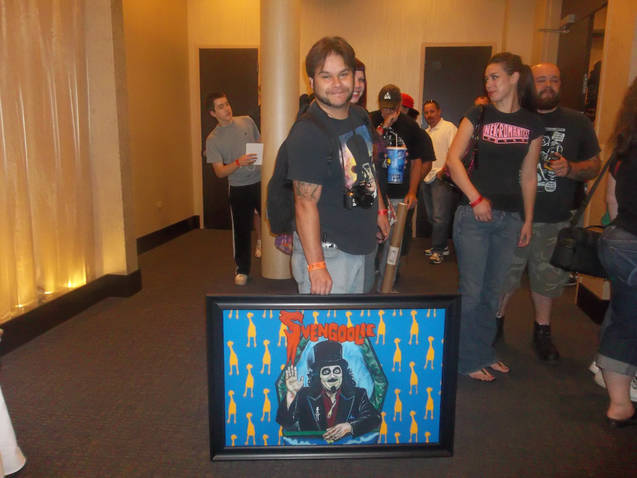 Alan Jacobs brought a wonderful painting he created of Svengoolie!

And the line outside grows…

By the way, many people have asked me this, so, for those of you who were wondering… 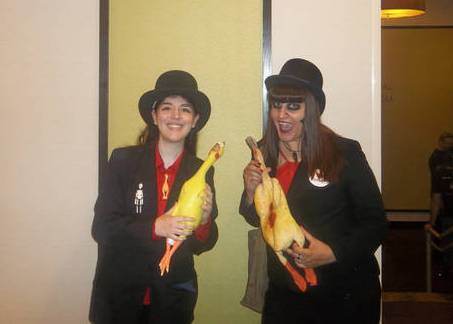 Frankly, I’m surprised it took me this long to run into her at a Svengoolie appearance…

After the signing, it was time for the costume contest, with Svengoolie serving as the emcee!  As in past costume contests, the winner would ultimately be determined by the audience’s cheers.

First up was the (rather small) “Kids Under Twelve” category: 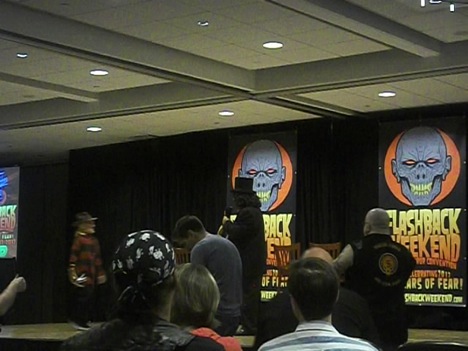 I guess growing up on Elm Street leaves a lasting impression…

“Regan” even spit out some green liquid while on stage!

And the prize went to… Freddy Krueger!

Next, of course, was the adult contest; and the contestants were:

A trio known as the “Defcon Clowns”! 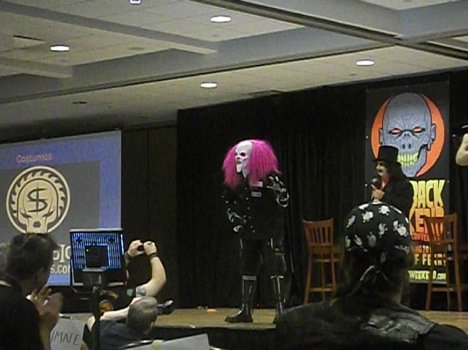 Another clown; this one named, “Tweaker”!

Captain Spaulding––– who had some very colorful language to share…

Alex Large… nobody let him out of those restraints!

Ash (who seems to appear at many Midwest conventions…)!

Michael Myers (to whom Svengoolie commented, “I loved you in Goldmember!”)!

The extremely hyperactive Curtis (and his puppet pal, Charlie)!

A “housewife zombie” who, Sven noticed, is ready to “give a helping hand”! 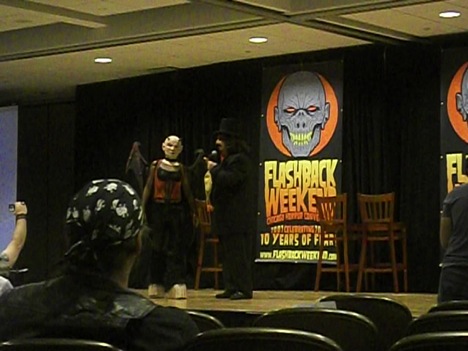 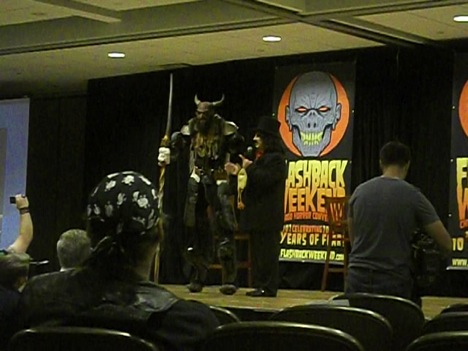 And the god of chaos (no, not Get Smart’s “KAOS”) and destruction!

After each individual contestant had his or her moment in the spotlight onstage, they all lined up once more in front of the stage for the final vote!  After the audience cast their votes by cheering, the judges conversed, and revealed the winners:

In third place… the demon!  In second place… Curtis (and Charlie)!

And the winner was… the god of chaos and destruction!

Afterwards, Svengoolie congratulated the three winners as they all posed for the many cameras snapping pictures!

Svengoolie and the audience’s picks pose for a photo-op!

Flashback Weekend was just as fun this year as it was last year, and it’s always wonderful to catch up with Svengoolie at an appearance!  Looking back on Flashback, it was a nice reminder that Halloween (as well as, of course, Svengoolie’s Halloween public appearance tour) is right around the corner!

2 thoughts on “A “Flashback” All Over Again: Svengoolie At Flashback Weekend! by Jamie Lee Cortese”