There’s always a special place in my heart for the big ROCK N SHOCK horror convention that takes place each fall in Worcester, Massachusetts. Back in July 2010, when David Albaugh and I created this site, there had never been any plans for us to formally meet (that story covered HERE). ROCK N SHOCK provided the opportunity and venue for this to not only take place but to also solidify our friendship – turning online pals into best friends.  By the time the weekend was over, there was never any question that I would return.

New England seems perfectly fitted for the Halloween season and ROCK N SHOCK makes it even more so. As my plane began its decent into the Providence Airport, I looked out my window eager to see Rhode Island’s colorful foliage.  Unfortunately, Hurricane Irene provided uneven distribution of moisture and patches of bright orange, yellow, and red were dispersed amongst spots of just plane dead looking. It was bad for photography purposes but not altogether unfitting for the macabre season at hand. After a couple days of sight-seeing, we drove out together to the DCU Convention Center.

We stood in line awaiting our turn to pick up our passes before finding our way into the gigantic main hall. I’ve said before that Friday nights are usually good nights to attend these sort of things as Saturdays tend to generate the biggest crowds. This event, however, was hopping from the GET_GO! This was perhaps due to it not only it being New England’s main horror attraction (unlike my home in the Midwest that sees many) but the overall fan approval of its two main headliners; Ace Frehely (Rock) and Robert Englund (Shock). There were different vendors this time around and I noticed that the best items for sale were not the commercially packaged ones but rather the homespun variety.

Vicious teddy bears, adorable werepuppies, zombie gnomes, customized bloody STAR WARS figures, as well as Barbie dolls getting the slasher treatment were all featured at ROCK N SHOCK. Many of these artists will be given their own individual spotlights on this site so stay posted. One thing is for sure – this convention had one of the most unique items I’ve seen for sale at any horror event!

This adorable werepuppy and its talented creator will be featured here SOON!

Horror conventions are nothing without their enthusiastic fans and we enjoyed seeing some of the homemade costumes that were parading around us. Many were wearing clown faces in honor of one of ROCK N SHOCK’s featured bands – INSANE CLOWN POSSE. I always am so grateful for these people because they make standing in line and “people watching” so much more enjoyable! 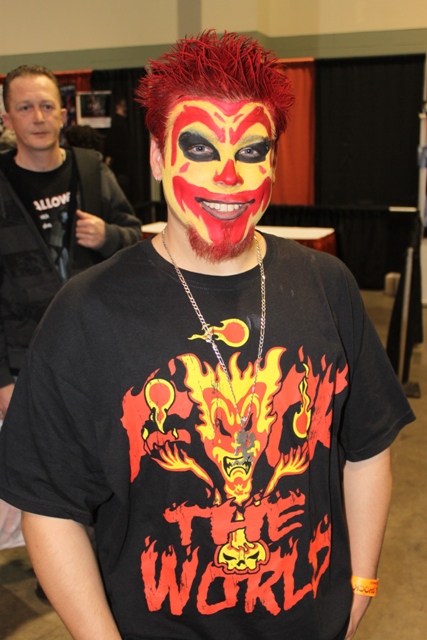 And then of course were the celebrities! As mentioned, ROCK N SHOCK boasted some heavy hitters like Englund and Frehley, as well as Lance Henriksen, Mark Patton, Roddy Piper, Gary Busey, and a host of others. Many of these encounters will also get individualized posts and they range from fun to downright CRAZY! Like when I mentioned “Celebrity Apprentice” to Busey and he looked like he was going to kill me!

Dave Fuentes and DAY OF THE DEAD’s “Bub” – Howard Sherman 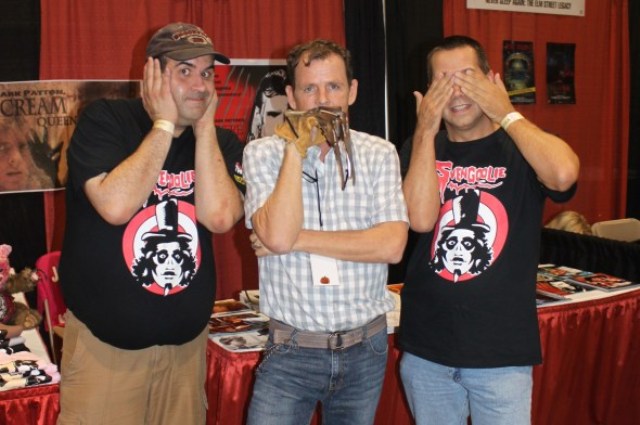 The Daves and NIGHTMARE ON ELM STREET 2’s – Mark Patton!

No true horror convention would be complete without its patron horror host and this one brought the 2010 Rhondo Award winning hostess herself – Penny Dreadful! We really enjoyed hanging out with her and the gang from SHILLING SHOCKERS and this is yet another item to be covered with more depth soon!

The Daves and Penny Dreadful make boo-tiful music together!

All in all it was a highly entertaining weekend with a legion of happy and satisfied fans to show for it! The days flew by and we couldn’t believe all the stories and pictures we walked away with. But don”t take my word for it, dear reader, stick around and see for yourselves….