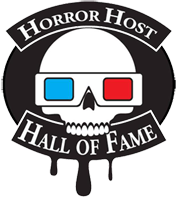 This year’s Indianapolis HorrorHound Weekend was noteworthy for featuring multiple events centered around the art of horror hosting. Perhaps the most significant of these was the addition of horror hosts to an actual “Hall of Fame” sponsored by “Ripley’s Believe It or Not.” 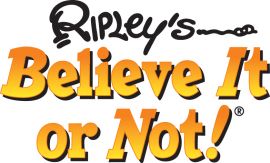 HorrorHound events organizer, Jason Hignite, oversaw this ceremony and his devotion to horror hosts can not be overstated. Any horror host able to look outside their own personal interests can  not deny that his making one of the country’s largest horror conventions a venue for them to not only feel welcome, but also an opportunity to share their work with a larger audience, has helped rejuvenate this nearly extinct art. It has also encouraged younger fans to appreciate the work of commercial hosts from a bygone era, as well as introduce those of us who did grow up with a host to become acquainted with some of the other personalities our fellow fans were watching across the country. Perhaps none of the host-related events at HorrorHound best illustrated this than the Hall of Fame Inductions.

Mr. Hignite also works with a sister website of HorrorHound called G.O.T.H.I.C. (Gathering of Television Horror Hosts – Internet – Cinema).  Though no official plaque design has been created for the awards, G.O.T.H.I.C. will be holding a contest for this express purpose and we’ll definitely keep you posted on how to get involved with that. Once created, the awards will see their way to their proud owners while those who have passed away will have their awards housed at Ripley’s. 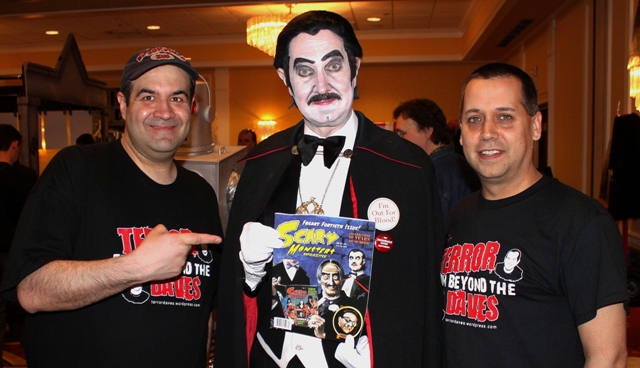 The first host inducted was, appropriately enough, the very first horror host. Ms Monster had the honor of inducting Vampira whom she described as “The first mythological creature of the Atomic Age.”  Maila Nurmi’s Vampira began hosting in 1954 and, last year, was the subject of her own HorrorHound Tribute (covered in greater detail HERE). A few years later, hosts would be popping up across the country! This was due to the “Shock” movie package – a collection of over 50 classic monster movies given to 142 media markets across the country.

The addition of a horror host was something that could benefit the station on two major points; for one thing, nervous TV execs weren’t sure how these movies would play to a general audience (this was the 50’s/60’s after all). Not wanting to literally scare their viewers away, a comical host might help alleviate anxiety a bit by providing some cheesy laughs. Hosts could also serve to help fill up some time on movies that ran shorter than their program slots provided.

Bela – Not ready for Prime Time?

As a result, the late 50’s/early 60’s saw some memorable, classic horror hosts enter American popular culture. These men and women were professional broadcasters who, by exercising their versatility, afforded them a bit of job security along with a relatively cheap method for promoting these old films.

Cinema Insomnia’s Mr. Lobo (who had the privilege of inducting Count Gore de Vol) also pointed out that the “Shock” package of films weren’t alone in creating a legion of hosts.  “The Creature Feature” package brought about some of the most legendary names (such as Bob Wilkins in California) as well as happy monster memories for young fans like myself  across the country who saw these films both with, and without, a host.

Both Daves grew up with their own Creature Features back in the 70’s!

While hosts were generally spread out across the country, it is interesting to note that their basic formulas were remarkably similar (although each artist was still completely unique). Athough professional broadcasters with long TV careers, many had relatively short tenures as horror hosts. Despite this fact, it was during this period that they many would garner their largest base of fans who would not only equate them with happier times, but for also being their main source of their favorite type of movies. It is likely that many people reading this blog were deeply affected by a horror host from “back in the day” (the two men running this site included).

Because these hosts were fairly isolated, it is unlikely that anyone (outside of a horror host buff) would be familiar with everyone inducted at this ceremony. Even many of the presenters themselves, inducting individuals clearly before their time, had only a vague understanding of whom they were honoring.

TERROR FROM BEYOND THE DAVES isn’t going to pretend to be any more savvy…and we’re certainly not going to pretend to be older. We would, however, like to offer a special post to each of the inductees and, when possible, gain the perspective of an actual fan of the host’s as well. Anyone reading who may have their own memories of the aforementioned classic hosts, please contact either Dave via our contact link.

Count Gore De Vol, like Vampira, was covered in more detail in an earlier piece which you can read  HERE . The remaining inductees, however, will be given spotlights in the coming weeks. When possible we will share pictures, clips, and fan anecdotes. We’d like as many folks as possible to contribute so PLEASE send those memories and help us give these Horror Hosts the tributes they deserve!

* Basement Boy is not only a Horror Host but, as you can see, a talented Graphic Designer! If you are in need of a branding campaign, promotional posters, business cards, assorted graphics for your host shows (need a fake beer label or custom packaging for a fictional product?) please contact him at BasementBoyDC@gmail.com!