Growing up in the 70’s was an awesome time to be a kid. The toys were cool, Saturday morning cartoons were alot of fun and we had a regular dose of monster movies every week on the Creature Double Feature. I was a huge monster movie fan and every Saturday afternoon I could be found glued to the television watching such movies as WAR OF THE GARGANTUAS, RODAN and all of the GAMERA movies (as well as all of the classics we have grown to love). For us, the Creature Double Feature was not a hosted program (though a scary voice was used each week to introduce the movies). Then something happened in the early 80’s…all of a sudden the CDF was being hosted by some guy named the Son of Svengoolie. This started my love of horror hosts. 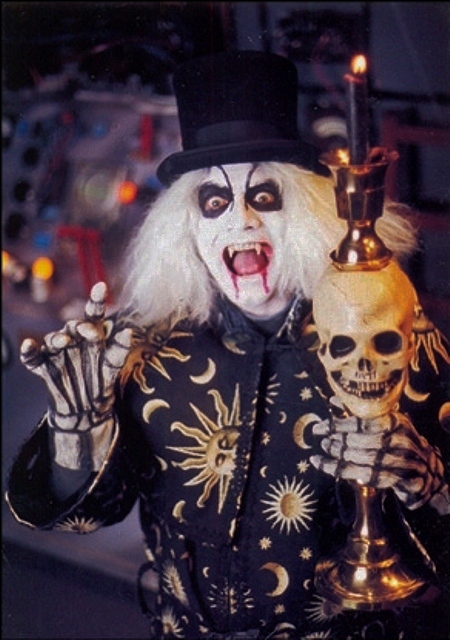 Over the years I have seen many of these hosts…some good, some not so good. A rare few stand on a pedestal for me though…they are above the good category. Zomboo is one of these guys. I was introduced to Zomboo and his amazing cast quite by accident. I had never heard of him and had never seen any articles done on him in any magazines. One day, while on eBay, I found an assortment of DVD’s for sale of his show and I thought I would take a chance. I can not express enough at how glad I am that I did! It didn’t take long to become hooked on this show and today, Zomboo is my all time favorite horror host! The character of Zomboo is a cross between Lon Chaney’s vampire character from the 1927 film LONDON AFTER MIDNIGHT, the Zombo character played by Louis Nye on THE MUNSTERS television show (originally broadcast on February 17, 1966) and Krusty the Clown, from THE SIMPSONS.

My first viewing of Zomboo was showing the movie DEMENTIA 13 from 1963. This movie is actually a fun little horror movie by Francis Ford Coppola (his directorial debut actually, working for Roger Corman) and though I had seen it a few times before, this viewing experience was something new altogether. It didn’t take long before I was laughing out loud hysterically at Zomboo and his cast (including Miss Transylvania, Bianca the Rack Girl and Werewolfie). The jokes came quick and some were so over the top I couldn’t believe that this show could actually air them! I was in awe of how Zomboo would insert himself into the actual movies or add perfectly timed sound effects, making a scene all the more enjoyable. It was also nice to watch a show that had the look and feel of locally produced television, a rarity these days. Thankfully the DVD promoted his website and I immediately went there and it wasn’t long before I was buying more DVD’s…I can’t think of a better addiction to have! I also wrote Zomboo and he was quick to respond and we have been in touch ever since.

A recent highlight for me was when Zomboo called me on the phone, after writing an article about him and his show for SCARY MONSTERS magazine. He told me he thought it was the best article he had read on the show and that was the best compliment I could have received.  If you live in the Nevada area he can be seen on KOLO Channel 8 out of Reno (though Zomboo tells me he is working on being on other stations as well as a possibly being on a web channel). The new season starts on Saturday, September 11, 2010 at 11:30 PM. For those of you not in his area I highly recommend going to his website (http://www.zomboo.com) and checking out what he has to offer – you will not be disappointed!

The cast of Zomboo’s House Of Horror Movies

Hanging with the ZZ Top “Eliminator” while awaiting the Svengoolie event