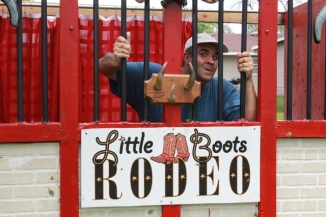 It was a muggy day here in Chicago when national horror host, Svengoolie, made his annual appearance at The Little Boots Rodeo in Elk Grove Village. Last year was my first visit to this event and, in regards to weather, was far worse with direct sunshine and even higher temps. At least today there was a breeze – though it’s worth noting that even if it had been hailing fireballs I’d probably still of shown up.

END_OF_DOCUMENT_TOKEN_TO_BE_REPLACED 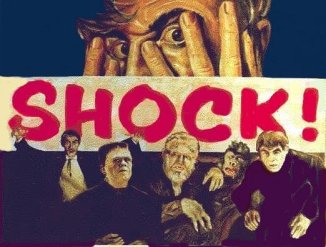 We were honored last week when Jason Hignite from HORRORHOUND WEEKEND asked us to induct The Universal Shock Theater Package into the Hall of Fame this coming weekend at the big event!  This historic collection of 52 films (one for each week of the year) given to commercial TV stations in 1957 featured Universal’s classic collection of monsters and led to both the proliferation of horror hosts as well as monster fans across the country!

END_OF_DOCUMENT_TOKEN_TO_BE_REPLACED

Our “Photo of the Month” is actually an autographed picture this time, thanks to our pal Dave Fuentes of the “Terror from beyond the Daves” website that he does along with Dave Albaugh. Dave went to a convention, where he met David Naughton- star of “An American Werewolf in London” – and those “I’m a Pepper/You’re a Pepper” TV commercials from the 70s. He told David about the old commercial parody we did years ago at WFLD where I combined the soft drink commercial with his werewolf transformation from the movie. Mr. Naughton said he had indeed heard of me, and thought the parody idea was “genius” (oh, now, you’re making me blush!). He also signed the below autographed picture for me, indicating that he drinks Dr. Rabies, too! He also told Dave to give me his congratulations on our program going national!