I admit that my love of the film Close Encounters of the Third Kind inspired this year’s summer road trip. The Devil’s Tower National Monument in Wyoming had played a pivotal role in the film and, after touring all the great UFO hot-spots in the Southwest last year with the other Dave, seemed like the next logical place to go. This amazing geologic feature is considered sacred to Native Americans and is also this country’s very first National Monument with no short thanks to President Theodore Roosevelt. Despite its history, I don’t think I’m alone when I site Close Encounters as my first introduction to it.

I was seven years old back when the film was released and, at that time, much more enthralled with another 1977 blockbuster, STAR WARS.  My only connection to the film was via a “bendy” alien figure my Grandma bought me (Grandma always understood my interests better than my idiot parents did).

END_OF_DOCUMENT_TOKEN_TO_BE_REPLACED 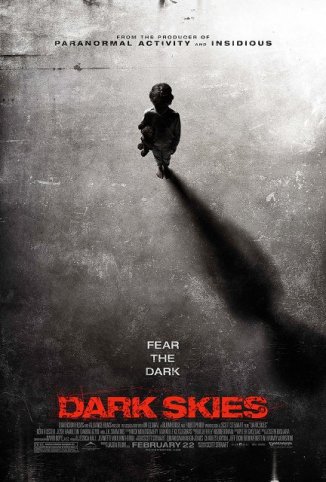 I have to admit that it’s been a while since I really enjoyed seeing a movie on the big screen. Oh sure, I’ve seen plenty of films that were “okay” and it’s always nice getting out with friends, but there have been few where I felt drawn in to the story or any type of reaction for that matter. Last Friday, I headed out to see DARK SKIES. I didn’t know much about the film except that it dealt with alien visitors and, ironically, I have been in a UFO kind of mood these days. I decided to give it and, must say, I was pleasantly surprised!