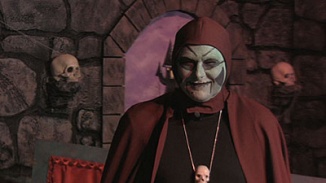 One of the more emotional and heartfelt moments of the Horror Host Hall of Fame ceremony that took place at Horrorhound Weekend convention in Indianapolis last March came with the induction of one of Indiana’s own. Captain Crypt and Fenriz Fatal were given the honor of inducting one of the country’s most prolific ghouls – Sammy Terry! The two hosts became visibly emotional while delivering their tribute and it was clear that, unlike many of the inductees whose awards were presented by hosts who didn’t have Clue #1 as to who they really were, these two clearly did. There is no doubt that the best folks to tributize any celebrity is the “fans” themselves and we Daves wished that could have been the case for all of them.