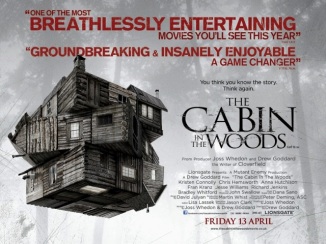 When I originally heard that this movie was being made I thought that perhaps it was an EVIL DEAD rip-off, especially since said cabin looked very similar to the one from the 1981 film. To be honest, I actually had no interest in seeing this film until I saw the preview, stating that it was co-written by none other than Joss Whedon, of BUFFY THE VAMPIRE SLAYER and FIREFLY fame. After seeing that I knew this was a film that I wanted to see and eagerly awaited it’s April 13th release.

END_OF_DOCUMENT_TOKEN_TO_BE_REPLACED

The genre crowd is abuzz regarding the news that our beloved “Slayer,” Sarah Michelle Gellar, will be returning to commercial television – both acting as well as serving as executive producer for a new Fall series titled “Ringer.” Gellar plays a woman on the run who conceals herself via the identity of her wealthy twin sister. I am a fan of Gellar and absolutely wish her all the best and will definitely check out the new show despite having mixed feelings.