If there’s any event here in Chicago that signifies the transition from fall to winter it’s gotta be Days of the Dead. Last year I remember arriving on a clear evening only to leave later that same night amid piles of the season’s first snow while dodging salt trucks on the way home. Thankfully that didn’t repeat itself this year; just a simple thirty degree drop in temperature that’s held ever since. So far as the fans go, a tornado probably wouldn’t keep them away and this year promised something extra special. You could practically feel the exuberance on social media when it was announced that rock/horror legend, Alice Cooper, would headline their celebrity guest list. Not only would the singer/song-writer/actor be signing autographs for fans but they could also do a professional photo-op with him for an extra $55 which, in the expo world, is actually pretty darn cheap. It was a smart move as it guaranteed this convention not only see it’s “regulars” but a fair share of newbies as well.

END_OF_DOCUMENT_TOKEN_TO_BE_REPLACED

In early 2015, I wrote a blog on Remco Toys, emphasizing their 9″ monster toys of the early 80’s (see original piece HERE). This piece was also our introduction to artist Kris Mobley, a fan of these toys with the plan of immortalizing them in art form. Later in the year he introduced to the world the first in the series, an art print of the Creature From The Black Lagoon (see piece HERE). Kris is now back to announce the 2nd print in the series is almost ready to go. This time he is offering up Dracula.

END_OF_DOCUMENT_TOKEN_TO_BE_REPLACED 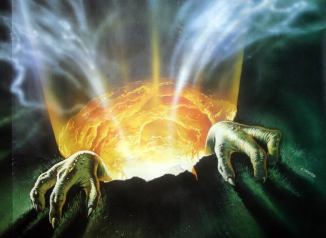 A few years ago I had the honor of covering THING-FEST  at Days of the Dead Indianapolis where Canadian super-fan, Joe Hart, brought his immense assortment of props and collectibles associated with John Carpenter’s The Thing. Joe has a heart of gold and his enthusiasm for the movie, coupled with his enviable collection, made for one unforgettable weekend! Many of the actors from the film were on hand as well and one of my favorite moments was getting a photo with Thomas G. Waites (“Windows”) along with the actual microphone prop he’d used in the movie. I’ll always be grateful to Days of the Dead for hosting Mr. Hart as it was the magnetic pull of his collection that inspired me to cross state lines and attend!

END_OF_DOCUMENT_TOKEN_TO_BE_REPLACED

While checking out the vendors at this year’s Days of the Dead Chicago, I was pleased to see that Jay Langley and his signature Scarebears were among them! I love sinister toys and particularly enjoy gruesome Teddy Bears which a few amazing artists out there have been crafting; and each with their own unique touches. We’ve featured a few of them on this site but, after spotting Jay and his latest batch, I realized (to my great shame) that the Scarebears had yet to be one of them. That’s pretty surprising since I was an instant fan when I first saw them a few years back; enamored with their EC Comics’ style gore and signature skulls with eyeballs! They’re also affordable by convention standards and obviously a big hit with many of my fellow horror buffs who I often see walking around with one at events. I own two of them myself and look forward to adding more of them before my Terror Dave days are over.

END_OF_DOCUMENT_TOKEN_TO_BE_REPLACED

I was on my way to this year’s Days of the Dead Chicago when the first big, fluffy snowflakes appeared. Despite the local news crowing about it all week, I remained in denial until the evidence was sticking to my windshield and hindering my traffic time. Part of me was hopeful the bad weather meant dealing with fewer crowds at the event but those dreams were soon dashed after I arrived at the Marriott Hotel in Schaumburg and was immediately directed to a guest overflow parking garage. Never underestimate the devotion of a horror fan; not only does it defy the elements but remains strong even after Halloween.

END_OF_DOCUMENT_TOKEN_TO_BE_REPLACED 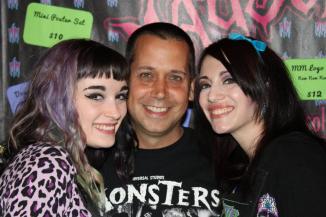