Board games have sure come a long way since the days of Sorry and Monopoly. My family still enjoys those games from time to time but with my youngest now sixteen years old, we’ve been seeking more sophisticated games to bring to the table. A couple of my kids have formed gaming groups with their friends and I was just in the process of putting one of my own together when the Covid-19 virus hit. Pandemic aside, we’ve been living in an exciting era for board game enthusiasts with new releases being revealed each month. Not surprisingly, many of our favorites have movie themes or horror elements that make them even more enticing.  Here are few in my collection we’ve been playing since the “stay at home” policy went into effect. 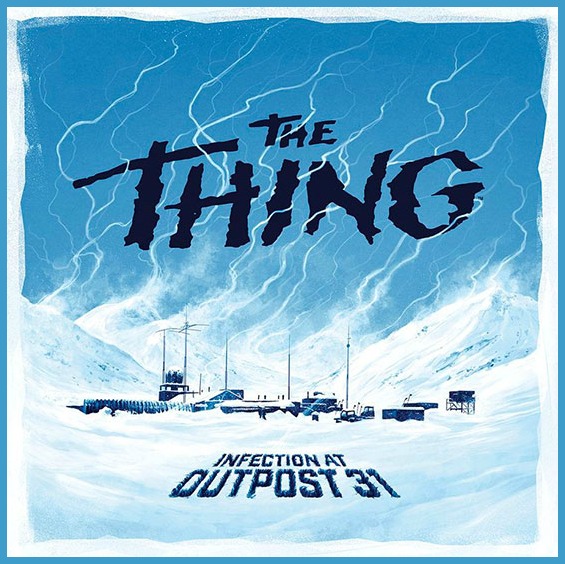 The THING: Infection at Outpost 31 (Mondo) – I spotted this game at  C2E2 (Chicago Comics & Entertainment Expo) a couple of years back. I knew I had to have it but it was priced at $80 so I decided to think about it for a bit before making the purchase. Aside from the steep price, I really didn’t like the idea of walking a half mile back to my car lest having to carry that thing around the convention all day. At the same time, we do love The THING (1982) and I figured it would provide an extension of that fandom along with constructive family time. If nothing else, it was a great collectible but by the time I made it back to the dealer (a good thirty minutes later) someone had already snatched it up. Now I REALLY had to have it! As soon as we got home that night I located one online for $60 and quickly bought it. It’s an impulse buy I’ll never regretted since the game quickly sold out and you’ll be lucky to land one these days for under three hundred bucks! That’s the first hard lesson I learned about purchasing board games – many of the kick-starter ones will sell out and skyrocket in price rather quickly. As for the game, I wasn’t wrong about its entertainment value either. Players choose a character from the John Carpenter classic with one (or more) being infected. It’s a game of cooperation with your infected team-mate(s) secretly being uncooperative. The team experiences their fair share of challenges before getting to the helicopter and off to safety. 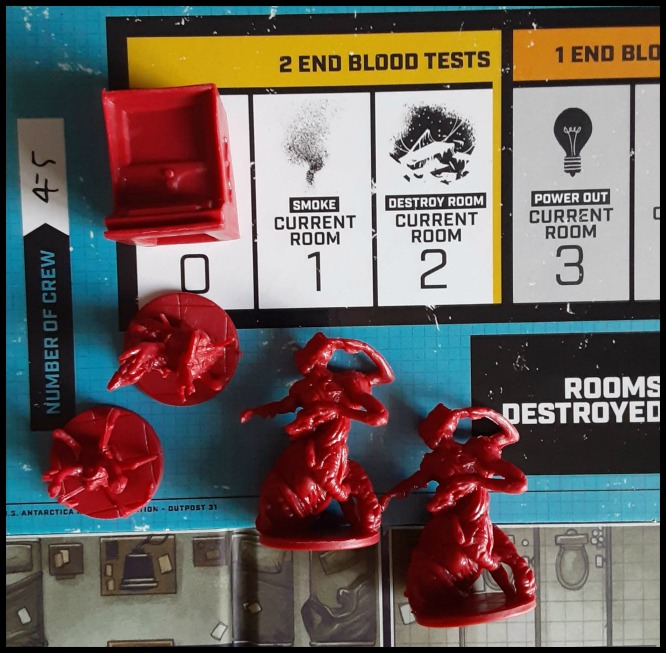 Horrified (Ravensburger) – The Universal Monsters run amok in this surprising hit from last Halloween! It’s a fun cooperative game that pits players against Dracula, the Wolf Man, the Invisible Man, the Mummy, the Frankenstein Monster and his Bride. There are appearances from many of the film’s side characters such as Renfield from Dracula (1931) and even Chick and Wilbur (a.k.a. Abbott and Costello) from Abbott and Costello Meet Frankenstein (1948). Players choose which monsters they’d like to take on; the challenge level determined by however many you choose. Each monster has their own set of skills as do the players which means no two games are ever alike. If you aren’t a competitive person, this game also brings out the best in camaraderie and well-worth bringing to your game table! It also inspires you want to revisit those old classics making it the ideal activity activity right before or after an episode of Svengoolie. 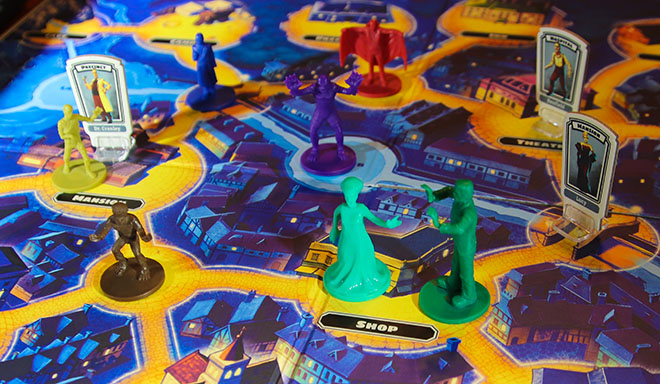 IT: The Evil Below  (USAOPOLY) – This game features an awesome design with a clear box top window revealing Bill Skarsgard’s Pennywise peeking from behind a balloon. The popular 2017 retelling of the Stephen King classic has found its way to several board games; even boasting its own Monopoly and Clue. Here it stands on its own merit with players portraying their favorite member of the “loser’s club” from Chapter One. It was a bit complicated at first but thanks to some of my favorite YouTubers like Geek and Sundry’s “Game the Game” we were able to figure it out. 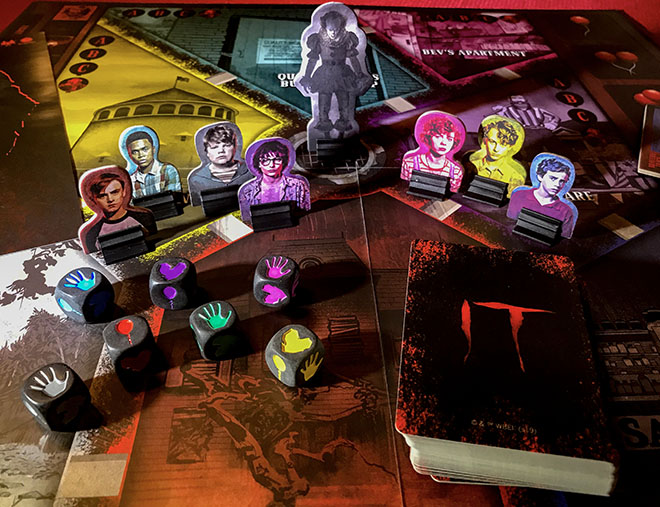 JAWS (Ravensburger) – The iconic film makes its way back the gaming table – this time for adult fans. This is a two act game witch half of your play taking place around Amity Island and the rest on the ORCA; taking the shark on in open water. One player is the shark and the rest its quarry. As of this date, the game is readily available at TARGET or online. 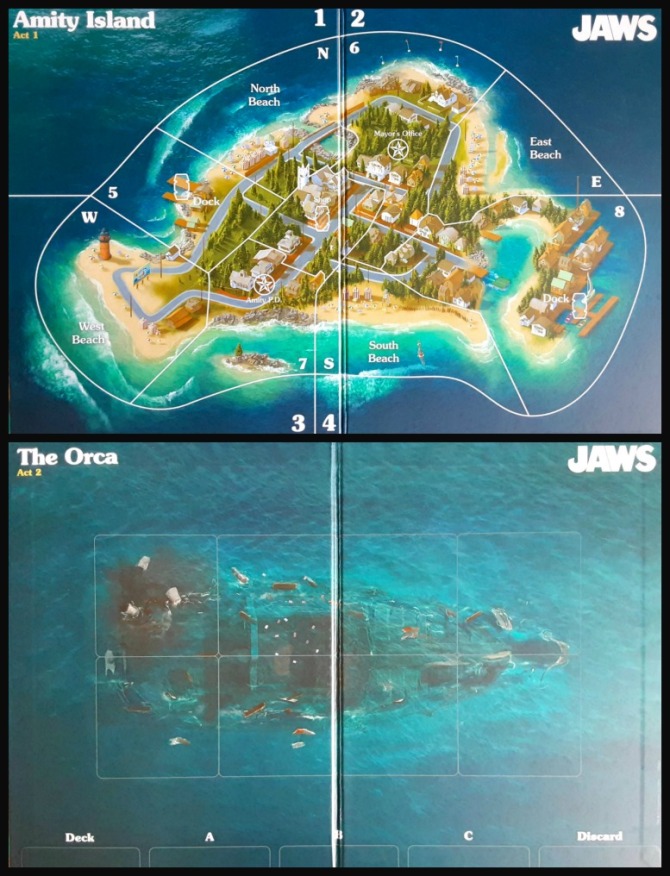 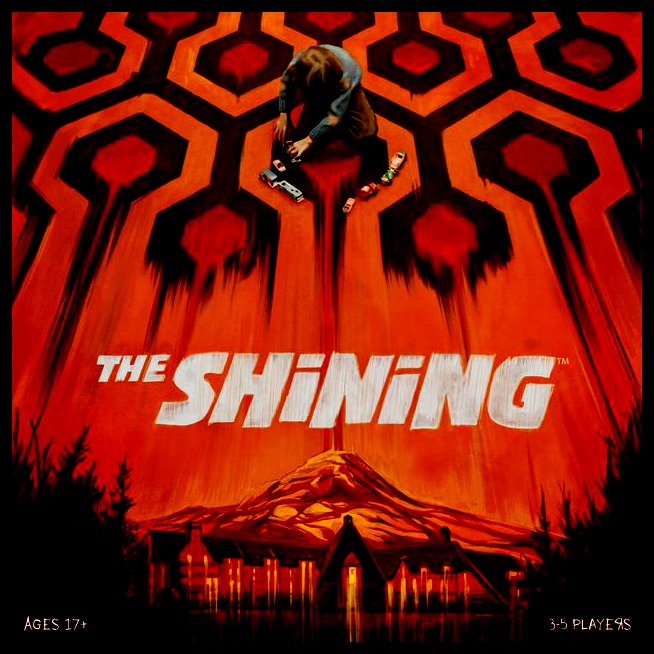 The Shining (Mixlore) – This game just arrived earlier this week and I confess we haven’t played it yet. I will say, it looks sharp and we’re looking forward to diving in…

BONUS game from the past…

ALIEN (Kenner) – When I was a little kid back in the ’70s I used to beg my folks to take me to see scary movies for which the answer was almost always “No.” I swear the reason I’m such an avid collector of physical media is because I hate being told what I can and cannot watch. I was eight years old when ALIEN was released in May 1979. The movie was rated R but, for some reason, Kenner Toys (whom at this point were already churning out my beloved STAR WARS action figures) had the merchandise licence. Consequently, they put out that amazing eighteen-inch ALIEN figure as well as fun board game that I’m still playing forty years later. It would be years before I would finally be able to watch the movie, so that game was all I had in the interim. Now, obviously, this is an easy play compared to the ones mentioned above, but you gotta start somewhere and this, along with Kenner’s “Escape the Death Star” were my favorites. Incidentally, the latter has been re-released recently and includes an exclusive Grand Mofff Tarkin figure. Me, I’m content saving some cash and using my original copy despite the wear and tear.

Some non horror games we’ve also been enjoying are Wingspan, Watergate, and MARVEL Champions. Family time is great but once “social distancing” becomes a bad memory, we’re also looking forward to rejoining our peers and bringing our favorite games with us. And if there’s anything this crisis has taught us, it’s the importance of making quality time with extended family and friends.