Chicago’s 2019 Days of the Dead took place at the Crowne Plaza in Rosemont; a new venue for this convention but certainly not for me. After fifteen G-FESTS and a handful of Flashback Weekends, I was

well acquainted with the place as well as its monolithic manager, Don Johnston.  This event took place last November; not the most ideal time for me but workable. Several months earlier, my friend Jason Schoolcraft generously purchased VIP passes for us and arranged to fly in from New England to join me. As many of you know, the man loves film and I always enjoy our pre/post-convention movie marathons. We arrived at the hotel around 3 PM that Friday and were greeted by my friends, Ron and Angela Urban. I was just introducing them to Jason when Richard Dreyfuss breezed past us. The Academy Award-winning star of JAWS and Close Encounters of the Third Kind was a bit shorter than I’d envisioned and had noticeably bad knees but there was no denying it was him.

Dreyfuss went straight to the VIP room located in the adjoining Caddyshack Restaurant. Don Johnston appeared moments later to greet us. Days of the Dead was new to Mr. Johnston and he was just getting a feel for it. That’s the weird thing about horror cons; despite them offering the same things (vendors, celebrities, panels) they’ve each got their own flavor. Consequently, Flashback Weekend, Days of the Dead, and Horrorhound all have this “same yet different” quality to them despite catering to the same fans. In my opinion, “Days of the Dead” is a bit edgier  – s solid “R” to Flashback’s PG-13. Here, F-bombs are routinely dropped at panels and their costume contest host, Sprinkles the Clown, is more frightening than Flashback’s Svengoolie. 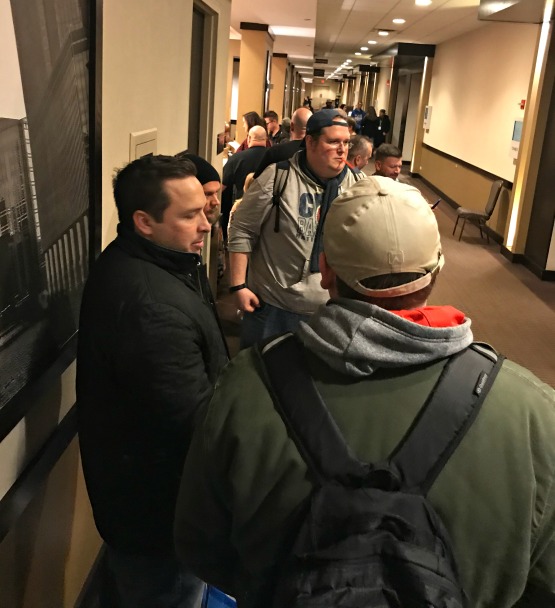 The line to pick up VIP packages had a slow start but was worth the wait. Each received a gift bag and gruesome t-shirt that I was surprised to see actually fit me. Usually, a plus-sized guy like me has to stuff souvenir shirts with pillows to stretch them out first. Even then, I wouldn’t exactly call them comfortable.

Now that we were all “badged” up, it was time to explore the dealer’s room – something we were able to do an hour before general ticket holders. The first booth I passed was a man selling handmade wooden signs that were instantly recognizable to us die-hard horror fans. These included the “Slaughtered Lamb” pub from An American Werewolf in London (1981) Friday the 13th’s Camp Crystal Lake, and Silver Shamrock from Halloween III (1982). The man running the booth lit up when he saw me. “Hey, how have you been!? Man, it’s great seeing you again!” I’m pretty sure this was a case of mistaken identity as had no clue who this guy was but went along with it anyway. 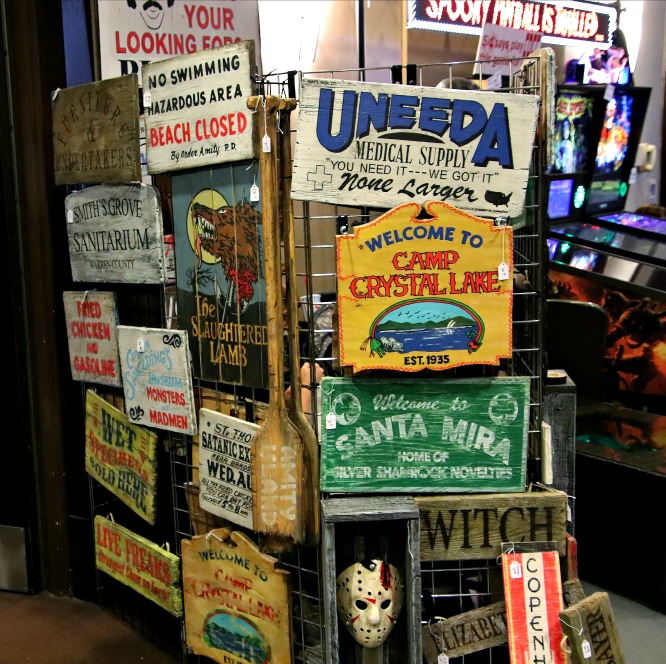 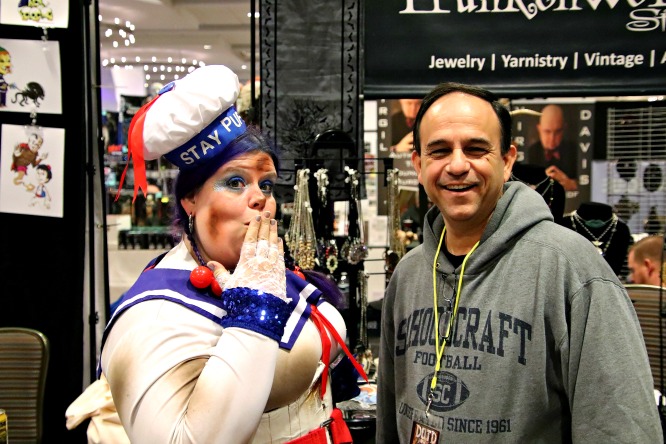 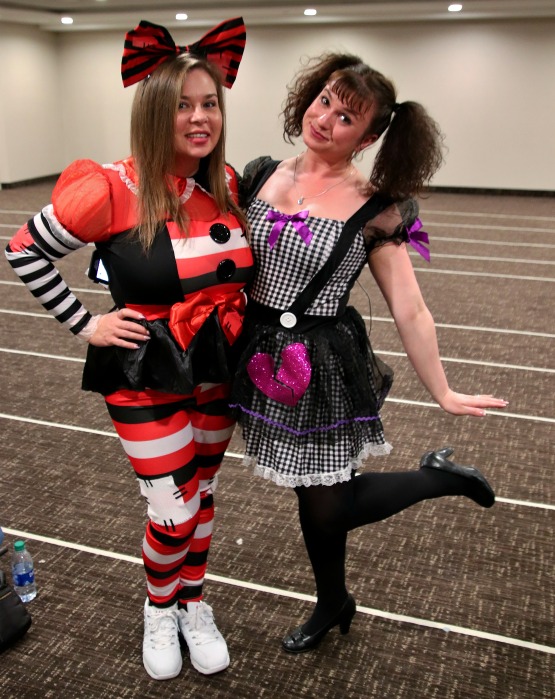 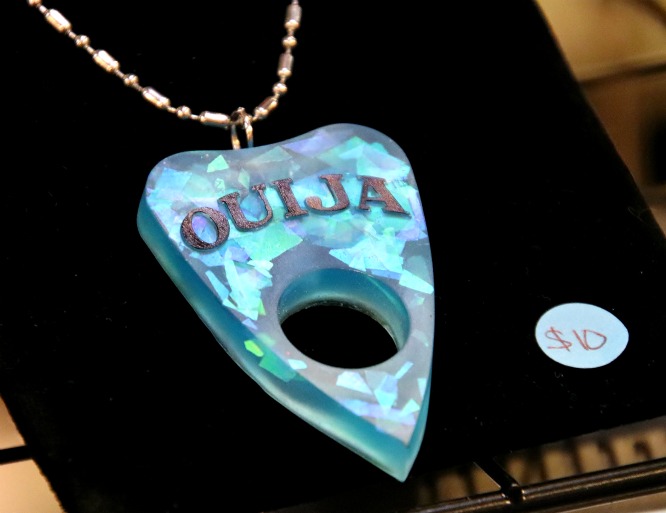 Sympathy card for the family of Sid Haig 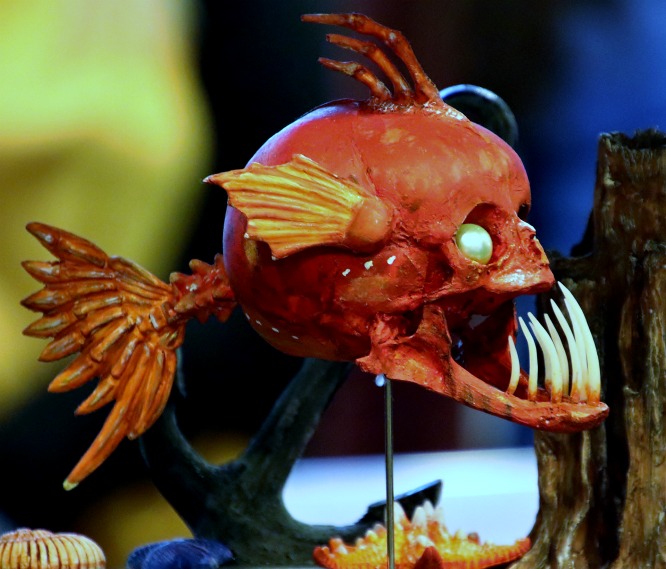 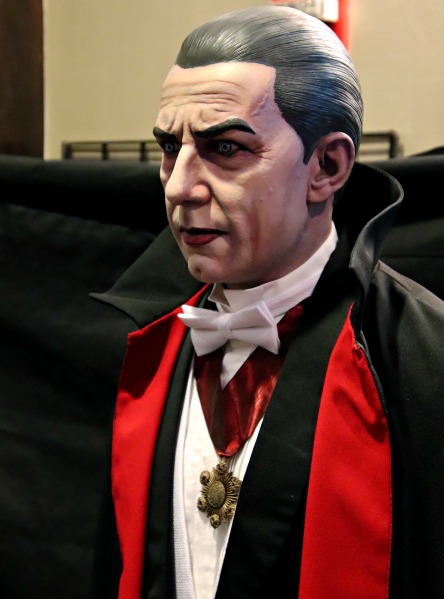 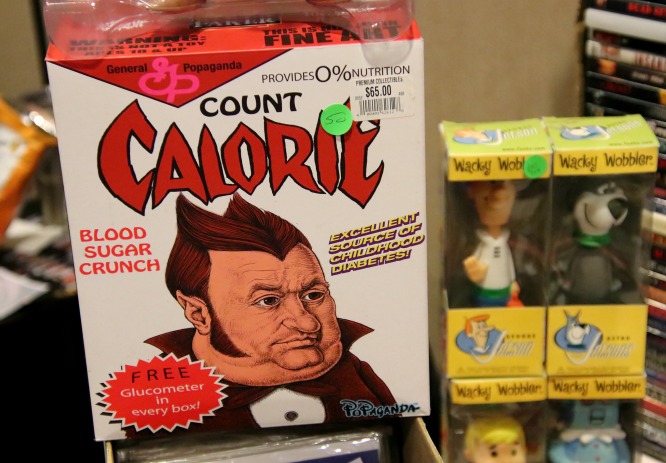 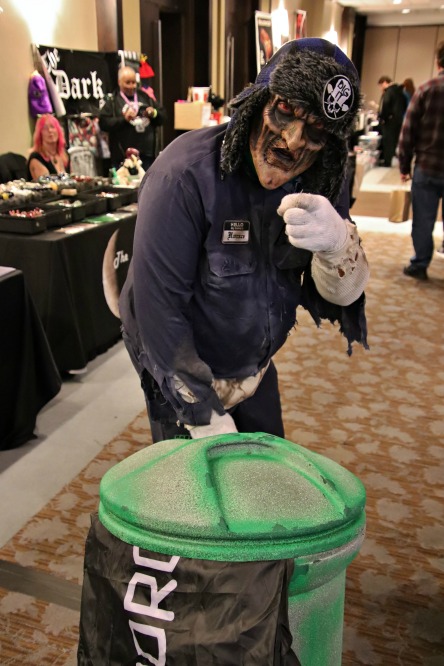 What usually happens when I do a dealer’s room with a friend or friends is that we’ll all start out together before being completely separated ten minutes later. It happens when I’m with Jason, it happens when I’m with the Urbans, and this time it happened with all three of them. This is probably a testament to convention dealers offering something for everyone. As for me, I was quickly drawn to a booth selling a hodgepodge of items including an animatronic Creature from the Black Lagoon. This item was part of a collection that Universal Studios officially licensed back in the early ‘90s. I used to have the Wolf-Man but gave it to the horror host, Svengoolie, for his show a few years back. Considering he’s the only horror host legally presenting Universal films, I thought he’d be the ideal steward of the Wolf-Man. The Creature also fits that bill while having the distinction of being Sven’s favorite Universal monster. Since the price was cheaper than what I’ve seen them going for online, I picked this one up for him. He received it about a month later as Sventa Claus (which I covered before the holidays) and it made its television debut last weekend. 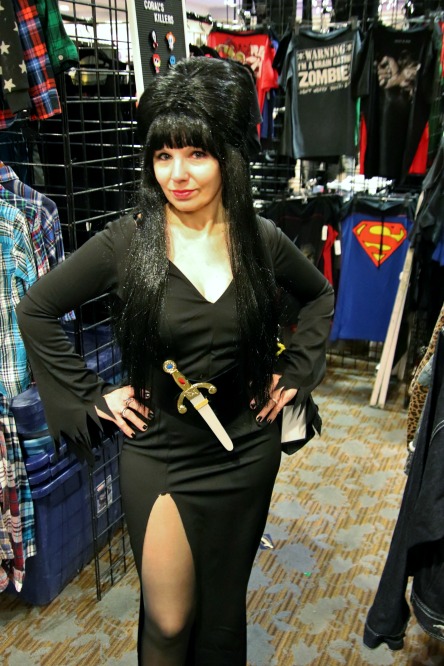 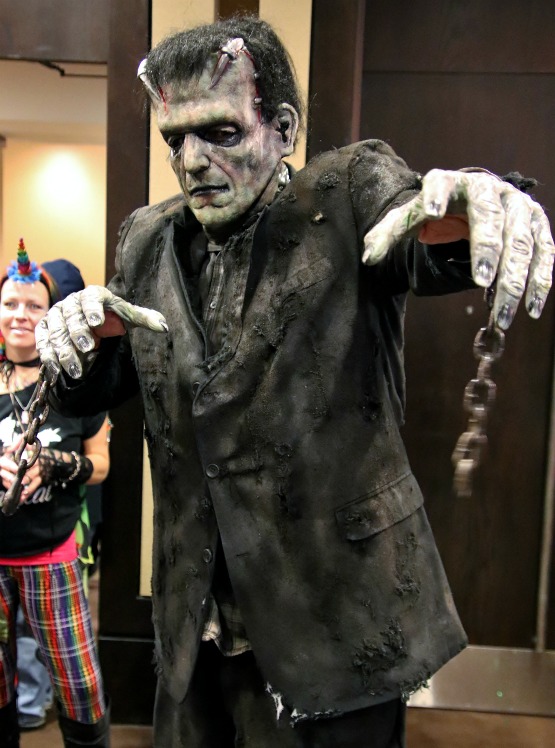 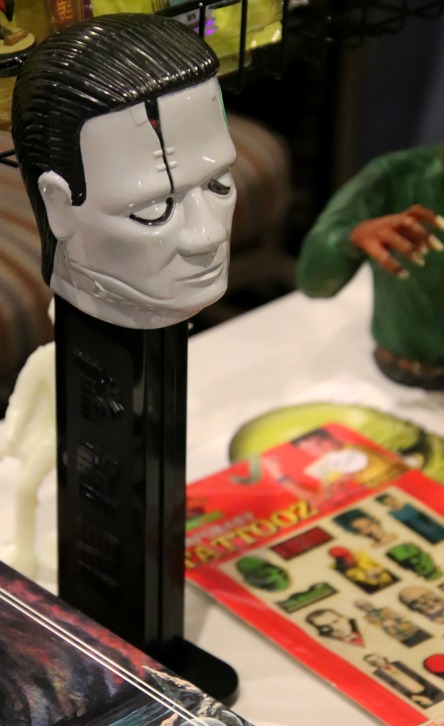 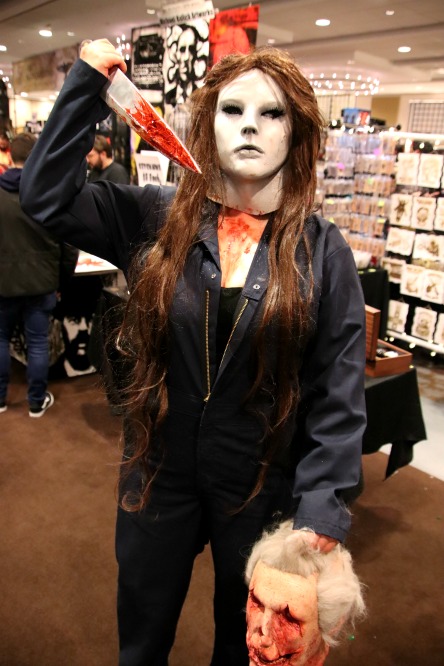 This event took place the weekend of November 22nd – ten days after the debut of Disney Plus’ hit STAR WARS series, “The Mandalorian.” One ambitious artist was already selling images of its title character as well as the child a.k.a. “Baby Yoda.” Despite having an overabundance of wall hangings, I was almost tempted to buy this out of general principle. “Baby Yoda” and the Mandalorian is one of the few STAR WARS projects that hasn’t caused this old-school fan to cringe in the last 20 years. 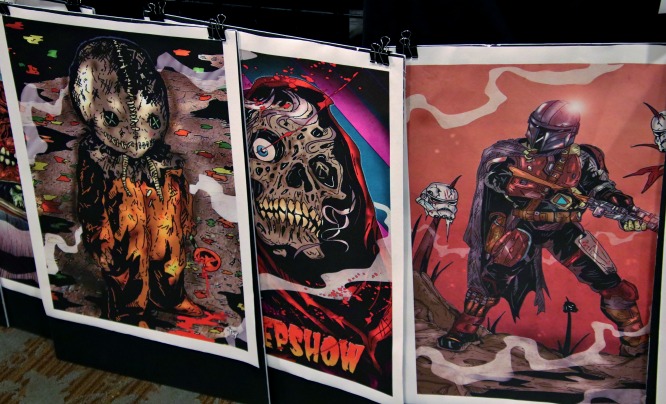 Scarebears are a “Days of the Dead” staple but this time they arrived without their charismatic creator, Jay Langley. Jay was unable to make this event but had a couple younger assistants take the reigns in his absence.

Most savvy merchants tailer their goods around the convention’s to guests. Consequently, the 2019 Chicago Days of the Dead was a JAWS extravaganza.

Barry the “Clay Guy” adds Hooper to his collection! 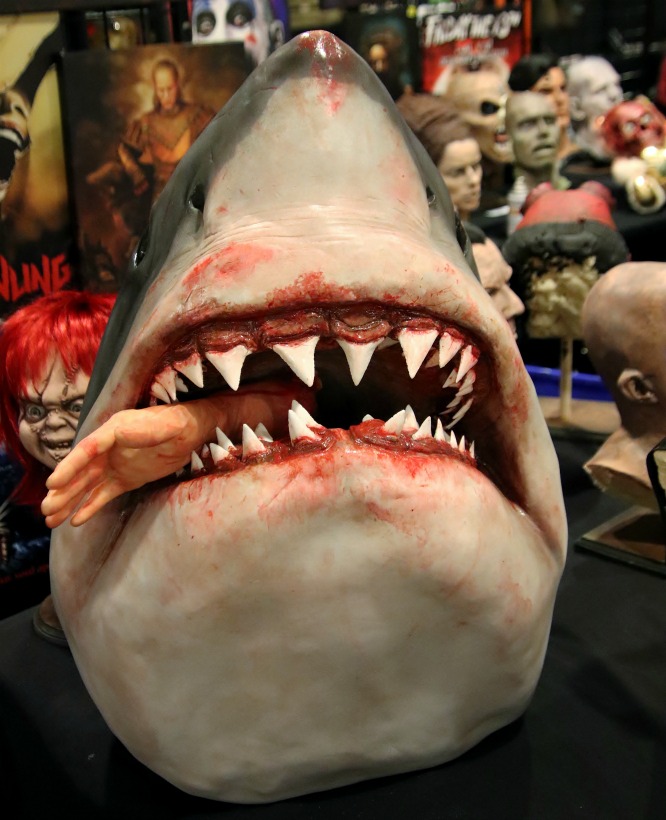 Celebrity signing booths were dispersed throughout the convention and although Eugene Clark from Land of the Dead (2005) wasn’t necessarily the most famous among them he could very well have been the smartest. Not only does he dress up as his “Big Daddy” zombie character from the film but he encourages his fans to get photos with him in character. This is the kind of fun stuff horror fans love. Great job, Mr. Clark!

I eventually met back up with Ron and Angela and she pointed out an item she thought I’d be interested in. It was a Trick r Treat Sam figure which Angie knows I’m a big fan of. Despite my Sam display growing larger each year, I somehow missed this figure. The booth she brought me to was selling it for $30 while other vendors had it for over forty. Still, I chose to hold off – a decision that would pay off later (and in a future post). For the next few minutes, we took another lap around the dealer’s room. 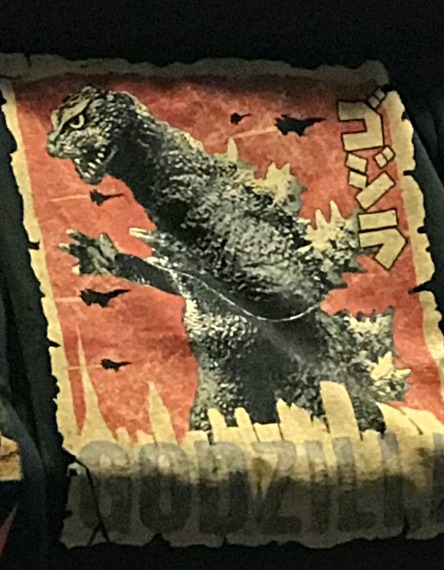 Godzilla shirt I picked up for my son 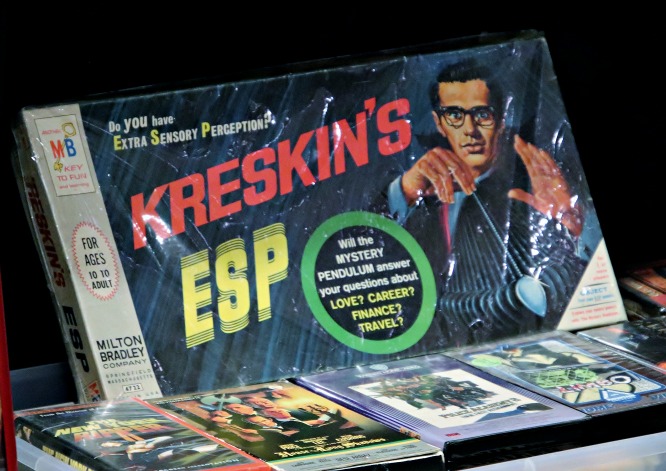 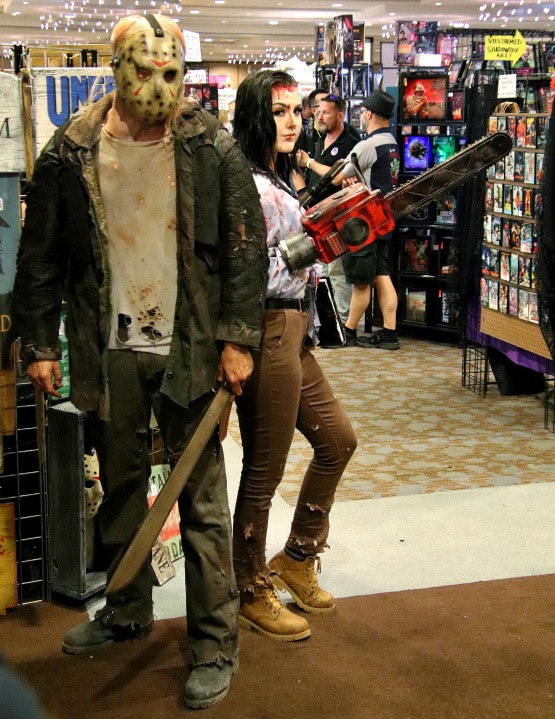 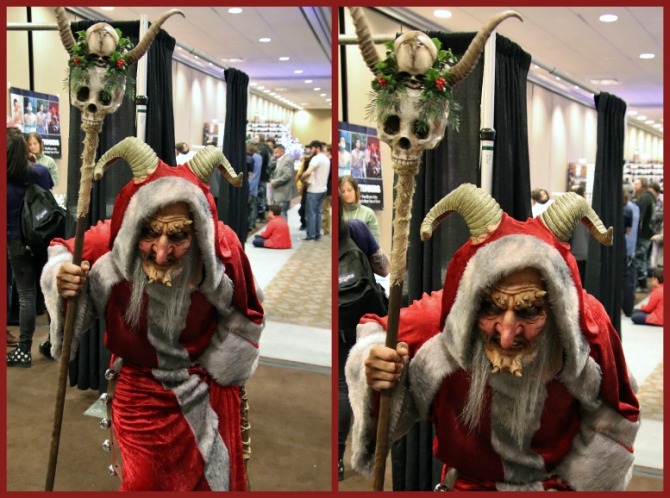 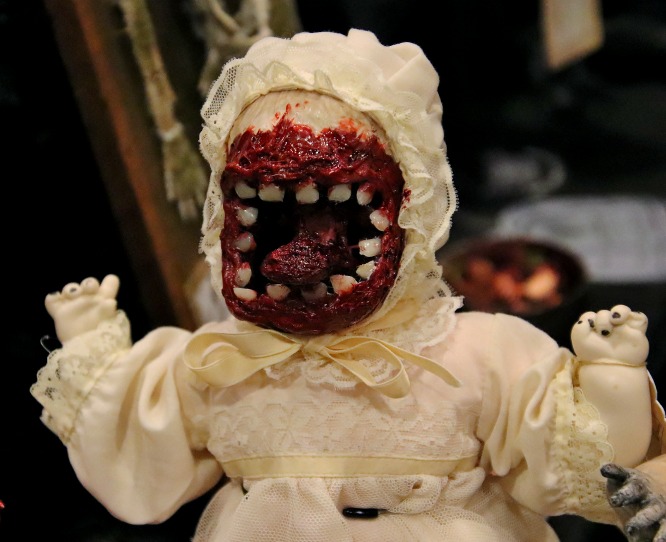 As the Urbans took off to have a couple celebrity encounters, Jason and Don showed up. Remember when I mentioned how the Crowne hosted Flashback Weekend? Well not long after “Days of the Dead” was booked, they chose a new hotel for 2020. Coincidence? I have my doubts. Regardless of whatever perks the new venue may offer, they won’t have Don Johnston and that’s too bad. The man works his ass off at these events; putting in extra hours and seemingly everywhere at once. I just knew the “Days of the Dead” folks would really like him –  and am guessing they did since they already booked the Crowne again for 2020. Don’s hard work at Flashback also makes him an unsung hero in the Svengoolie-verse; always making sure the host is treated like the legend he is while accommodating his crew and an old fanboy like me. 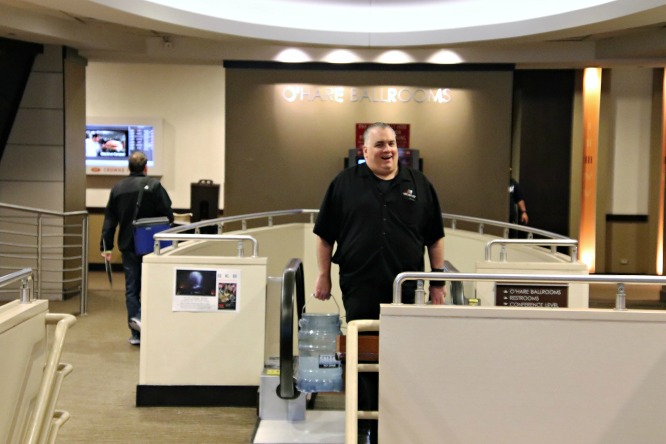 The Rise of Don

We all reunited for dinner at the VIP room – by far the greatest perk from that special pass. Not only did they supply free food all day (breakfast buffet and hamburgers, fries, salad, sandwiches, and soda for lunch/dinner) but it was the same room used by the celebrities themselves. It was, without question, one of the best VIP rooms I’ve seen at any horror cons, with great food that allowed its holders more cash for the event itself. I couldn’t have been happier. 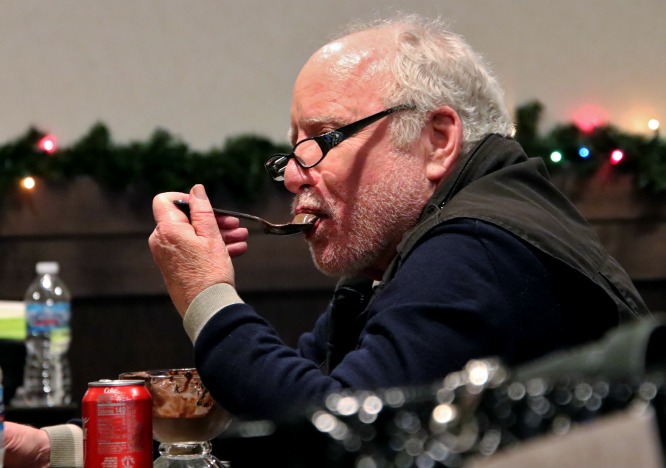 Last fall I discussed the Friday the 13th fan film, Never Hike Alone (2017) during my coverage of Horrorhound Weekend. The film’s director, Vincente DiSanti, was here as well and selling limited release blu-rays. At Horrorhound he was selling the movies first physical media release in a red case and this time around it was the second, blue one.

My buddy, Chuck Ryan, is also a fan of “Never Hike Alone”

The film was being screened later that night and DiSanti was supposed to introduce it. Jason and I decided to attend this rather than the celebrity panels with the Urbans. This would prove a mistake. I was hoping for a Q&A along with insights to his upcoming sequel project, Never Hike in the Snow. Instead, he basically walked upfront and was like, “Here’s my movie!” before leaving.  Once the movie started we were pretty much stuck there and saw it through. After it was over we called it a night. The panels were starting early, and I wanted to see if the Soska Sisters were every bit as marvelous as everyone says they are.

Next Week….the Soska Sisters vs Hollywood!