Since we Daves met up in Pennsylvania last March, and then again for his birthday in New England in May, there were no epic road trips planned for us together this year. I did have several potential ones in mind for 2017 before retooling one a bit to do with my kids instead.  It involved us driving through South Dakota, going as far west as the Devil’s Tower in Wyoming. Since my eldest son, Alex, is stationed at a military base in North Dakota, we’d also make a point to go and visit him as well. Ever since my marriage crumbled about five years ago and we Daves decided to incorporate a few Ohio zoos in addition to a Horrorhound Weekend, road trips have become rather sacred to me. It’s an opportunity to escape the mundane acts of real life and remind ourselves that there’s a big, beautuful world out there. The kids had never gone on a big road trip before and certainly not one designed by me. So hop on in the passenger seat, folks, and let’s relive this WEIRD solo Dave adventure together…

We left early on the morning of Monday July 31st. Alex only gets to leave his base on weekends so I had to schedule the days in such a way where we’d be in his neck of the woods by Friday evening. The first night we stayed in Omaha, Nebraska which is about seven hours from Chicago. I always try to find bizarre roadside attractions to break up the monotony of long drives but, with the bulk of our day going through Iowa, didn’t have much to work with.

In fact, I don’t mean to offend any Iowans out there, but driving through that state was boring as hell. It’s pretty much right up there with the duller parts of my own state and the only semi-interesting thing we encountered was the “World’s Biggest Wooden Nickel.” Having never heard of a “wooden nickel,” the kids thought I’d lost my mind when I pulled over and wanted to get a photo with what they perceived as nothing more than some round sign.  “This is for Inga,” I explained.

They all rolled their eyes knowing full well that “Inga” was my codename for Instagram and “Fannie” for Facebook. I should mention they’re a lot more favorable to Inga than they are to Fannie whom they regard as an “old people thing.” 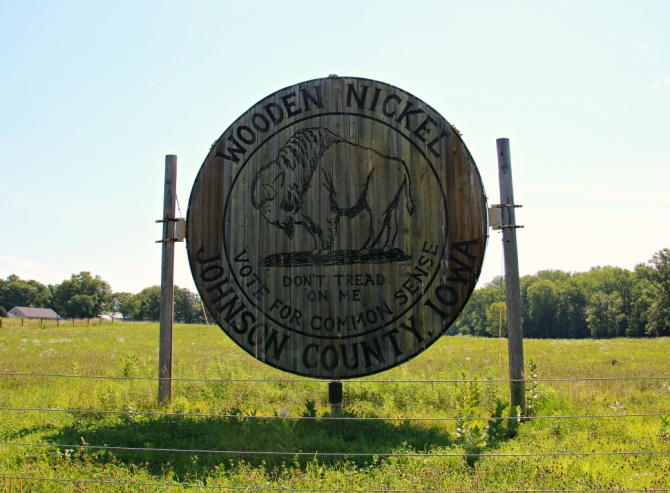 After a short visit to their Blank Park Zoo, we FINALLY ended our Exodus through Iowa and made it to Omaha. 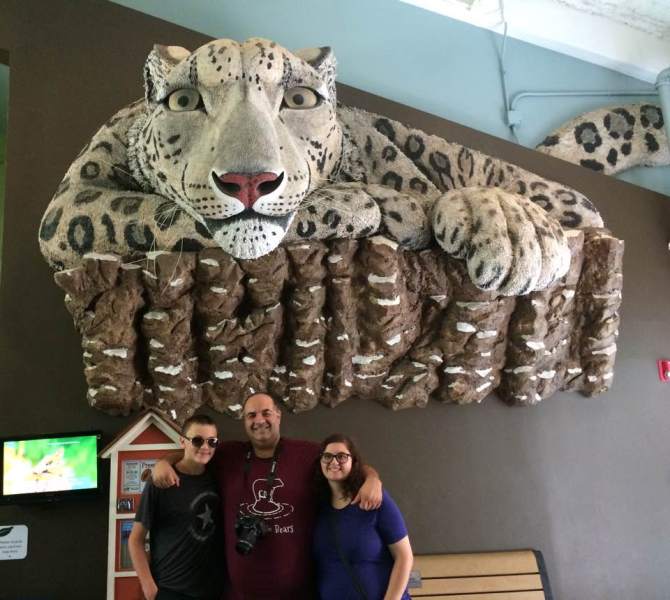 Just like Iowa, it’s pretty dull but, at the same time, has one of the BEST zoo’s in the country. It’s kind of like when you’re a kid trying to whittle down a Tootsie Pop before reaching the gooey center (until you reach adulthood and realize you’d been doing all that work for a crappy tootsie roll). There’s no fun way to get there but, by golly, it’s sure worth it once you do!

In the meant time we found a giant fork with pasta…

The King of Carbs!

…and Omaha’s famous “Hi” tree. In case you’re wondering what the hell that is, it’s actually two trees; one that naturally grew to look like a lower case “h” (before humans started using unnatural means to make sure it stays that way) and a straight one (also trimmed to maintain its alphabetical significance) that’s supposed to be an “i”. Now unless they figure out a way to hover a dot-shaped piece of bark over it, that “i” looks a lot more like an “l” to me but, hey, after driving all day I’ll take whatever Omaha greeting I could get!

Having planned road trips with the other Dave for about five years now, I pretty much know what to expect from the main hotel chains. The challenge is always finding something affordable (especially since you aren’t staying long) but without getting bed bugs at some dive.  I’ve stayed at a bevy of LaQuinta’s and have always had nothing but positive experiences with them…until Omaha became the exception to the rule. I knew we were in trouble when I walked inside the lobby to check-in and there was nobody there nor responding to my ringing the bell. Fifteen minutes passed and I had three people behind me before some gal casually strolled in and, with no apology, casually asked, “Oh…can I help you with something?” The “Hi” tree had better manners than she did! The room was no better with bad mattresses and a light switch for the bathroom outside of it. I’ve encountered this before and it makes absolutely no sense to me. The TV only offered seven basic cable stations, too. Isn’t HBO supposed to be a standard hotel amenity???

After check-in we were all hungry but downright sick of the car. Consequently, we opted to go next door to some regional chain restaurant called “Runza.” I never heard of them before but, later in that bathroom, may have figured out where they got their name from. It basically specialized in glorified Hot Pockets inspired by German immigrants and, if you’re thinking of going, all I can say is Nein!

The hotel boasted a pool so the kids went to swim while I looked forward to taking a hot shower and getting some alone time. Unfortunately, not two minutes later the kids returned saying the pool was full of dead bugs and they weren’t going to swim in it. Our first day on the road seemed like a total bust and I was pretty sad about it. I really wanted their first road trip with the old man to be fun but felt like I was disappointing them instead.  Fortunately, things would start getting MUCH better the following day…