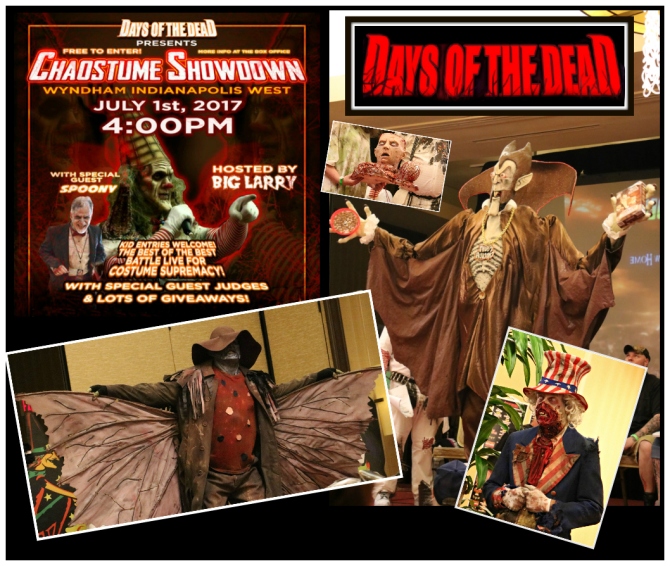 If there was a finale for our weekend at the 2017 Indianapolis Days of the Dead convention, then surely the costume contest was it.  I arrived at the hall early and roughly the same time that many of the contestants did. Just the few I passed on my way in let me know I was in for a treat. Some of the costumes weren’t just creative but downright brave. Case in point, a giant-sized Count Chocula that towered over all of us. As hard as it was for me to maneuver that crowded hallway, I could only imagine how tough it must have been for him.

Near the entrance were a couple of sinister clowns pushing an Ice Cream cart. One of them had a big waffle cone sticking out of his head and two more jutting from his shoulders. In terms of killer clown creativity, this guy had definitely reached new heights!

I picked out a spot that was close to the stage but off center for optimal photography. My buddy, Jason, joined me about ten minutes later after finishing up his Dawn of the Dead photo op discussed in our last post. Just before the contest started, the Ice Cream Clown I mentioned earlier took the stage. Apparently he goes by the name “Big Larry” and was the event’s emcee as well as a Days of the Dead staple.

There were other costumed folks outside the hall that weren’t contestants but no less impressive.

I especially loved a guy dressed as Krampus that Jason and I ran into earlier that day. It was funny because while we were ogling him there was this guy (whom I’ll refer to as “Joe Blow” for blogging purposes) standing next to us and totally confused.

Joe Blow: Who’s that supposed to be?

Dave: He was the lead villain in that hit movie that came out a couple years ago called Krampus. You know, he’s like an evil Santa?

Jason: (irritated) IS THIS GUY AT THE RIGHT CONVENTION???

As the show began, I basked in having obtained the perfect seats when “James,” a man I’ve been bumping into at conventions for years and has his own website, got up and planted himself between the stage and audience so he could get the best pictures for himself. Now James and I have always gotten along just fine but this little maneuver irked the Hell out of me which is why I’m not mentioning the name of his website nor linking to it. Note to fellow bloggers and webmasters…please be considerate of your fellow horror fans!

Big Larry was joined on stage by a mischievous zombie named “Spoony” who was a lot of fun, though more interested in cheese than he was in devouring brains. Throughout the event, the two would toss out free Days of the Dead T-shirts to the audience and especially for those that happened to bring along some cheese they could trade it for.

Things kicked off with the kid’s category, though there were only three contestants. The winner was dressed as Samara from The Ring but, in my opinion, she looked a lot more like Kyra Schon’s “Karen Cooper” from Night of the Living Dead. At the end of the contest she received a special item (severed head) donated from Distortions Unlimited.

The adult costumes were a lot more detailed, including that giant-sized Count Chocula I mentioned. I held my breath the entire time he worked his way up and down the stage steps!

I noticed there seemed to be a lot of Medieval costumes in this contest such as barbarians, ogres, goblins, and one lady who was dressed as a Satyress (female Satyr). She brought along a bunch of potions and started offering them to Big Larry as samples. I’m not sure what was in those bottles but, after going through about three of them, I was eager to get back to the contest and wished she’d clomp them hooves of hers off stage!

There was another gal of note who was dressed as a tiger trainer from some undead circus. I’m guessing she’d gotten fed up with one of her felines as she was walking around with its severed head. 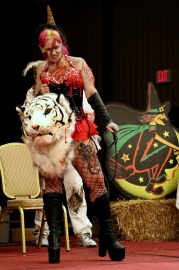 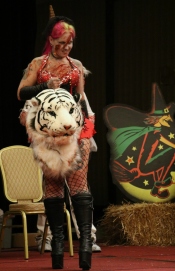 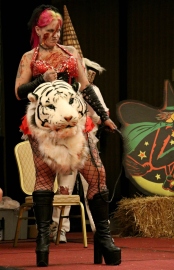 I’ve attended many a horror costume contest in my Terror Dave days I must say, I’ve never seen anyone decked out like the cross-dressing “Buffalo Bill” from Silence of the Lambs. The man definitely had the character down pat as he sashayed his way on the stage and mimicked Bill’s movements perfectly! He was so good, I half expected him to open his robe and reveal that his family jewels were jammed between his legs but, thankfully, that didn’t happen.

Here are more costumes featured at the 2017 Days of the Dead Indianapolis. Remember you can click on any image for a closer look! 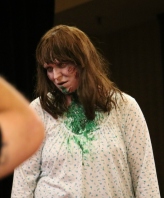 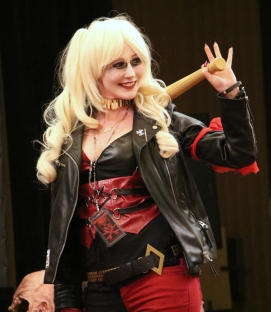 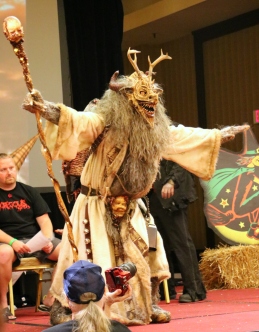 When all the contestants had left the stage, the judges chose the finalists who would be called back for a deciding vote from the audience (via applause) Correction this was the People’s Choice Award only. These included the blue civil service worker (Miss Argentina) from Beetlejuice, an awesome Creeper from Jeepers Creepers, an ogre, a gory Uncle Sam, and Buffalo Bill. 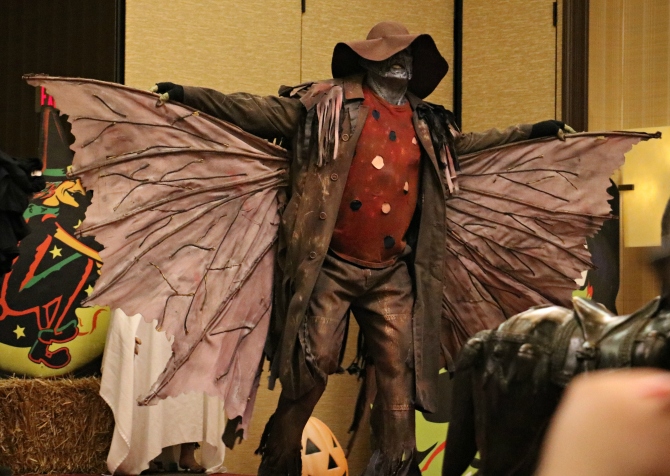 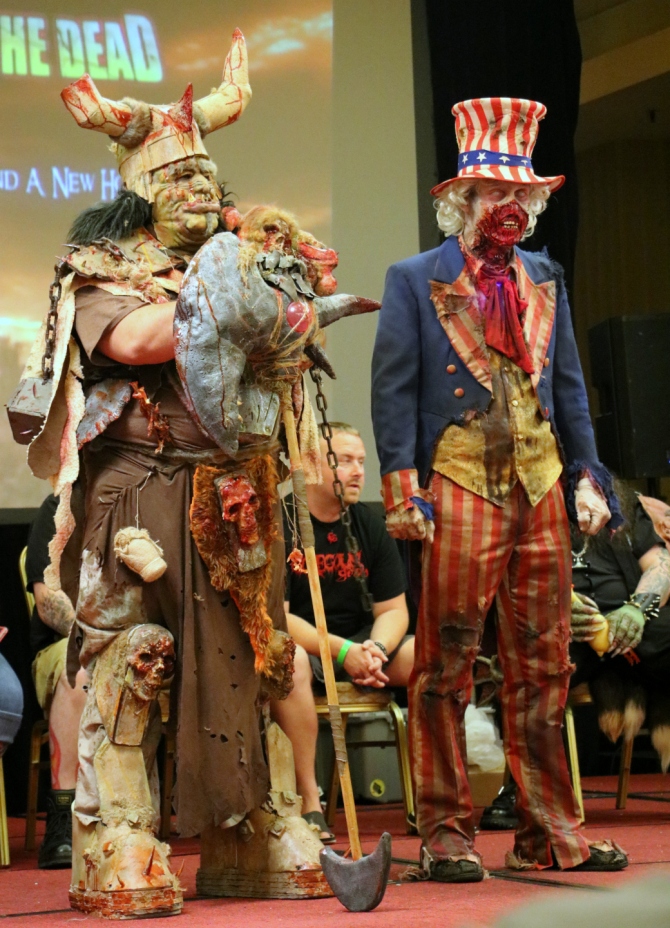 Buffalo Bill ended up taking the prize which I’m guessing was due in equal parts for his presentation as it was for his costume.

Personally, I was Team Uncle Sam and not just because we were in the midst of the Fourth of July weekend. He would later take second place in the contest with the Ogre as the big winner. All in all, it was a fun event and the perfect way to cap off our Days of the Dead Indianapolis experience. We left to get dinner and wash up before returning later that night for a screening of Plank Face. I will now hand over the Terror Dave reigns to Jason so he can review that for you…

2 thoughts on “Fans Dressed to Kill at the Indianapolis “Days of the Dead!””