On the last leg of our road trip, we stayed a couple of days in Moab, Utah where we could finally relax and get a vacation from our vacation. Naturally we still enjoyed many of the things this fun, tourist town had to offer but without having to adhere to any tight schedules or long drives. Consequently, our first afternoon there was spent lounging around the hotel, catching up on emails, going through photos, and watching AMC’s presentation of JAWS which was an exercise in futility thanks to all the commercials they smothered it with. Later we stopped in the heart of Moab for dinner at an Italian place that served the best ravioli I’d ever tasted. Up until that point, I found southwest cuisine to be rather lacking so this truly hit the spot. With renewed vigor, we drove to Arches National Park which was just ten minutes away. Next to Saguaro, this would be our favorite national treasure and we loved the fact that it was open 24 hours. We spent the evening checking out all the lookout points before watching the sunset. 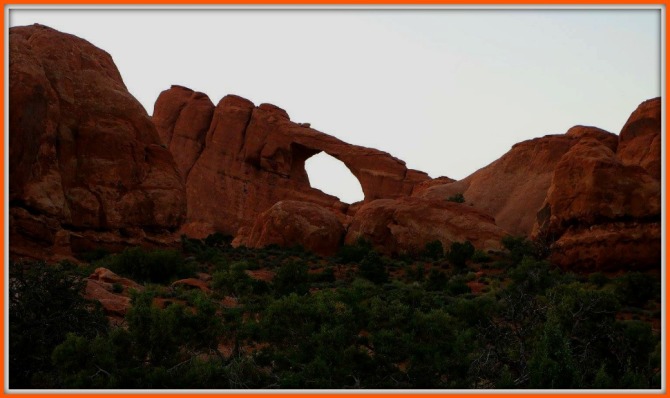 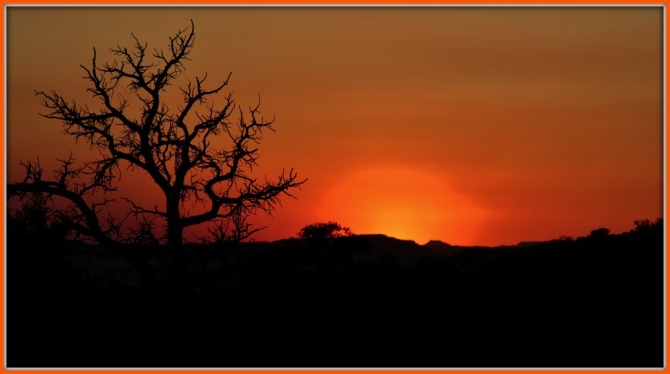 There’s so much light pollution in Chicago, the southwest was like seeing the night sky for the very first time. We decided to stargaze at one of the park’s designated stops, Panorama Point. So there we were amid a bunch of young couples making out on their cars while we’re running around hoping to spot UFO’s.

The next morning we visited a relatively new attraction called Moab Giants: Paleo Safari. It just opened last year and I’m thinking it was Moab’s clever way of giving bored, vacationing kids something to enjoy when the natural wonders that drew their parents here lost its allure. Lucky for us adult/kids we were able to enjoy both worlds and this was one of the best dinosaur attractions we’d ever seen! In addition to museums, we both love those animatronic dinosaurs many zoos feature during seasonal months. My Brookfield Zoo will be doing their third one next summer but I’ve seen the dino exhibits at the North Carolina Zoo, Milwaukee County Zoo, and Franklin Park Zoo in Massachusetts as well. Take it from me, the best ones offer realistic surroundings to enhance the overall presentation. Although these dinosaurs didn’t move nor make sounds, the stunning Moab landscape more than made up for it!

We walked in and discovered we pretty much had the entire place to ourselves. I’m sure the mid morning temps slowly creeping into the triple digits may have something to do with it. We bought our tickets and they offered a 3D video presentation for an extra $5 but we passed on it. We were far too eager to begin their ½ mile loop trail which boasted over a hundred lifelike dinosaurs! 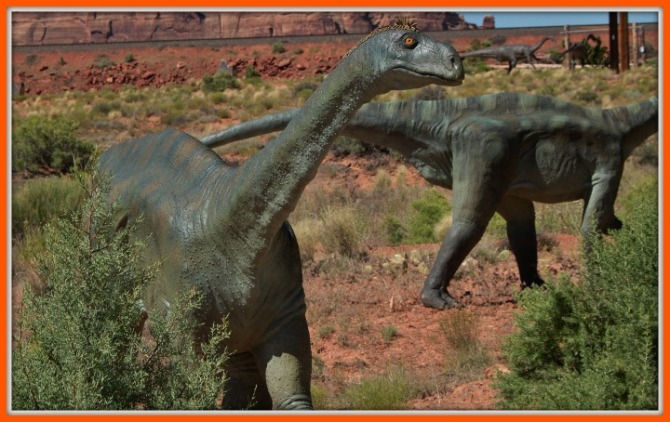 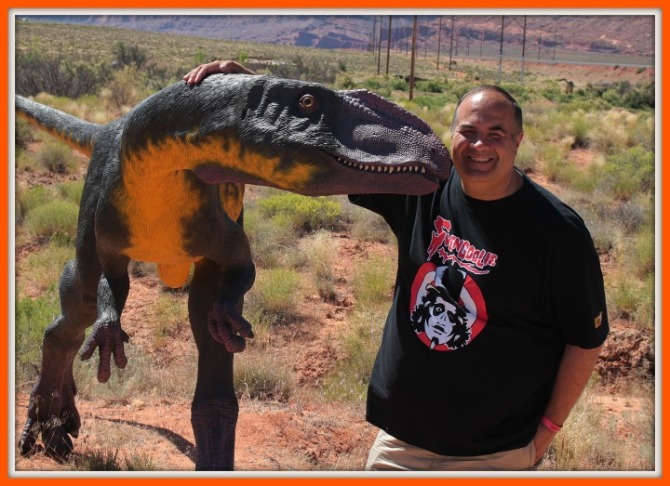 The trail was divided into four parts representing the three major dinosaur periods; Triassic, Jurassic, and Cretaceous (the Cretaceous was divided further into “early” and “late”). Dinosaurs were their most impressive during the Jurassic period when enormous long-necks (sauropods) roamed the earth. I absolutely loved how this attraction had the space to create life-sized replicas of these types of animals and in family groups. All I could think of was how I wished they had a place like this when my two dinosaur-obsessed sons were growing up. If it weren’t for the electric lines in the background, you honestly could see yourself in their world. 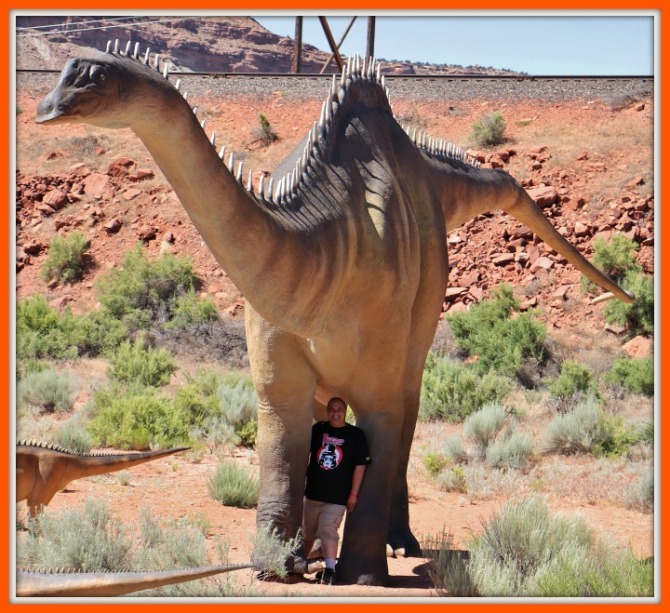 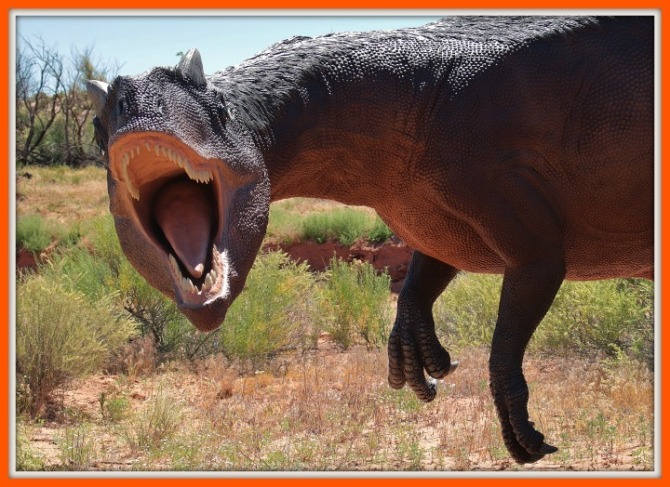 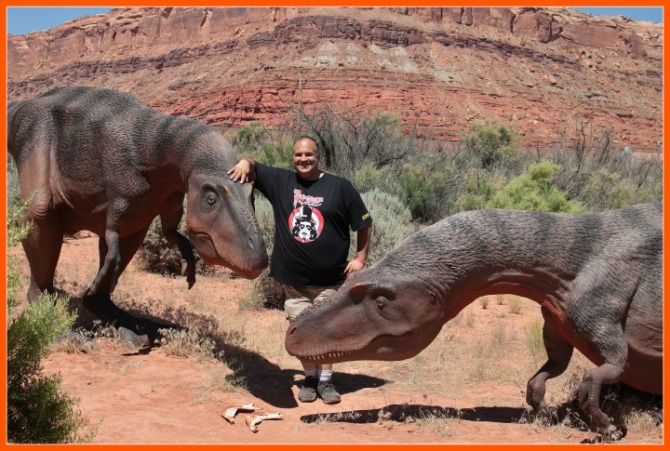 Then we got to the last dinosaur featured on the trail, T-Rex, and things fell a bit short (figuratively speaking). Aside from the fact that the male’s testicles were large enough for him to trip over, they placed its eyes more in front which didn’t quite look right. I honestly don’t know the science behind this so for all I know it might be accurate but, if it is, then it’s this forty-five-year-old guy’s equivalent of learning there’s no such thing as Santa! 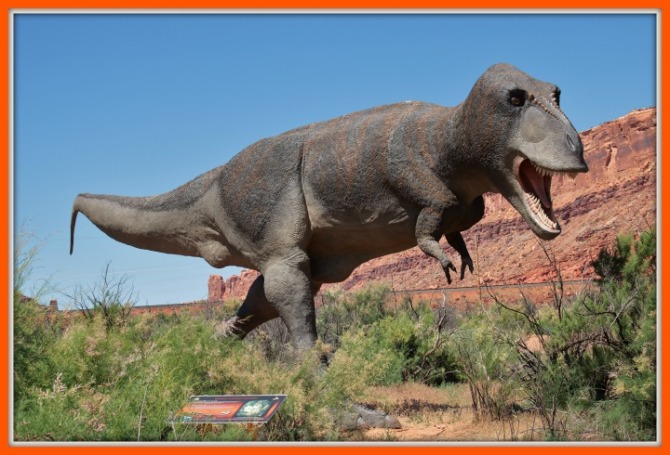 Before leaving we stopped at their museum located near the park’s entrance. It was nice (and more importantly, air-conditioned) but pretty anti-climactic next to the outside stuff. It also featured a feathered dinosaur that looked like a cross between Velociraptor and 1957’s The Giant Claw.

We went back to our hotel to cool off and then, after the temperatures became more forgiving, returned to downtown Moab for dinner (this time a ’50s style Diner) and then peruse the shops.

A frozen yogurt place that somehow got our attention.

Our favorite was the Moab Rock Shop. It was like the geologist’s answer to Walmart and had all kinds of rocks, gems, and fossils; reasonably priced. I bought some Megalodon teeth for my sons and a Jade necklace stone for my daughter (named Jade) while David splurged on a really neat Trilobite fossil. 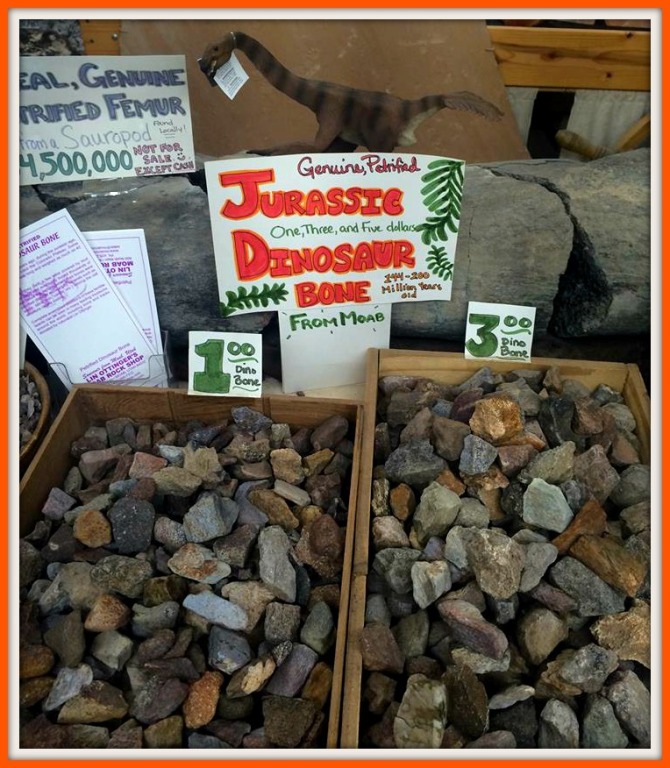 After Moab we needed to take a six hour journey back to Colorado. I desperately searched for more dinosaur attractions to break up the long drive and, as fate should have it, there was a perfect place just an hour in. 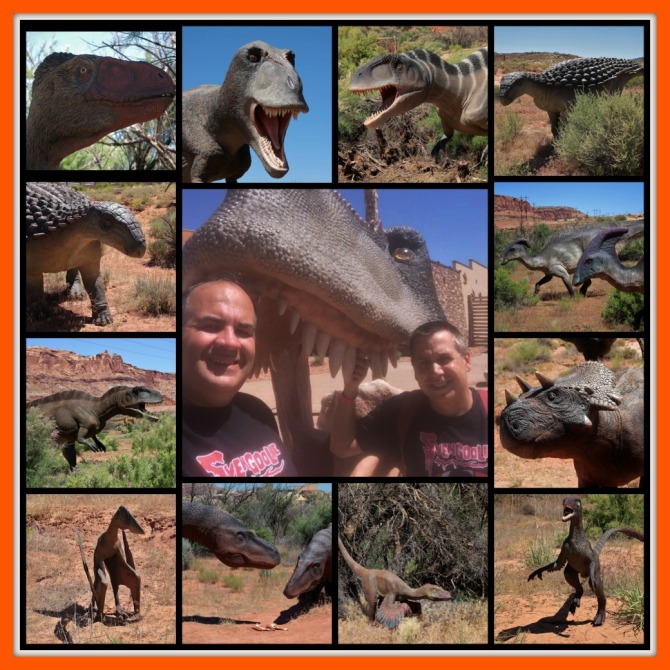