Three years ago I wrote a fan piece on the 1993 alien abduction thriller, Fire in the Sky. The film was based on what was labeled a “true story” and based on the account of Travis Walton who, after disappearing for five days, claimed to have been abducted by aliens. We Daves like to keep an open mind and are fans of the film due it’s credible handling of the material and convincing performances from a stellar cast that included Robert Patrick and the late James Garner. The role of Travis Walton was played by D.B. Sweeney who was one of the featured guests at this year’s Days of the Dead Chicago. The 54 year old Sweeney has remained active in Hollywood as an actor/writer/producer and also doing voice overs for Oprah’s OWN Network. He’ll also play the Mayor of Chicago in Spike Lee’s controversial Chiraq opening in theaters this weekend.

In preparation for this meeting, I brought along a plastic alien figure I’d purchased at a party store a few years back. A couple of these were also used during a photo op I did with Gillian Anderson and seemed appropriate for Sweeney as well. 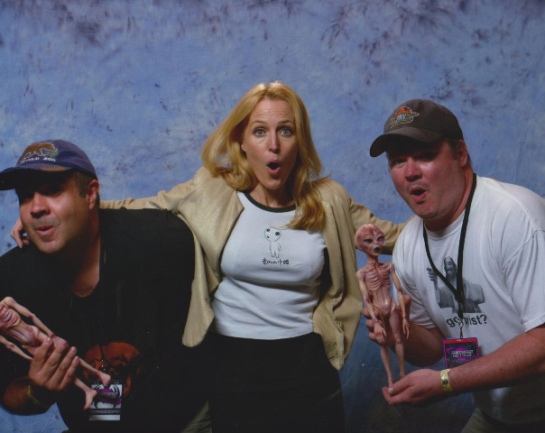 With Gillian Anderson in 2013

Sweeney was alone when I arrived which meant we had time to chat a bit. He was very friendly and extended his hand saying, “Hi, I’m D.B. Sweeney!” (I guess in case I missed the giant sign with is name on it hanging behind him). I returned the greeting while also telling him how much I enjoyed his performance in Fire in the Sky. I asked him what it was like working with the great James Garner and he said it was “amazing,” while adding how much of a pro he was.

Sweeney signed my alien figure though neither of us could think of a line from the movie that would fit with it. 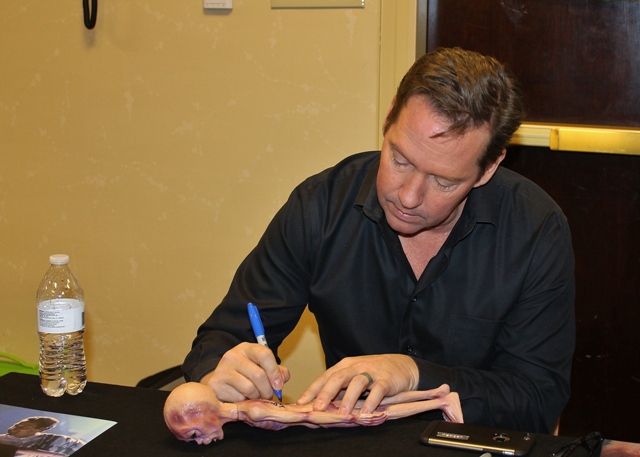 Since nobody was behind me he grabbed his cell and looked for quotes on IMDB before coming up with something about getting anesthetics (???). It wasn’t until I was driving home that I wanted to smack myself for not having him write a better quote like, “They won’t be back, I don’t think they like me” or just about ANYTHING else.

Checking his phone for quotes 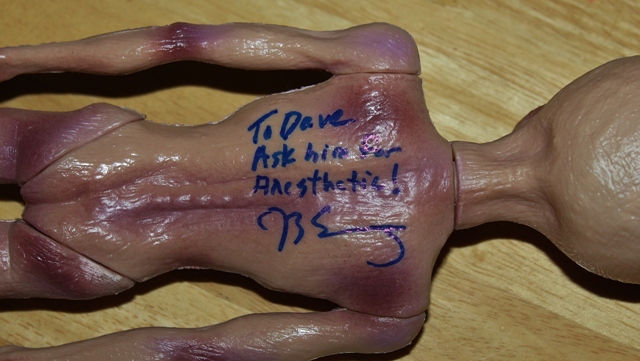 Sweeney’s autograph fee also included a photo and I asked if he’d be willing to act terrified of the alien he’d just signed. Later, after I uploaded the photo, it became pretty obvious that his definition of looking “terrified” was a lot different than mine…

Before leaving I had just one more question I wanted to ask; did he believe that Travis Walton’s story of alien abduction was true?

“I absolutely do,” he said confidently. “He never got rich off it and had no reason to lie. I met him while filming and he came across as an honest man.”

Having met Sweeney it was time to get in line for the next guest, Elvira Mistress of the Dark! I’d met her a few times before but this time was a bit different. It’s a bit of a story and, for a horror host fan like me, a surreal one at that.  I’d been chosen to bring her a personal message and gifts from the nation’s current reigning national TV host, Svengoolie!

Coming up…A Svengoolie Ambassador to the Mistress of the Dark!