The official Rich Koz Svengoolie Day  for both the State of Illinois as well as the City of Chicago took place just two days ago; October 31, 2014. Halloween is always a busy day for the horror host on any given year but, in lieu of its unique circumstances, this one was particularly demanding. With a schedule loaded with numerous activities at various different locations, the Svengoolie camp had enough on their plates without having a fanboy like myself tagging along. Therefore we Terror Daves were VERY fortunate to have the whole day archived by Sven’s assistant, and our friend, Jim Roche, who granted us permission to share them with you.

As you’re going through these photos, try and remember that this was all taken on a SINGLE day! Of course this wasn’t just any day…it was Svengoolie Day!

First up was an appearance on the WCIU weekday, You & Me This Morning  show with Melissa Forman and Jeanne Sparrow.

The ladies honored the host by dressing up as female versions of him. The real Svengoolie entered the stage during the show’s eight o’clock hour to discuss the day’s honor while exchanging humorous banter. When asked what he thought of their new looks Sven responded, “It’s kind of like looking in the mirror when you’re inebriated.” On a more serious note, he spoke of how touched he was that his character “means so much to so many people.” Take it from one who’s observed him interacting with fans at numerous appearances for the past ten years…it means something to a LOT of people! 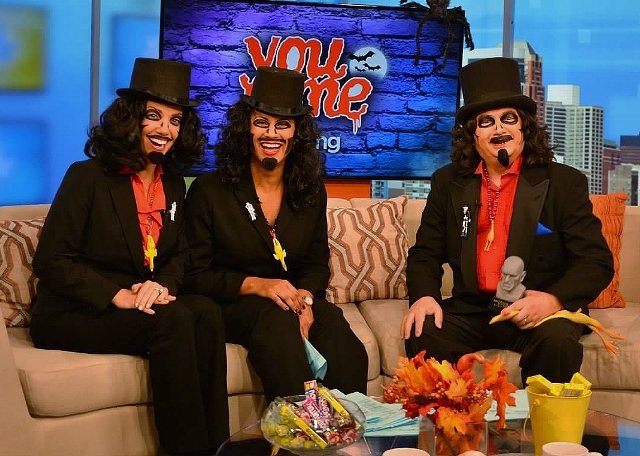 Showing off his third Rondo Award for “Favorite Horror Host “

Next they headed over to the show’s kitchen set to show viewers how to make “Twinkie Mummies” or, as Sven described them, “critically injured Twinkies.” I have to admit, Sven had me laughing throughout this appearance. 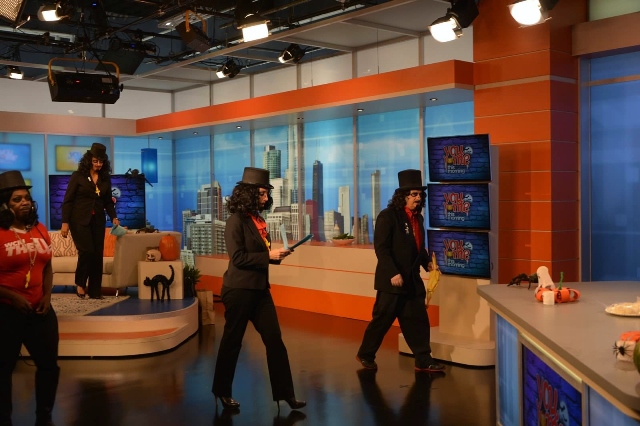 The show concluded with a visit from “ghouls, goblins, and zombies” featured at a haunted attraction in Melrose Park called “13th Floor.” One of the monsters seemed to take a particular interest in Svengoolie’s hair…which was a little strange. 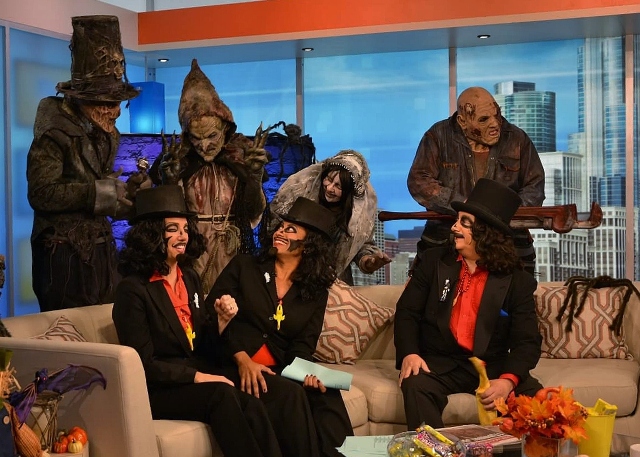 Before leaving the station, Sven stopped to get photos with fellow crew members who dressed for the holiday. First up was You & Me This Morning’s Aly Bockler who does the “On the Block” segments for the show. She was dressed as Dolly Parton which I thought suited her quite well for two reasons. No, no…not those two reasons, I meant how they both have bubbly personalities and are extremely likeable. Of course the obvious joke wasn’t lost on Bockler who’d gone outside the studio to interview people; something she described as her way of  “busting out.” 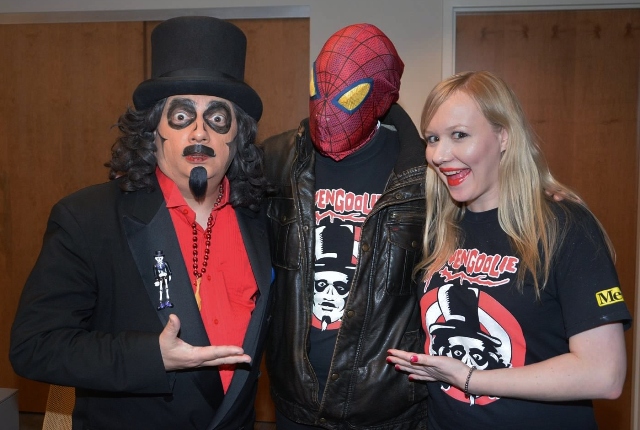 Ironically…around the time the above picture was taken, the REAL Luke Skywalker, Mark Hamill, Tweeted Svengoolie & I (I’m still in shock over being included in that Tweet) a photo of him wearing his Svengoolie shirt outside of  Pinewood Studios in England…a.k.a. the set of STAR WARS Episode VII! My youth was defined by both Svengoolie and STAR WARS so it’s incredibly surreal to see those worlds come together of late. Needless to say, aside from having to take my poor kids Trick-or-Treating in the middle of a sleet-storm, the State having officially made this Svengoolie Day, coupled with the Mark Hamill Tweet, makes this the best Halloween ever! Hamill looked amazing and when he later asked me if I’d received the photo I told him he looked like he just stepped off the set of Return of the Jedi. 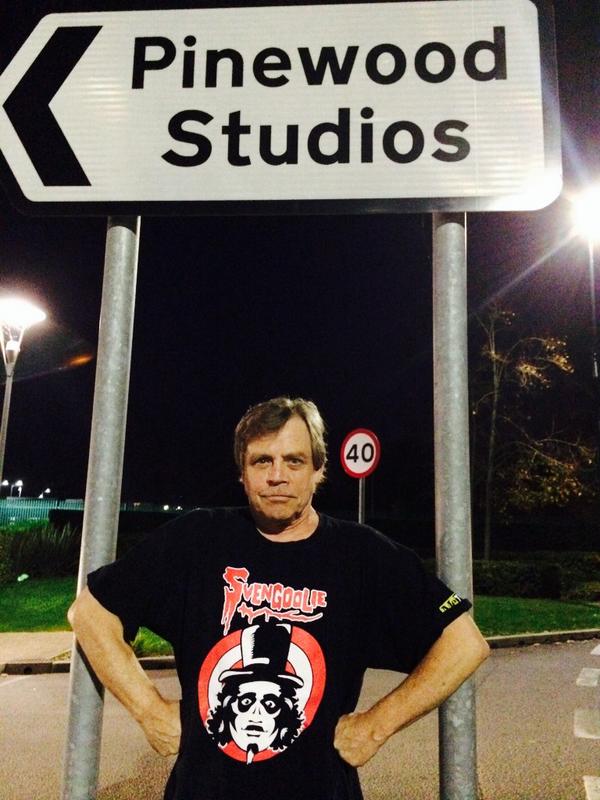 After leaving the station, Sven went to visit his friends, George and Christina Lamperis, at the “Palace Grill Sandwich Shop!” The oldest restaurant in Chicago’s West Loop, it’s a must-visit for any fan of The Blackhawks as well as those seeking the experience of great food in a vintage-style diner. On this day, lucky patrons got a true Halloween surprise as Svengoolie greeted them during their meal. 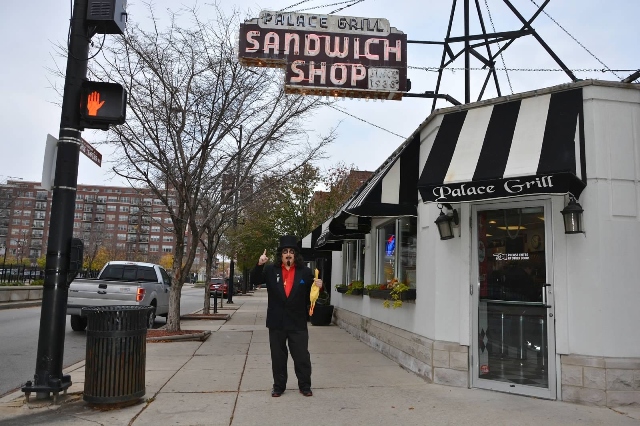 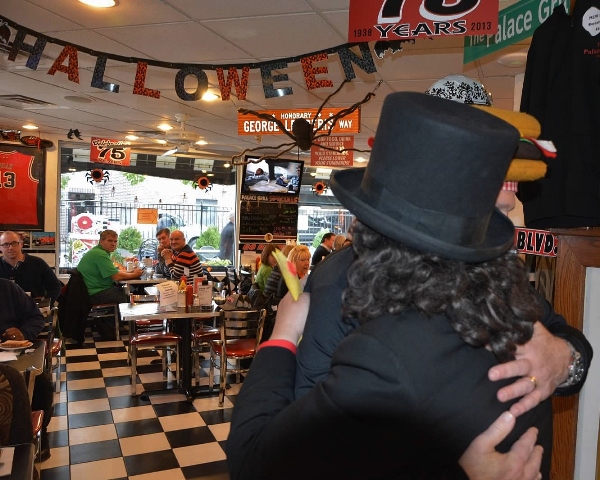 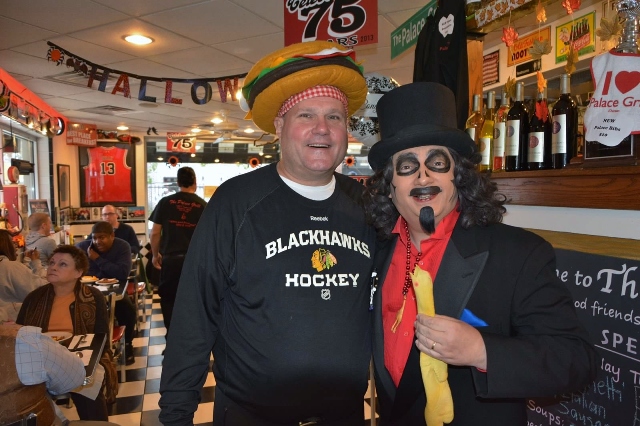 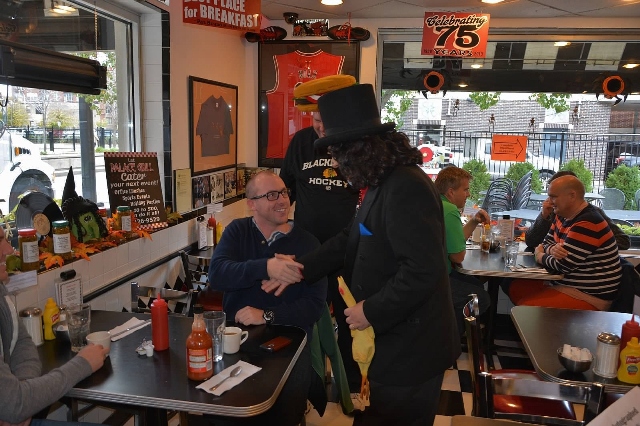 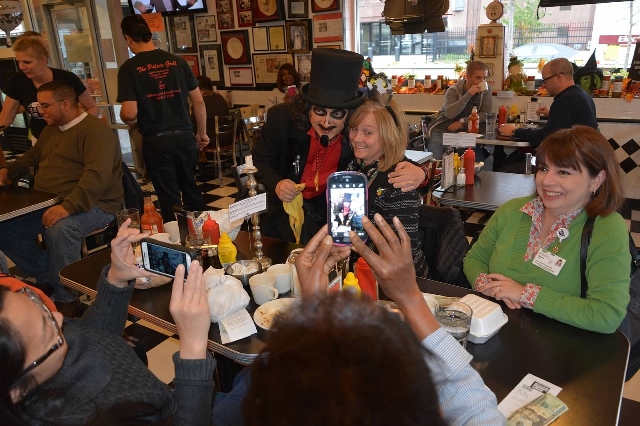 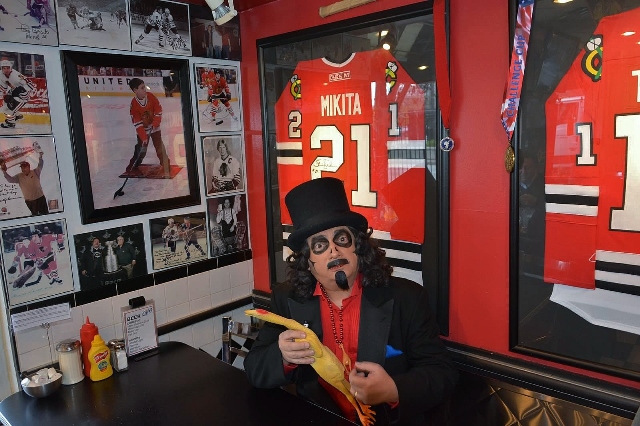 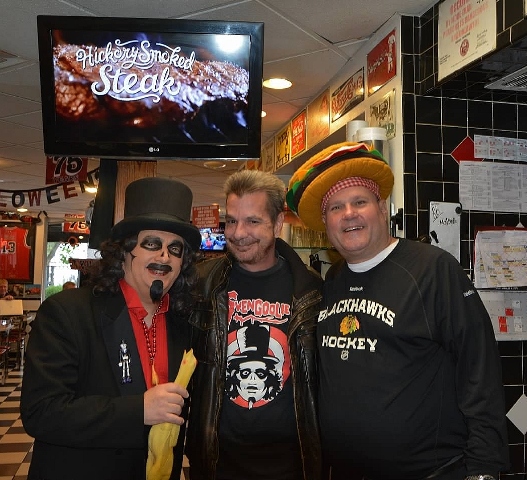 Next up was a visit to WGN Radio where Svengoolie would be a featured guest on the “Bill & Wendy Show” (he’d also done a phone interview for WBEZ Public Radio earlier) The show began with Wendy attempting to read House Resolution 1041 (which declared October 31, 2014 as Svengoolie Day) before giving up in frustration. Sven suggested they turn it into a drinking game and every time you hear “Where as,” you indulge in your favorite cocktail (from the comfort of my own home, Sven had me laughing the entire day). Bill stated that Svengoolie has “changed the complexion of horror films in the city and now the country.” His national appeal was reinforced by them mentioning the Mark Hamill Tweet from earlier. 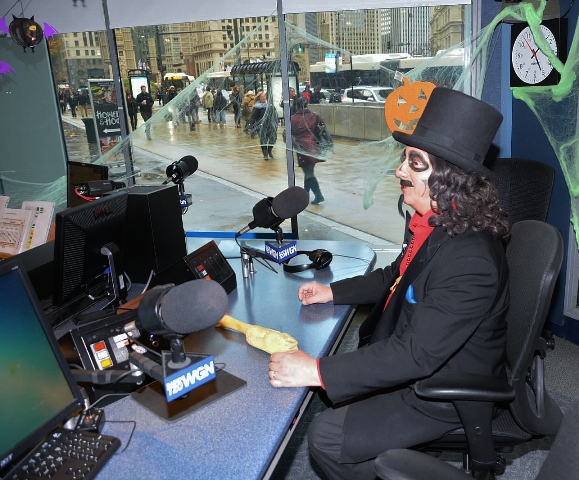 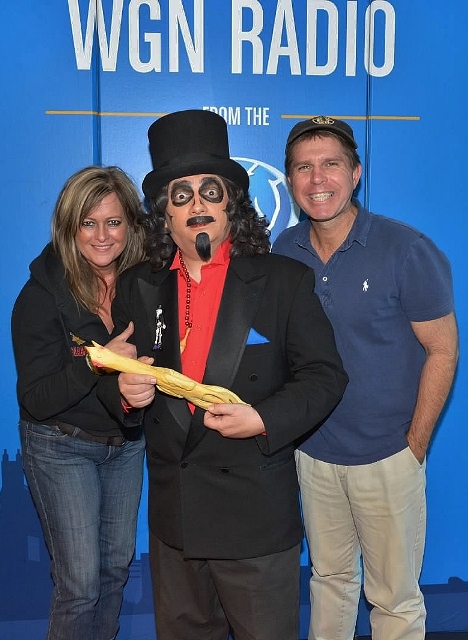 Finally,  it was off to The Chicago Bulls opening home game to sign for fans, walk around and greet people, while enjoying other fun surprises! 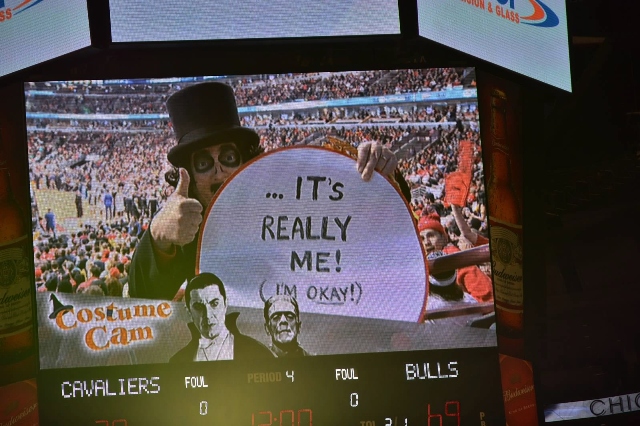 Special thanks to Jim Roche for sharing these amazing pictures! And congrats to both Jim and Svengoolie on the completion of another busy and successful Halloween season!