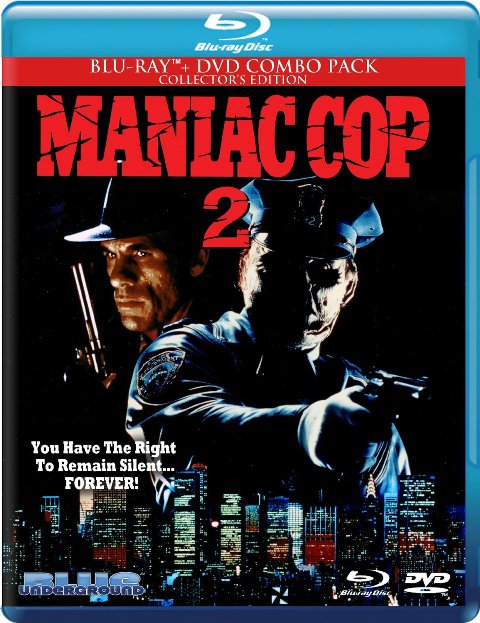 If you think its hard tracking down some of your favorite vintage horror movies, try finding their lesser known sequels! Sure we’re all familiar with the numerous Halloween and Friday the 13th films but the original Prom Night, House, Amityville Horror, and Silent Night Deadly Night (to name but a few) also spawned numerous follow ups that often got lost on the old video store shelves. Horror collectors are left in a quandary as these films are hard to come by or, in the rare event that they are re-released on DVD, are usually bland transfers often sold as double features. Thanks to the folks at Blue Underground, this is not an issue for fans of the Maniac Cop sequels. They’ve not only re-released BOTH on blu ray but with noticeable improvements!

After watching Maniac Cop on DVD I popped in the blu-ray for Maniac Cop 2. The beginning of this film (which was released a year after the first) shows one of the final scenes from part one; Officer Malden being staked and driven into the river. Although I watched them back-to-back, the upgrade was so incredibly clear it was almost like watching it again for the first time. Blue Underground did a fantastic job giving fans the optimum viewing experience!

As for the film itself, it is one of the most unique sequels you’ll ever encounter. They do bring in actors from the previous film such as Officer Forrest (Bruce Campbell) and his gal pal Officer Mallory (Laurene Landon) whose appearances, though brief, do help to provide continuity. They even bring back Robert D’Zar as the Maniac Cop but, aside from his size, you’ll be hard-pressed to recognize him.

While it was never uncommon in slasher films to see the antogonist constantly cheating death, Maniac Cop 2 goes in an entirely new direction by making theirs undead. And, seriously folks, how many killer franchises can you name that transition from slasher to zombie? 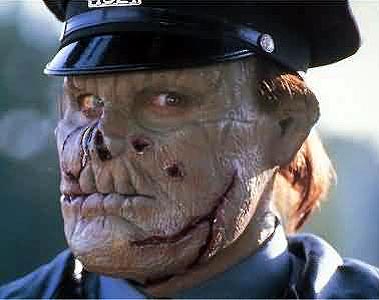 Despite not finding a body and the death of the corrupt Mayor Killium, the department continues its policy of “do NOT utter the name of Officer Matt Cordell no matter where the evidence leads.” This doesn’t sit well with Forrest and Mallory who find their appearances in this entry literally cut short.

Sequels tend to get worse as they go and it’s not like the original Maniac Cop was all that amazing in itself. This entry, however, not only stands out, it’s in many ways more memorable an entertaining…even if sometimes for the wrong reasons.

One scene in particular features police psychiatrist, Susan Riley (Claudia Christian), handcuffed to a car which the Maniac Cop promptly pushes down a hill. I can honestly say that I’ve never witnessed a car in neutral get so much traction and for so long! Regardless, the scene is only memorable, it’s a hoot! Another scene features the Maniac Cop attacking the police station; entering and leaving like the proverbial bull in a China shop. This is one movie that is not starved of action!

Actor, Leo Rossi, returns for this sequel t0o but as a completely different character. Instead of assisting the Mayor (in an unaccredited role) he’s a scuzzy rapist named Turkell who befriends the Maniac Cop; offering him shelter, not unlike the blind mine from Bride of Frankenstein.

Joining Susan on the crusade is Detective McKinney (Robert Davi) who, though having no use for the field of mental health, forms an alliance with her – yet another unlikely pairing that seems to work even better than the two heroes from the previous film.

Maniac Cop 2 is more stylish than the original and this is yet another reason why the blu-ray upgrade enhances the overall experience. This fun version is an absolute winner and worth adding to your collection. It would not, however, prove the last appearance of the Maniac Cop…

To get your copy of Maniac Cop 2, click HERE!