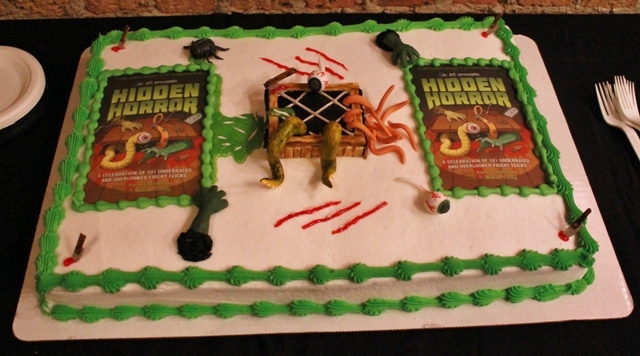 It was back in September 2012 when horror writer/actor, Aaron Christensen (“AC” for short), approached me along with 100 others asking if I was interested in participating in a follow up to his book Horror 101: The A-List of Horror Films and Monster Movies. Just as the title suggests, the book features a list of “must see” horror films; each discussed by individual writers. His latest project features another collection of essays; this time focusing on the not so famous though still worthy of attention. I was a fan of Horror 101 long before my blogging days and was VERY flattered to be considered for its sequel…thus beginning my association with Hidden Horror: A Celebration of 101 Underrated and Overlooked Fright Flicks!

After accepting AC’s offer, I looked him up on Facebook and soon realized (after finally being able to put a face with the name) that we’d bumped into each other before. I believe the first time was at the March 2012 Horrorhound Weekend in Columbus and then, later the same year, at Chicago’s G-FEST (Godzilla Festival). I remember him being very kind and attending my forum on “Horror Hosts and Godzilla” which I assume he enjoyed since he’d later refer to me as “the hilarious Dave Fuentes” during his coverage (which you can see HERE). Either that or he thought I was being intentionally funny when I erroneously referred to “Creature Features,” John Stanley, as Paul Stanley. Needless to say, it marked the last time I’d listen to KISS music before addressing the public ever again!

What I like about AC’s books is that every composition is written by someone who’s passionate about each specific film as opposed to the same author covering the gambit. It’s a savvy move as these essays are meant to be persuasive and inspire readers to go and watch the films rather than merely provide prose.  After joining the project, I was asked to choose a few under-appreciated movies that I felt warranted attention and would be willing to write about. Fortunately he approved my first choice, Dark Night of the Scarecrow, which anyone who knows me can attest as being one of my all-time favorites!

For the next several months, we worked on our individual essays under the constant guidance of AC. How that man kept track of everything amid his busy schedule I’ll never know but, having perused the finished product, one can clearly see that he not only did it, but did it superbly!

Last Sunday evening was the book’s launch party which took place at Spyner’s Pub in Chicago. I’d never attended a book launch before (least of all one I was a part of) and, despite the casual locale, thought the whole thing sounded terribly sophisticated! It’s what I love about my great city. Between occasions such as this and Wildclaw Theater, Chicago makes horror downright classy! 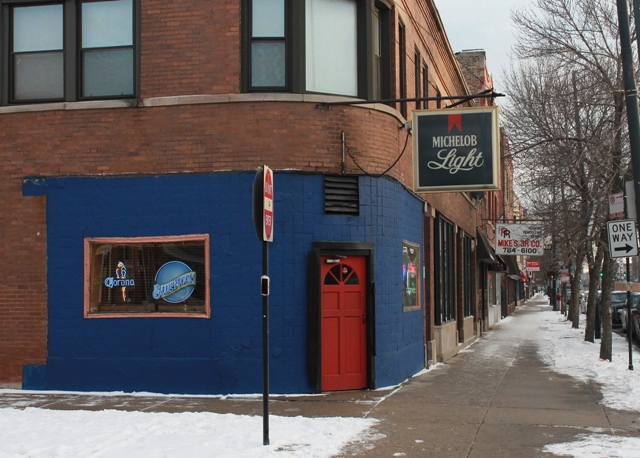 I arrived at the bar about an hour after the festivities began and no sooner walked in the door before being awestruck by all the talented men and women in attendance!

…Well, okay, it was more like the buffet table that struck me but that amazing spread would’ve gotten anyone’s attention! The goodies (a small portion of which you see below) included food from Autre Monde Café & Spirits, Spoon Thai Restaurant, and the Maddiebird Bakery! 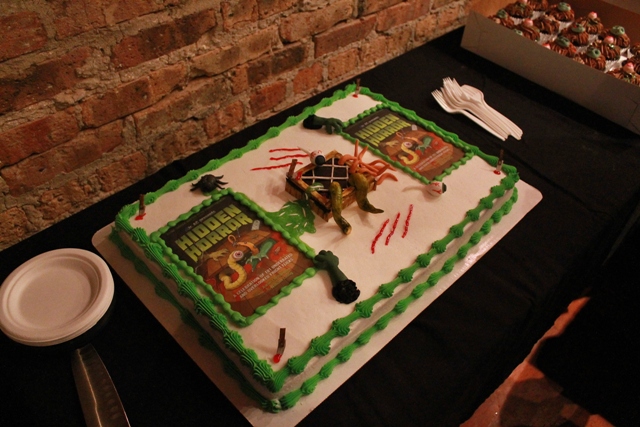 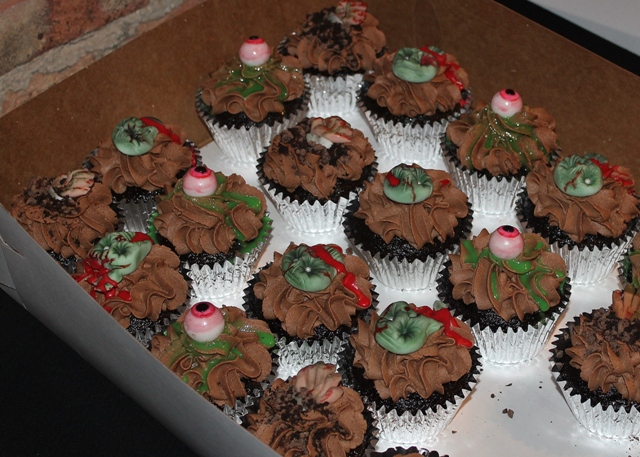 The room was full of party-goers but, after surveying the crowd, I realized I didn’t know anybody there except AC. He approached me as I was removing my coat and took me over to a table (where you could buy a copy of the book) before giving me a name tag. There were quite a few of us contributors in attendance and we were identified via a red star next to our monikers along with the title of the movie we wrote about it.

What I particularly enjoyed about this party was that it featured some notable Chicago horror aficionados whose work I’ve long appreciated…though somehow never met formally. The first of these was Jon Kitley from “Kitley’s Krypt” who spared me from awkwardness by approaching me soon after getting my tag. Kitley’s a regular contributor of Horrorhound Magazine and often has a booth at the various Midwest horror cons. I’d heard that he was a local talent through my friend, Elzabeth Haney, at Acme Design and hoped we’d eventually cross paths…tonight being the night!

We talked about some of the events we’d both attended last year and seemed to share a lot of the same views. Kitley’s website (which you can find HERE) is one of the longest running horror sites and is a wealth of knowledge. He’s also a collector and attends most horror events as a dealer; a booth that features hard to find horror books and music. I remember at my first Horrorhound Weekend in 2010 my friend, Jason, bought me an awesome Dario Argento book (among others) from him. 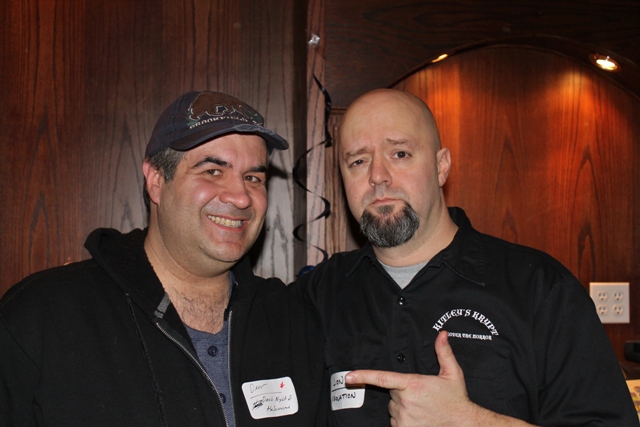 Another local personality (and I’m talking a LOT of personality) was Brian Kirst from the “Big Gay Horror Fan” blog. I’ve followed his antics for some time and noticed he and I had attended many of the same horror events too (Days of the Dead, Wildclaw Theater productions, etc). I love people who not only get the most out of their fandom but visibly have fun doing it and Brian mugs for the camera as badly as I do. He’s also quite savvy regarding obscure horror flicks.

I was having a chat with someone regarding ’80s slasher films that had a rock n roll theme. As we bounced around titles such as Black Roses, Trick or Treat, and Rock n’ Roll Nightmare I mentioned one that was a Swedish/American collaboration taking place on a snowy mountain. For some reason a band decides to film their music video there before being hacked up by a psychotic family. I could remember everything but the damn title! Thanks to the help of Brian, we managed to figure out that it was 1985’s Blood Tracks. “I’ve got that VHS tape on my shelf at home,” he said. 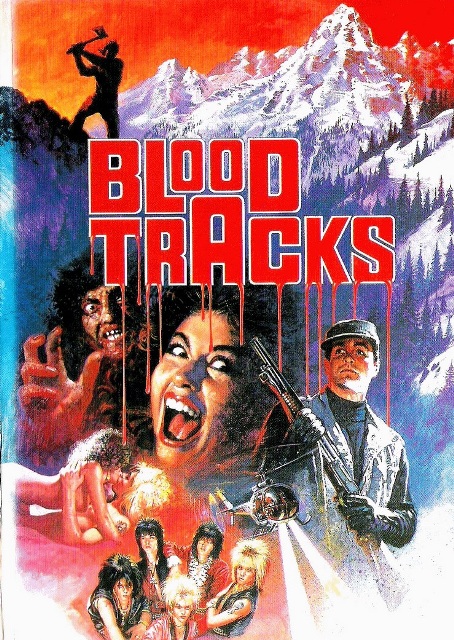 Those of us who’d contributed to the book were asked to sign copies for both guests and each other. At first this felt strange but, since everyone exchanging books and signatures, was more like yearbook signing on the last day of school as opposed to me living out a pseudo celebrity fantasy. Though I did mention to the other Dave that no matter how famous I became he could always count on obtaining my autograph for FREE!

Fawn Krisenthia signs her essay on “The Tenant”

We socialized amid the airing of 1954’s THEM playing on an overhead TV (AC obviously knows how to throw a good party) and the time flew by. I’m sure I speak for everyone in attendance that it was a lot of fun too!

Yep, I could definitely get used to attending book launch parties. Now if I could just land a cameo in some local, independent feature then perhaps I could live out my Red Carpet fantasies too. In terms of “what are they wearing,” Wal-Mart’s Big & Tall line could sure use the exposure!

Be sure to grab your copy of Hidden Horror: A Celebration of 101 Underrated and Overlooked Fright Flicks by clicking HERE!

If you don’t have a copy of its predecessor, Horror 101: The A-List of Horror Films and Monster Movies, you can get a copy of that one HERE.

You can purchase BOTH books together for under $40 which is a small price to pay when considering the wealth of horror knowledge they offer! Terror Dave Albaugh has a copy headed his way and will be providing a formal review very soon. We felt this was the best course of action in providing you, our cherished readers, the fair appraisal you so richly deserve! (Message to David Albaugh: screw up my horror book debut with a crappy review and I break one of your legs!) I’d also like to thank AC for including me in this wonderful project. You’re the best, Mr. Christensen! Paul Stanley would be so proud!