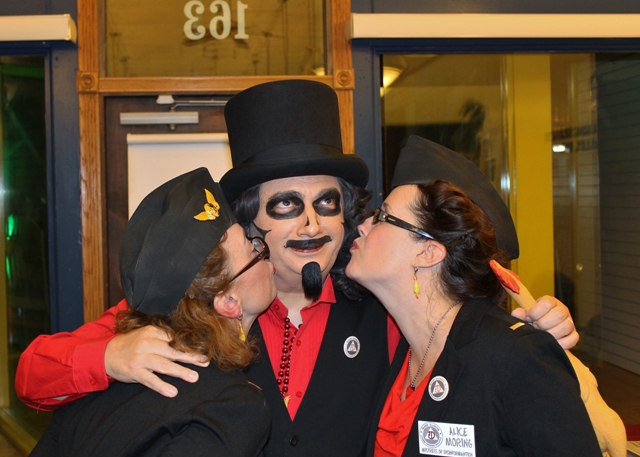 Shortly after Svengoolie had finished being interviewed by some local students of Elgin, I headed to the back room to say hello. There wasn’t enough time to corral Nightmare on Chicago Street’s most influential women, Elizabeth Haney and Alice Moring. for a picture but I did make sure it happened afterwards…lest they regret issuing me my press pass. 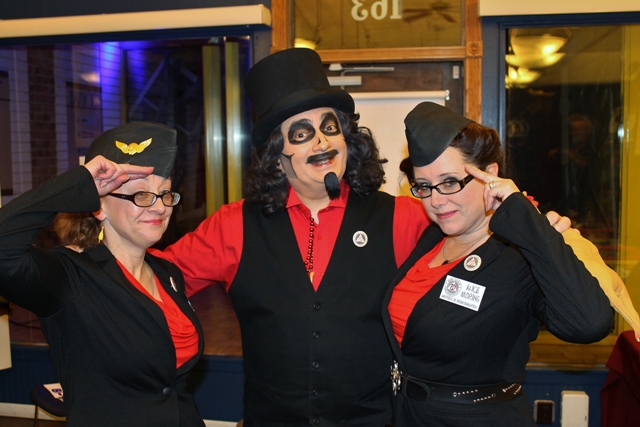 I went outside to survey the line of fans awaiting their chance to meet Sven and it seemed to go over a city block.

Fans brave the cold to await a meeting with Svengoolie!

I said hello to some of my fellow Goolies before returning inside to report the turn out. “Alright, let’s do this,” said Jim. And the doors opened…

First in line was my friend, Larry Lang (I love this guy’s name because it’s like a supporting character in a Superman comic). I’d first met him at last year’s event and he’s not only one of the nicest guys around but a talented one at that. Like last year he brought along his latest “Svengoolie Pumpkin Patch” poster which features the host standing amid a bevy of pumpkins carved with images associated with his program. He’d already shared his new one with me online but it had since received some minor adjustments. “I’m like George Lucas,” says Larry, “I’m always updating my original.”

With the talented Larry Lang

He pointed out the changes before handing me a surprise of my own. It was a full poster of a Terror from Beyond Daves & Svengoolie Pumpkin Patch which looked amazing. We’d already been using the image (with both his and Sven’s permission) for our October banner and I was so grateful for him not only taking the time to create something like this but also go to the expense and trouble of having it printed out into a full-sized poster! My Svengoolie gallery is growing by leaps and bounds these days…and I couldn’t be happier about it!

As for Larry’s Svengoolie Pumpkin Patch, it would later be featured in a future mail segment on the show (ironically, one I was included in as well).

Larry had his poster signed and left to enjoy the rest of the festivities. About 20 minutes later I saw a woman walk in carrying an 8×10 with a familiar image – none other than Larry’s latest Svengoolie pumpkin patch. “Oh, did you get that from Larry?” I asked. “He was just here.”

It turned out, she had no idea who Larry Lang was and had purchased this photo from a nefarious eBayer who’d obviously printed it from our site (due to the poor quality of having it expanded to an 8×10 format as well as the fact that it wasn’t anywhere else on-line). This attracted the attention of the Svengoolie camp who were none too pleased by the discovery of someone profiting off the image of Sven. It reminded me of his 2012 C2E2 when Jim put the kibosh on someone selling posters of Svengoolie posing with Chicago’s latest Bozo the Clown.

The woman’s name was Vicki and she happily pulled up the sale on her cell phone so we could all take a look. The original auction had both the picture as well as one of Svengoolie’s latest “Chicken Thrower” T-shirts selling at a considerably inflated cost from what you’d pay on Sven’s site direct (and while we’re at it, go ahead and order yours at svengoolie.com). Further investigation revealed the seller lived in Rhode Island prompting Jim to look up at me.

“It’s not David Albaugh,” I assured him. Though the other Terror Dave does indeed reside in the small state of Rhode Island, I knew that a) he would never do something like this and b) if he did do something like that he’d have access to the full pixel image and could have produced a WAY better quality picture! Looking at the auction description got even more interesting by the discovery of the seller using pictures of me catching a rubber chicken with Svengoolie during his appearance at a 2012 Joliet Slammers game (story HERE but please don’t sell the pictures).

So let’s review…we get someone stealing my friends’ picture, profiting off of Sven’s image, and using my photos to enhance the sale’s pitch. NICE!!! Please people, we all love Svengoolie, but unless it’s being purchased off of his site or you have his permission direct, please do not buy any Sven stuff on eBay. Oh, I also love elephants so don’t purchase anything made of ivory either.

Okay, now back to our scheduled program… 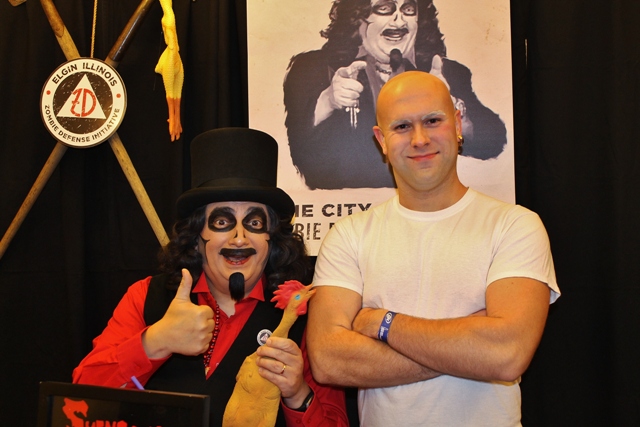 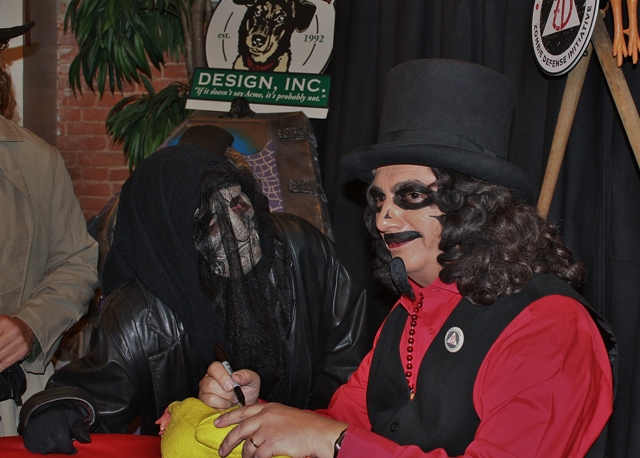 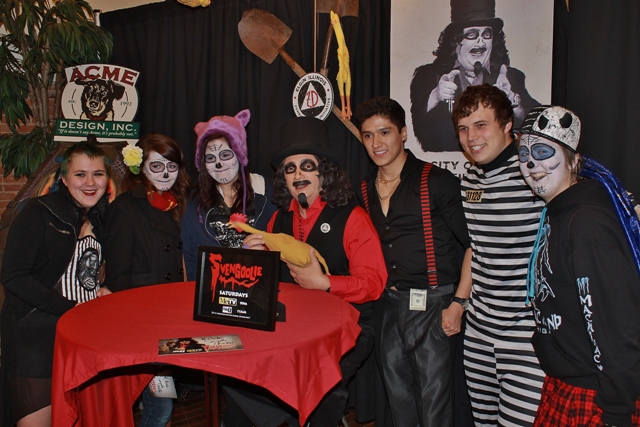 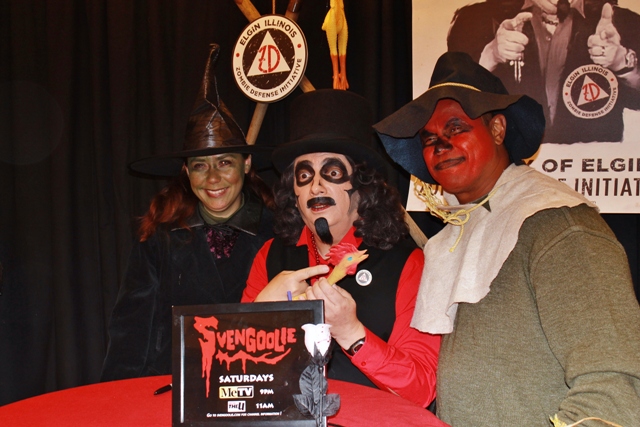 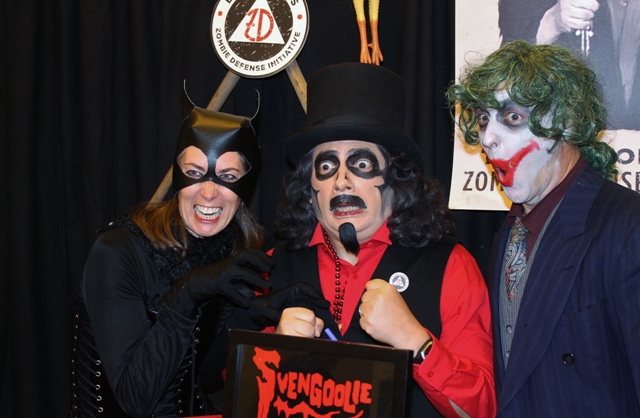 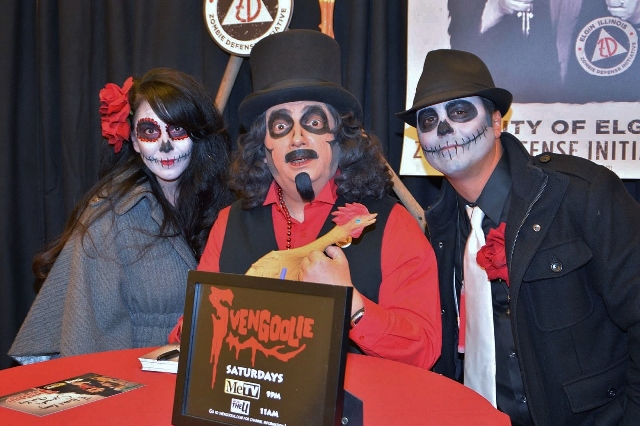 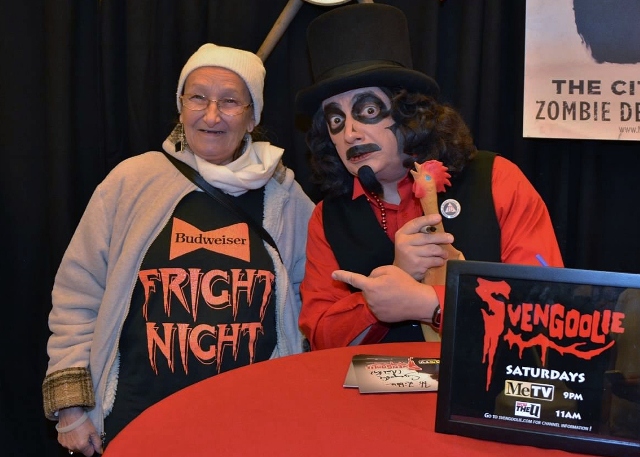 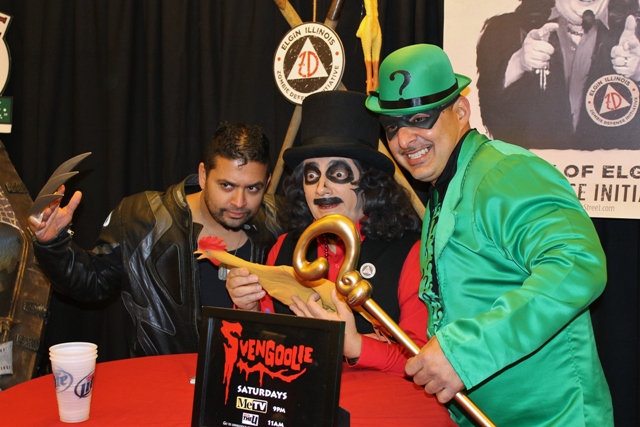 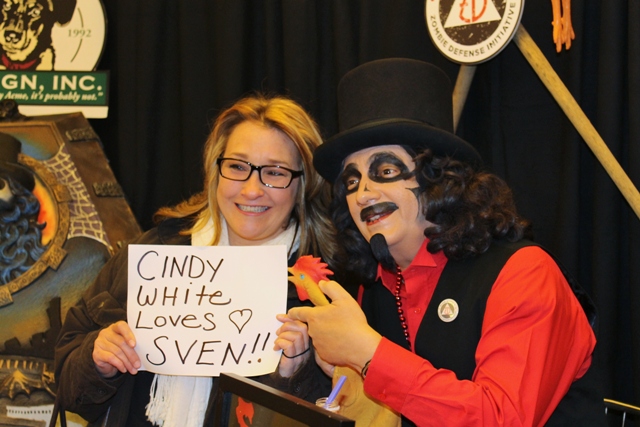 It was also a nice surprise seeing my friend, Bill Yingst, who has continued Joan, his late wife’s, legacy of Svengoolie fandom by bringing along his son, Jeremy! Joan was a dear friend and someone I miss every day – especially at Sven signings. I know she’d be proud of seeing Bill carry on the Sven torch in her honor. 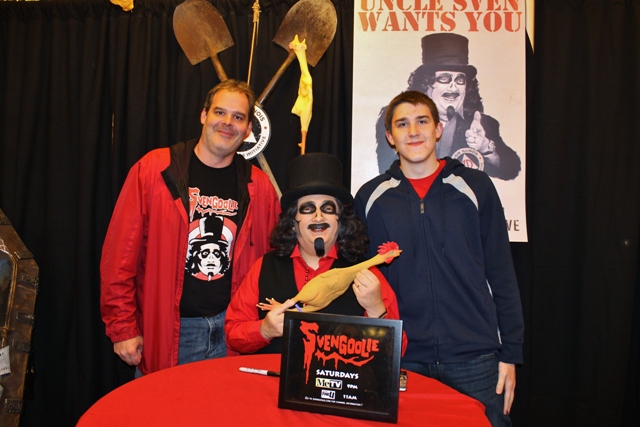 The turn out was huge but Svengoolie needed to be on time for the costume contest, resulting in the line needing to be cut. This didn’t sit well with one inebriated visitor who, just before the doors shut, yelled inside, “Didn’t you already DIE!?” This tasteless comment was obviously made with her confusing Rich Koz with the original Svengoolie, Jerry G. Bishop who had passed away the month before. As if that wasn’t enough, she made matters worse by then pressing her bare, cottage-cheese butt up against the window to moon him. Jim immediately snapped a photo. “Figures that’s the first thing you’d think of!” said someone near by. “No,” replied Jim, “I just wanted to show this to the nice police man standing right there.

With Dr. WHO make up artist, Claire Ramsey. (photo courtesy of Jim Roche)

With little time to spare, Sven and the judges were whisked off in a golf cart while Elizabeth, Jim and I navigated the crowd. Our destination was near the main stage where they’d be briefed on how the contest was to be handled. 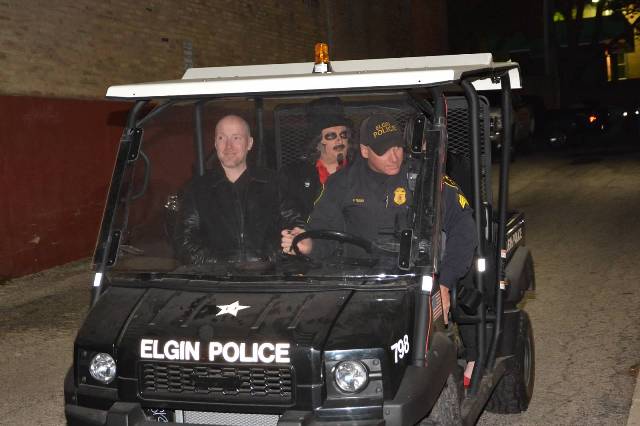 When the moment arrived, we all headed behind the stage before Svengoolie made his way up. “Where do you want me to stand?” I asked Elizabeth.

She didn’t skip a beat. “Right up there behind Svengoolie.” 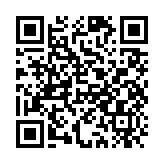