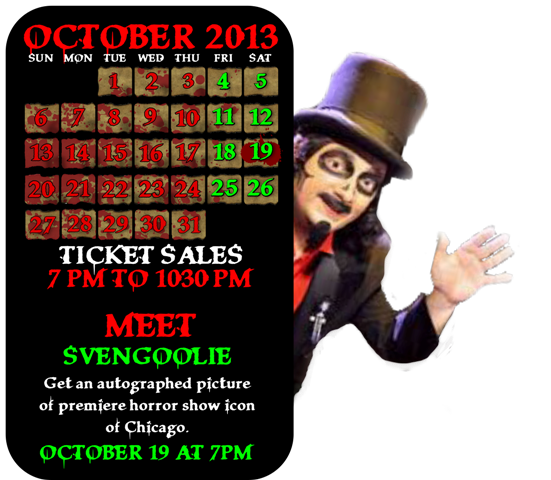 The last time I’d been to the Santa’s Village theme park (located over an hour north of me in Dundee, Illinois) I was about five years old. To be honest, I don’t remember much about that visit and didn’t even know the place still existed. That was until my recent visit to the Volo Auto Museum where Svengoolie’s assistant, Jim Roche, mentioned it as a stop during the host’s numerous Halloween season of appearances. Needless to say, I immediately gave it a high Terror Dave priority…if for no other reason the novelty of it.

It was a chilly October evening when I picked up the youngest three of my five kids (my nine year old son and two teen daughters) and began our journey to Santa’s Village. I believe we made it about five miles before it started raining which wasn’t making my daughters any happier about this whole excursion. I knew it was an issue when I announced where we were going and was met with utter silence amid the glow of them texting their friends. I’m guessing those messages were somewhere along the lines of, “My Dad is planning on torturing us!”

We made the most of the trip by listening to one of my Halloween CD’s (at least they haven’t outgrown that) while I shared ghost stories of my great grandmother’s old house (which even my cynical father will admit was haunted). We’d just finished rocking out to the “Monster Mash” before arriving at our destination.

At first glance, I noticed the park was much smaller than our nearest Six Flags Great America and, just as the name implied, had a Christmas theme. The ticket window looked like a winter cottage with fake icicles hanging off of it…along with a spider web and super-sized arachnid nearby. Let me say that Christmas and Halloween go about as well together as Thanksgiving and pizza! I suddenly felt like I was at my local Wal-Mart  – another place that has no problem mixing up the holidays as they chug out all their Christmas merchandise by October 1st.

After purchasing tickets, we made our way through the gift shop. Santa’s Village experienced a change of management since I was a kid and now fashions itself a “Azoosment Park.” The zoo part of this equation is a collection of animals that range from domestic to exotic and guests are able to get close to. This always leaves me with mixed emotions as I volunteer at an AZA (American Zoo & Aquarium) zoo and am leery of places that offer animal encounters without accreditation. As far as their store was concerned, however, it was every bit the same as a zoo gift shop with lots of animal related merchandise amid a collection of Christmas ornaments.

After exiting the shop, we found ourselves in the park which had a collection of shops (mostly serving ice cream which was about the last thing anybody wanted on this chilly night) as well as small rides. 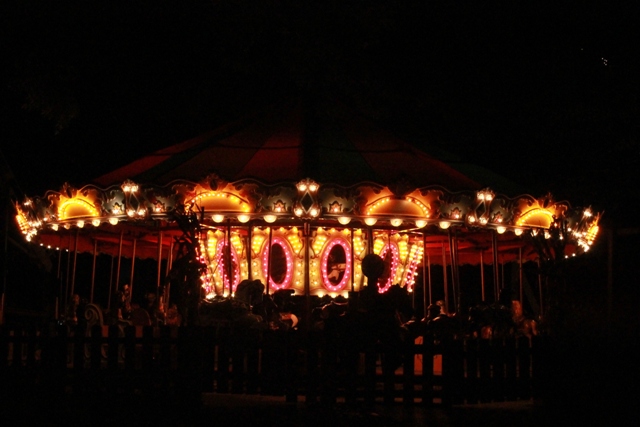 I was trying to determine where Svengoolie was when I spied a long line wrapping itself around the carousel. I had no doubt that following this line would lead us directly to the host and I was right 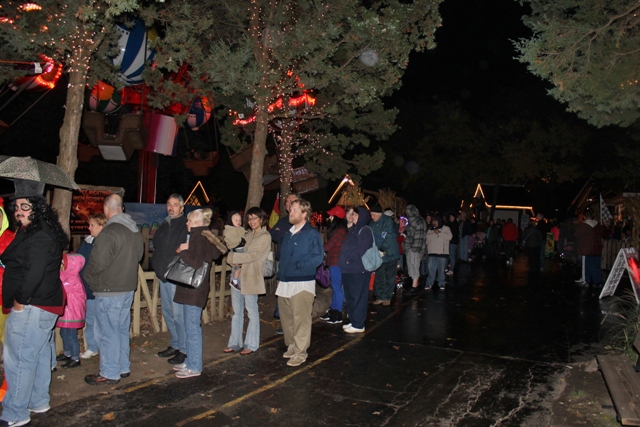 The line to see Svengoolie

The kids took their place in line and I headed over to snap some pictures of Sven. I saw his assistant, Jim Roche, and said “hello.” Sven was signing underneath a tent which offered him protection from the rain if not the cold. I surveyed the line in the hopes of finding any interesting looking fans. The only colorful ones were just about to meet him and consisted of a guy dressed up as the host with his gal pal as a rubber chicken. 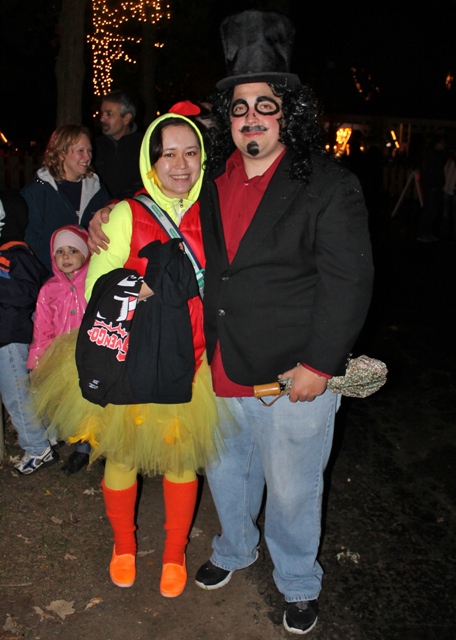 Then I started slowly walking past the line of fans while casually checking everyone out for possible honorable mentions. Nothing really stood out except for three wet and rather unhappy kids who turned out to be mine. I told my daughters to hold the spot while I walked my youngest around the park. They had some whimsical looking eye candy such as giant mushrooms and some sort of a cow that I thought was also plastic until I got closer to it and it turned its head and looked at me…thus providing me with my first legitimate jump/scare this Halloween season. 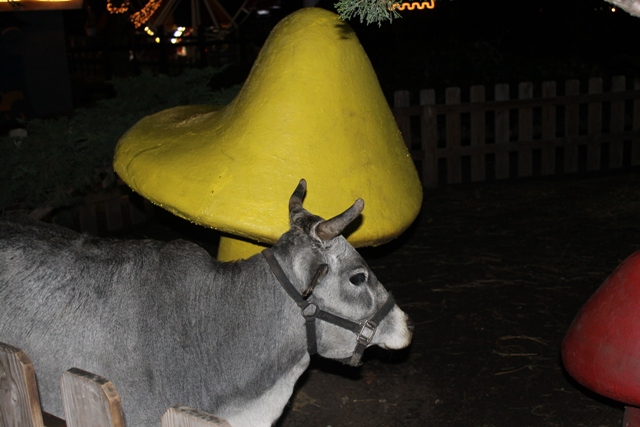 It had horns so I assumed it was a male until a small calf came out of the darkness and started nursing. That’s the thing about being at a zoo all the time…I can tell the difference between a hyena and an African painted dog but domesticated livestock leaves me clueless. I patted its cold, wet head and wished I could of broken them out of that pen and walked them under the tent with Svengoolie for shelter.

In keeping with the Halloween theme, there was this guy dressed as a ghoul that would walk up and down Sven’s line in an attempt to scare people. While most of the guests found it amusing it caused a small girl visiting to just about lose her mind. That girl screamed so loud she could have been an extra in William Castle’s The Tingler! Her parents thought it was a riot and this encouraged the ghoul to not only continue menacing her but actually follow her for a bit. 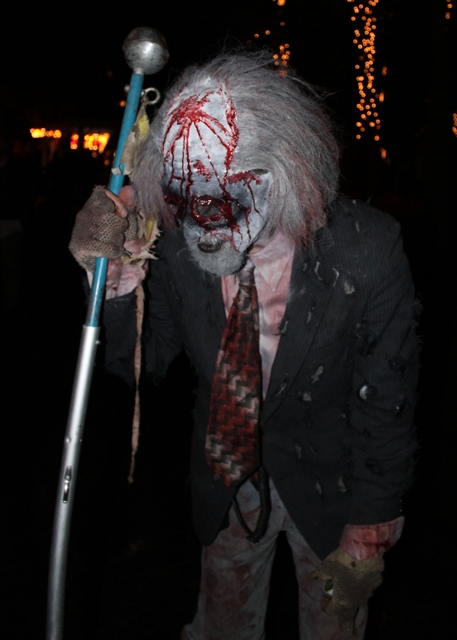 Just as my son & I arrived at the animal barn, she’d screeched her way inside and sought shelter under one of the worker’s aprons. Now personally I don’t have a problem with kids getting a good scare now and then but this one had gone on long enough and I was concerned about the poor animals stuck in the barn and having to listen to it. Fortunately there wasn’t much there aside from a few peacocks (which I know first had can be pretty loud themselves) and a family of Patagonian cavies (mom and a new born). Those two were the ones that needed earplugs!

By the time we’d made it back, my remaining kids were close to the front of the line. My eldest daughter, Leia, had created a mock version of of Svengoolie’s sidekick, Zallman T. Tombtsone for my birthday which had only been a few weeks earlier. Svengoolie signed it, thereby making it an official part of my Sven-shrine. 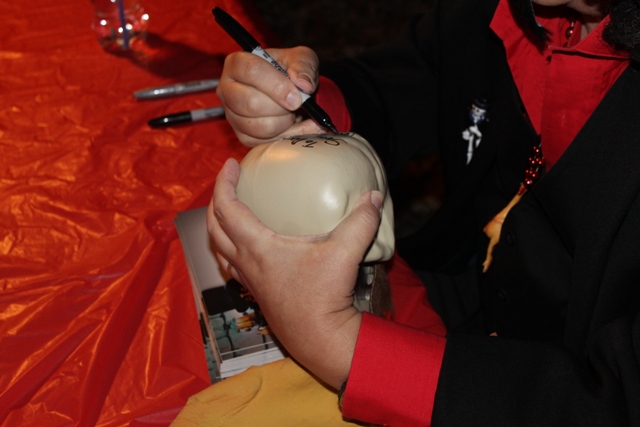 The kids never outright complained though I detected an undercurrent of bitterness with the older ones having to stand outside in the cold. Of course, they’re also teenagers so an undercurrent of bitterness may also just be their natural state. Either way, I bought them some goodies before heading over to Brian Bernardoni’s amazing Svengoolie yard haunt (which I covered on Halloween HERE) and that managed to turn those frowns upside down.

While perhaps not the most inspiring of Svengoolie appearances from my perspective, you can’t say it wasn’t a successful one overall. The weather was bad and the admission wasn’t cheap but he brought in a huge number of guests who, judging by the empty rides, came specifically to see him.

These numbers, however, would pale next to the final stop on his Halloween tour…The Nightmare on Chicago Street. Little did I know upon leaving Santa’s Village that, just one week later, I’d find myself standing behind Svengoolie on stage as he’d be addressing a roaring crowd of nearly 7,000 fans!