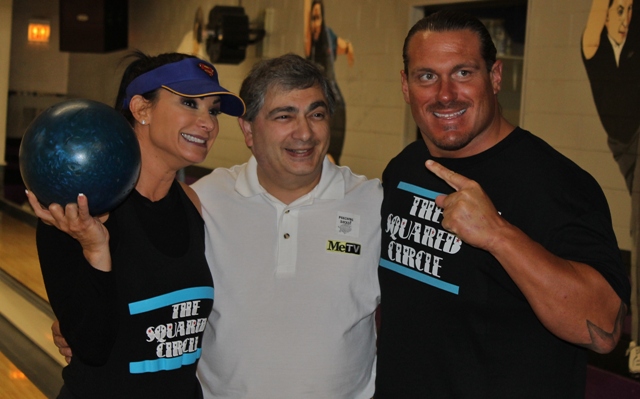 The seeds of this event were actually sewn during Svengoolie’s  appearance at “The Squared Circle” (covered HERE). I mentioned in that post meeting a couple of zoo keepers from The Lincoln Park Zoo; one of whom, Marisa, had arrived with local Chicago Red-eye writer, Elliott Serano. Elliott’s a fellow Svengoolie fan and had just written a big story on the host. He’d brought Marisa along that night so she could sign folks up for her zoo’s AAZK Chapter’s (American Association of Zoo Keepers) “Bowling for Rhinos” with Sven as one of their celebrity guests. Svengoolie has graciously assisted my own Brookfield Zoo AAZK chapter with our annual Vital Grounds fundraiser (providing opportunities for the New England Terror Dave, David Albaugh, to meet him as covered HERE and HERE) and accepted her invitation…even if appearing only as his mild-mannered alter ego, Rich Koz.

As all species of rhinoceros are critically endangered due to habitat loss and poaching, AAZK chapters across the country have been raising money for their protection ala’ Bowling for Rhinos. Since it began over twenty years ago, they’ve raised nearly 5 million dollars and I’m sure they’ll have no trouble surpassing that after this years earnings have all been tallied up. Each year the event gets more and more popular with a growing number of chapters participating whether their zoo has rhinos in their collection or not. In fact, just a couple of weeks before this event, Terror Dave Albaugh’s Roger Williams Park Zoo AAZK Chapter did their first BFR with great success. 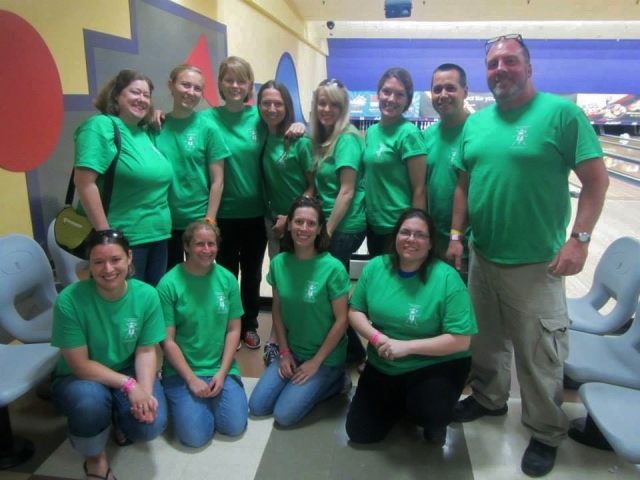 I’d already planned on attending Lincoln Park’s event with Bill Steele (lead mammal keeper at Brookfield Zoo) as a show of fellow Chicago zoo support but the presence of Koz meant that I could actually fulfill two of my life missions at once; animal conservation and Svengoolie stalking.

The event took place at The Diversy River Bowl in Chicago, and I knew I was at the right place when I walked in and saw Marisa setting up all kinds of neat animal related items for their raffle. Though there were lots of great things, it was one item that caught my immediate attention…an authentic ostrich egg painted with the visage of my favorite celebrity…Svengoolie!

My eyes gleamed! At long last, the answer to the time honored question, “What do you get the Svengoolie/zoo fan who has everything?” Here it was in all it’s oval glory…beautiful and shiny while awaiting the signature from the man himself. I asked Marisa if I could hold it and my eyes glazed over white like a great white shark smelling blood as I caressed its shell. Instantly I was transported from The Diversy River Bowl to the Svengoolie shrine in my condo. Why this would look perfect standing next to my Svengoolie doll! I could get an Ostrich egg stand off of eBay and decorate it with little rubber chickens! Needless to say, I knew at that very moment it had to be mine!

As it turns out, it was the masterful work of the aforementioned Elliott. He obviously saw me drooling because, while staring at it (not unlike Golem ogling The Ring), he came over and proudly revealed himself as its creator while showing me snapshots of the entire process. Seconds later I started buying lots of raffle tickets to ensure my ownership. But more on that later…

I greeted Svengoo…er…Rich Koz and his pal/assistant, Jim Roche, while introducing them to Bill. Poor Bill is so busy as our Chapter president during the Vital Grounds events I don’t think he’s ever had much time to actually formally meet him. It wasn’t long after we met up with Lisa Marie Varon a.k.a. professional wrestler, Tara, (or Victoria depending on which wrestling division you were a fan of) and owner of The Squared Circle Restaurant  – home of the Svengoolie Burger! Marisa had asked her if she’d like to join Rich at this event and she later agreed making the total number of celebrities THREE with the third soon to reveal himself…

As we posed for a picture, we got photo-bombed from behind by a big muscular guy. It wasn’t till later that evening that I discovered it was another pro wrestler named “Rhyno” and obviously a great choice for this occasion. I remember talking to another zoo keeper named Allycia (whom I also met at The Squared Circle) when he walked by.

Allycia (pointing): So, did you meet Rhyno?

Dave: Rhyno? You mean that’s him? I thought he was one of your zoo keepers.” 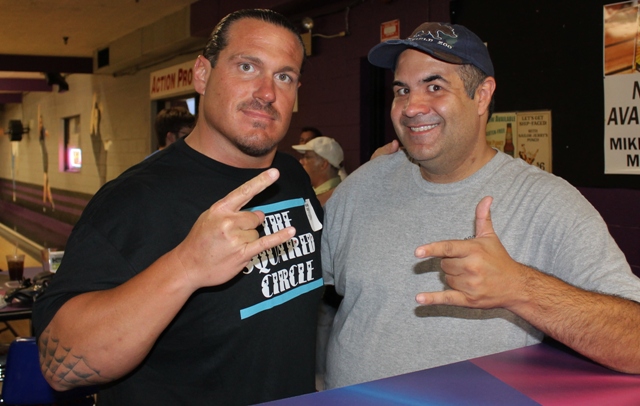 Lisa Marie and I had a conversation about my coverage of her event as well as the wonders of social media (she’s big on Twitter). After she took off quiet, unassuming Bill remarked, “Boy, she sure has a lot of energy.”

Also in attendance was Jamie Lee Cortese who’s written and made lots of appearances on this blog. Jamie’s now an intern at Sven’s station and hasn’t been dressed in her usual Svengoolie attire for some time. Her and I enjoyed some pizza and conversation before the actual bowling would begin. At that time she was concerned about who’d she be bowling with having no idea that she’d soon be hitting the bowling team jackpot!

After the announcement was made for the bowling to commence, Jamie would find herself on the same team as both celebrity wrestlers with Rich and Jim as their cheering section. With that kind of pressure I’d probably bowl a “50” but Jamie turned out to be a great bowler; earning praise and hand-slaps from the energetic Lisa and Rhyno.  Also showing up for support was Don and Bunny a.k.a. Ron and Angela Urban. They were telling me about some upcoming excursions they’d be going on and will be sharing with us in this blog, including a “Torture Museum” (and speaking of torture…how much longer before they announce that I’m the winner of that Svengoolie egg!?!).

I’d brought my bowling ball and initially planned to bowl but Marisa was concerned about having room for people who hadn’t pre-registered so Bill and I respectfully sat out. I hadn’t used that bowling ball probably for 20 years and decided I may as well give it the Svengoolie seal. It’s a strange item to sign but, at the rate I’m going, I’ll likely have him sign my van when he appears at The Volo Auto Museum later this month. I brought it down and had him, Lisa, and Rhyno all sign it. 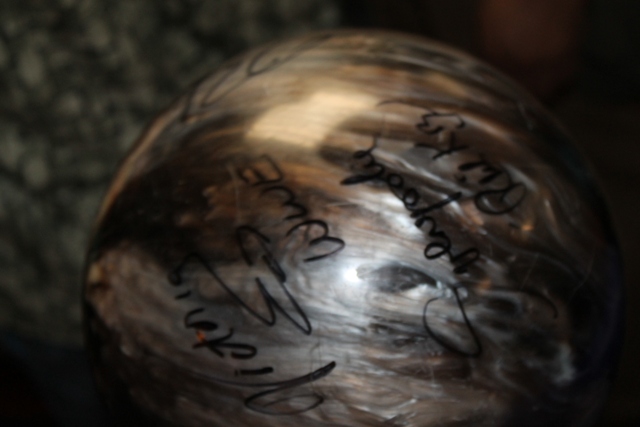 After what seemed like forever, the big moment had finally arrived. Each raffle item came with a corresponding bag of tickets and Elliott began pulling the winners. As soon as he called Rich up to assist, I knew they were about to draw for the prized egg (my precious). I think Bill was still talking to me when I left him mid-sentence to go run over and hear the winner. I stood off to the side awaiting the big moment….”C’mon Lady Luck (whom I’d bribed with lots of tickets) be on my side!”

Rich put his hand in and pulled out the winning ticket. Elliott read the name and, while I can’t remember who it was, I just know that it wasn’t Dave Fuentes. To use a bowling term, my heart rolled into the gutter! How could this have happened??? Foiled…and by own childhood idol! Et Tu Svengoolie…Et Tu??? Some guy came up and claimed the egg while I resisted the urge to trip him. Poor Rich looked as upset as I did which shows how great a guy he is. In truth, I had no regrets as the money was all for a cause I firmly believed in.

The next Svengoolie item was won by Jamie Lee (did I mention she was having the best night ever?) who got a Svengoolie seat cushion. To illustrate how obsessive I was about the egg, I didn’t even see that item until after she’d won it otherwise I’d of likely of placed tickets in that bag too. Jamie proudly showed it to me. “Look what I won!” she said. “Awesome,” I replied (why you little…).

The night ended with Jamie “Queen for a Day” and me with…um…egg on my face. Either way, it was a great night for rhinos with the Lincoln Park AAZK Chapter pulling in a large haul money-wise. A month later their zoo would get the ultimate sign of hope via the birth of a black rhino calf, named King. 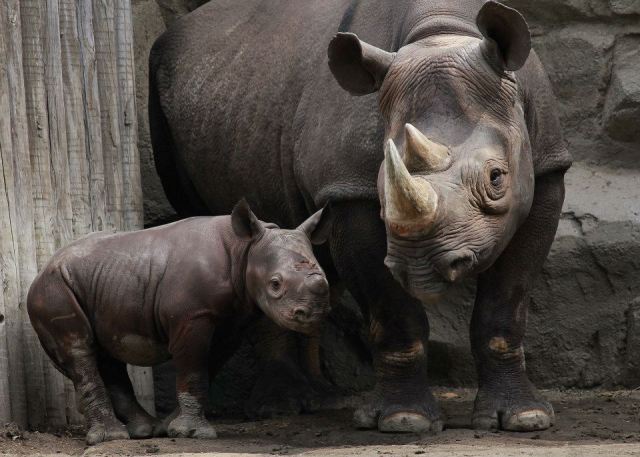 As for my Chapter’s BFR  (which happened a week later) we had our best year to date and, instead of celebrities, offered a ’70s theme. I thought I’d mention this as a follow-up to my Gene Simmons post as I donated my Simmons autograph for our raffle while getting my face painted with his familiar make-up. 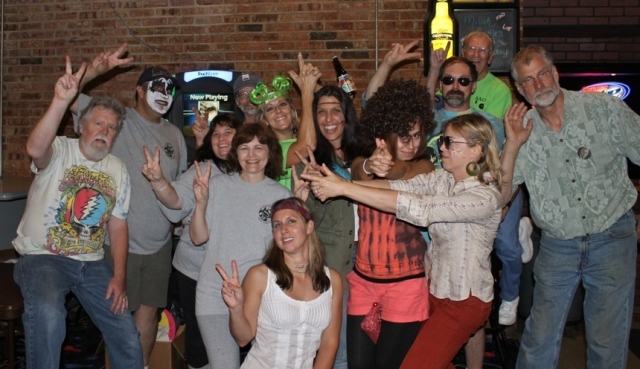 If you would like to assist rhinos and/or join a great organization, sign up as a member of AAZK by clicking HERE. If you do join, send a message to your local zoo so you can be added to their Chapter’s mailings and participate in great events such as these!