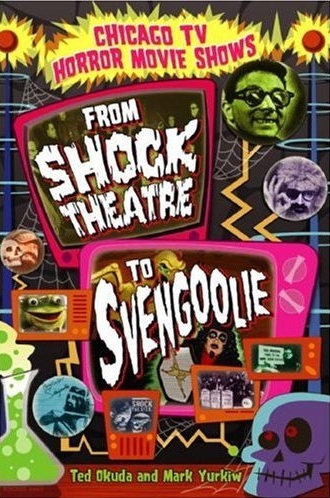 TERROR FROM BEYOND THE DAVES is pleased to announce the re-release of the quintessential guide to Chicago horror hosts and horror programming – “Chicago TV Horror Movie Shows: From Shock Theatre to Svengoolie!” I remember buying this book at “Horrorbles” in Berrrr-wyn, Illinois  during its first release. As a die-hard Rich Koz/Svengoolie fan, I was elated to see his visage on the cover of a book. It seems so odd now but, when I look back, I actually used to feel isolated in my fandom of him. Thanks to the Internet and the Svengoolie YAHOO forum I soon discovered that I was far from alone. And, thanks to THIS book, it filled in a lot of Svengoolie-gaps in information that I had been unaware of…

Yes, for me, the book was a REAL eye opener! It was through those pages that I began seeing my city as if for the first time; proud of its horror & horror hosting heritage. It’s where I discovered Chicago’s first official host, Marvin (there was a sinister swami character that actually predated him but more on that in an upcoming story) and got my first glimpse of the first Svengoolie played by Jerry G. Bishop. It also helped clear up a 30 year rumor I’d once heard about him…

Okay, here’s an incredibly weird, yet true, story from my youth….when Rich Koz’s Son of Svengoolie hit the airwaves,  I was 8 years old and there was a lot of speculation amongst us kids at the Willow School in Homewood regarding the fate of his “father.”  Keep in mind, the original Sven went off the air in 1973 when most of my peers and I were still in diapers. We knew nothing of him aside from our parent’s recollections. The big rumor swirling around the playground at the time was that the first Svengoolie was booted from the air because he microwaved a hamster on TV (NOT true of course). Seriously, that’s what we all believed. After reading “From Shock Theatre to Svengoolie” I began to understand how that goofy myth may have gotten started. In one of horror hostings biggest coups, a change in station management took Jerry G. Bishop’s Svengoolie abruptly off the air and replaced him with Ohio’s The Ghoul. 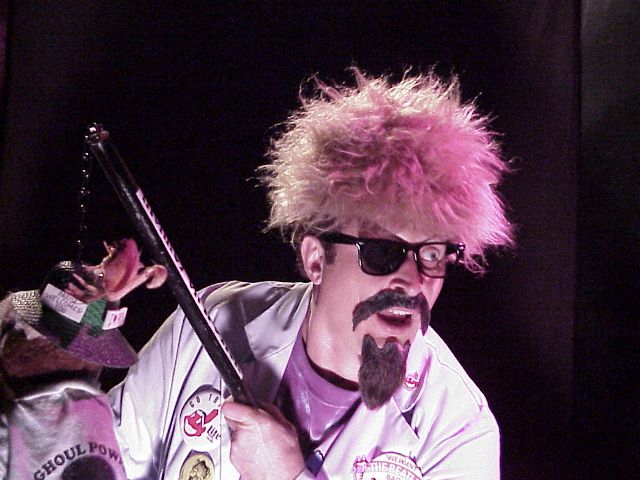 Now The Ghoul has a lot of fans both in his native Ohio and up in Michigan (where he played in tandem with their host, Sir Graves Ghastly) but went over about as well as a pregnant pole-vaulter in The Windy City. This was due to the strong fan-following of Bishop’s Sven, the crappy way he got pulled with viewers receiving no notice, as well as some remarks made by The Ghoul (buy the book and you can read the whole story). As The Ghoul was known for blowing things up, including models and replicas of his Froggy sidekick, I believe that somehow (by the time things trickled down to us over-imaginative school kids) it became the local version of that LIFE Cereal kid dying from mixing pop rock candy and Pepsi-Cola (another demented 70’s rumor with zero basis in fact). Years later, Rich’s Svengoolie did a blog on “rumors” and I shared the story with him. He said he’d never heard that one before so I’m thinking this was a Homewood phenomena.

The short but memorable career of Marvin, the rise and fall of Jerry G. Bishop’s Svengoolie. and the prolific career of Rich Koz’s Svengoolie (a story that is still being played out in ways the author’s couldn’t have imagined at the time of the books writing) are just some of many great things featured in this book! There are glorious details and photos that any horror fan, native to Chicago or otherwise, will love!

Svengoolie signs a copy of the book at a recent appearance!

For the past couple of years this book was out of print and hard to come by! Now the book is available again and here are your options…

You can order a copy via Amazon by clicking HERE!

It is also available via The Barnes & Noble site HERE!

If you live in the Chicago area, and would like to indulge in some good old fashioned “cash & carry,” you can stop on over to Horrorbles in Berrr-wyn and get one too while supplies last!

I can’t recommend this book enough so be sure to get one (however you choose)! I promise…no hamsters were harmed in the making of this book.