Okay, I admit it. I am not a car person. Never was, never will be. Cars are, to me, a necessary evil; always needing to be maintained an sometimes requiring lots of cash to do so. Yet, when I happened upon a notice advertising the Volo Auto Museum’s 12th Annual  Charity Car Show would be featuring the featuring the legendary Munster Coach and Dragula cars reunited after 46 years, something inside me went, “Hmmmmm.”

I am definitely a fan of the 1960’s show starring Fred Gwynne and Yvonne DeCarlo as Herman and Lilly Munster! Their rambling old mansion at 1313 Mockingbird Lane definitely held an attraction for me beginning when I was a young girl. Who wouldn’t want to live in that big, dusty house with its trap doors and a dragon living under the staircase? I even have “The Munsters” complete series DVD set squirreled away in my DVD cabinet. Shhh…don’t tell my husband, Bill! He already thinks I’m a big enough dork as it is!

Anyway, the day before the event was to take place, Bill mentioned that our friend, Ron, wanted to go to the Volo Auto Museum, so I saw my chance and said that there was going to be a big event there and that I really wanted to go. Bill was, no doubt, surprised in my sudden interest in cars but didn’t need any more persuading, especially after pulling up the impressive list of events on his computer. He also noticed that there was going to be a “Pin-up Girl Contest” going on and asked why I don’t enter? What a sweet man, but I am twenty years too late for that.

So on Saturday, July 7th, Bill, Ron, and I headed to Volo, Illinois which, amazingly enough, is only 5 minutes from where we live. What luck! Never has an event such as this been so close to home and involved such little travel time.

We arrived to a big set up outside the Auto Mall, A “live” band, beautiful women (dressed in their finest cherry-print dresses & high heels along with their hair in curls which struggled to survive the 100 degree heatwave) for the Pin-up Girl Contest, and a long line of people waiting to meet George Barris, famous for designing cars such as the “Munster Koach,” “Drag-u-la,” and the “Batmobile” from the 1960’s Adam West series.

The line to see Mr. Barris was flanked by Oh, such wonders to my eyes! To the left was “Drag-u-la” which fans will remember was created by Grandpa Munster so he could win back the “Munster Coach,” which Herman had lost in a drag race. “Drag-u-la” also made an appearance in MUNSTER, GO HOME when Herman drove it cross country race. A little beauty, the body of the car is a gleaming gold coffin with organ pipes on each side, and a plastic bubble under which the driver would sit. 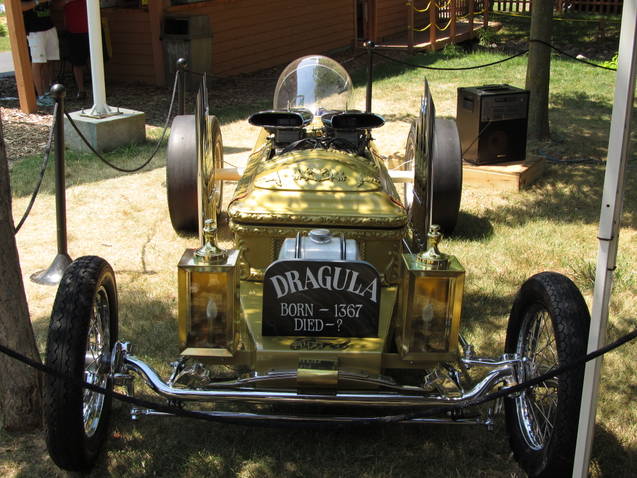 To the right of the line was the “Batcycle.” The “Batcycle” was used in both the 1966 film BATMAN as well as the television series and there are reported to have been four replicas built for tours. Oh, it was cool alright, even with the attached sidecar so Robin wouldn’t get left behind. Black, white, and red with batwing fins, who wouldn’t want to take it for a ride? 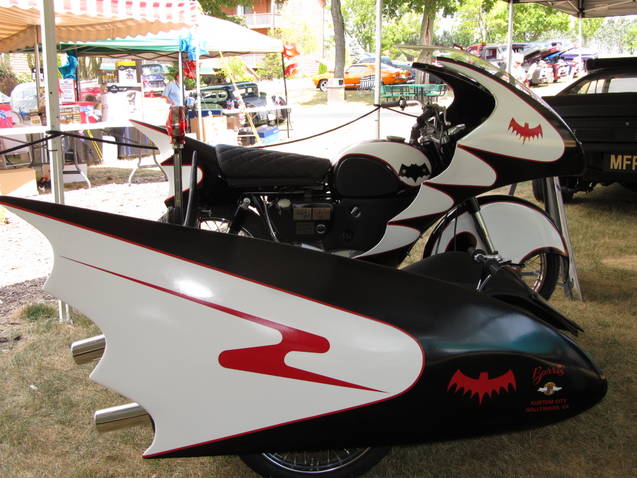 Ready to ride the BATCYCLE?

Another view of the BATCYCLE 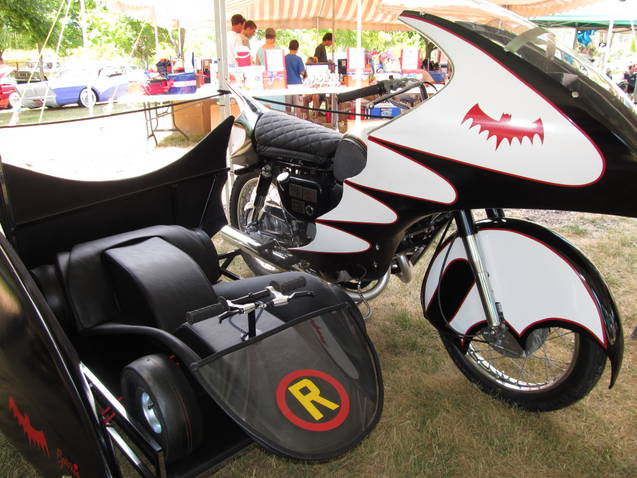 Right behind the “Batcycle,” oh WOW…the “Munster Koach, which was seen in both the television shows series as well as the feature film. Elegant, with black pearl paint, red interior seats, and cobwebs etched on the front lanterns – it even had a phone in the back seat! Normally seen in black & white, who knew the “Munster Koach” was actually quite stylish and sophisticated? VERY nice! 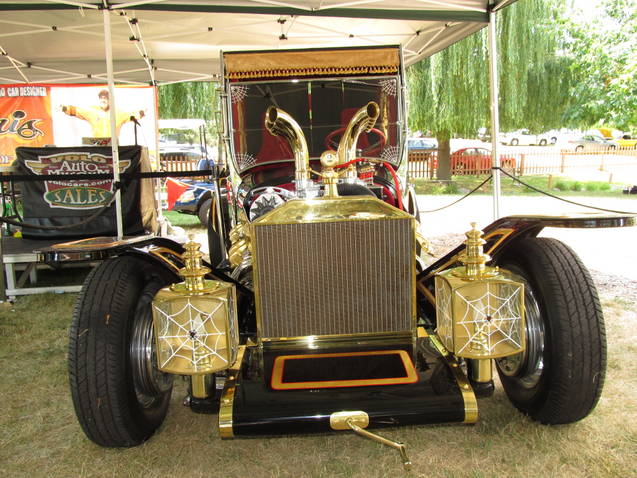 Crank up the MUNSTER KOACH fo me, will ya?

George Barris in front of the MUNSTER KOACH 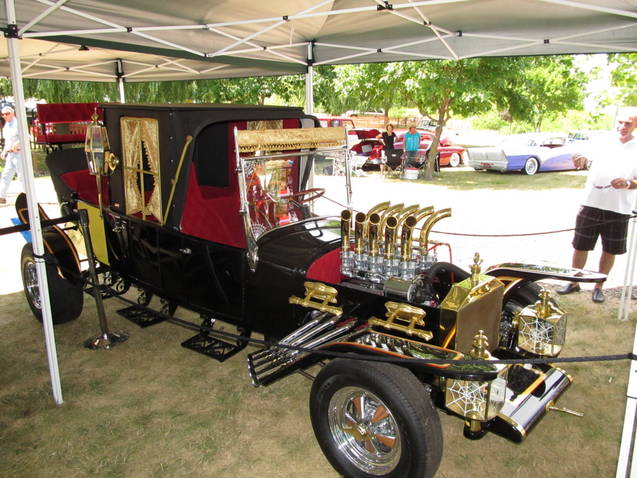 Fine to sit & chat as long as it doesn’t rain!

Where the MUNSTER KOACH will now reside

After ogling the cars, we briefly stood in line to meet Mr. Barris, but as I mentioned, it was 100 degrees outside and Ron really wanted to go inside the air-conditioned Auto Museum first. So we left and decided to come back for an autograph later.

We entered the Auto Museum and what a sight to behold! Cars from BATMAN (yes, I drooled a little over the “Batmobile”), GHOSTBUSTERS, GREASE, TERMINATOR 3, DICK TRACY, BONNIE & CLYDE, THE FLINSTONES, BACK TO THE FUTURE…the list goes on! 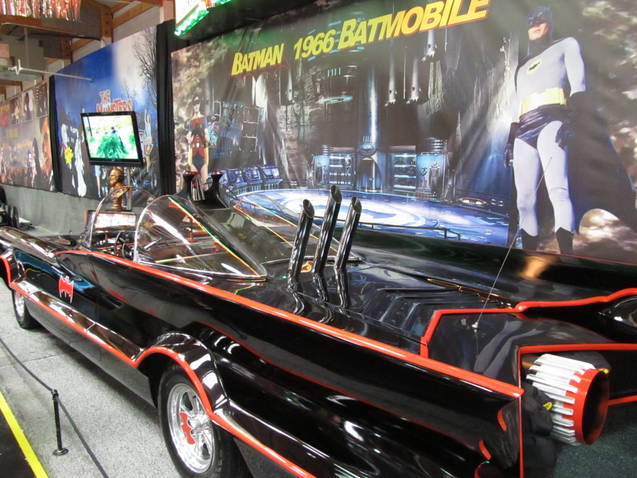 A piece of my childhood

You know I wanted to hop in! 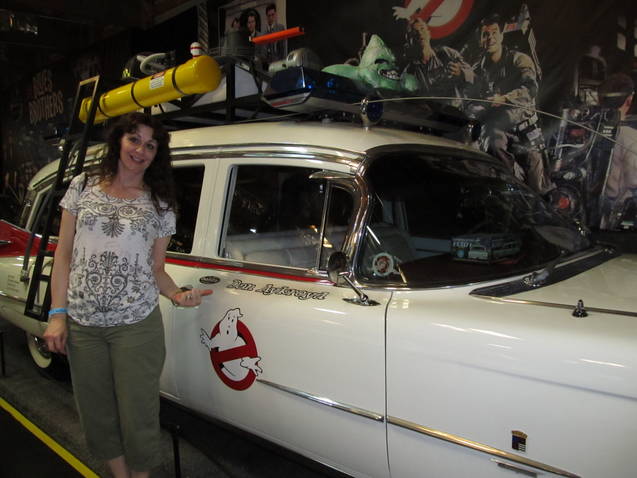 Not to mention all the classic, antique cars in another section of the Mall, some with price tags that cost more than a house! After touring the inside the inside Mall and getting some nice photos and not so nice photos (like when I stepped in front of a car and squealed, “Take my picture, Bill! Take my picture!!!”), we finally went back outside.

Oh no, an opportunity missed! George Barris was gone and the “Pin-up Girl Contest” was ready to begin. I spotted Horror Host, Count Gregula, in the crowd sans make-up. I had looked for him ever since our arrival because he was making an appearance but, by the time I managed to find him, he was out of costume. While he was taking pictures of the “Pin-up” girls, I ran over to introduce myself and shake his and Countess Gregula’s hands before scurrying out of his way. I didn’t want to interrupt his picture taking too much.

It turns out that George Barris was a judge for the contest and seemed to enjoy himself immensely. There were three winners for three different categories and they were all great looking, fun ladies, with the “Barris Bombshell” winner receiving a photo shoot with George Barris’ “Munster Koach.” Lucky lady!

George Barris and one of the lucky winners!

This lucky lady won a photo shoot with the MUNSTER KOACH

So ended my first car show and, as I left, looking longingly at the “Munster Koach,” I could help but think, “Maybe I’m a car person after all.”

TERROR FROM BEYOND THE DAVES would like to thank Joan Yingst for this fantastic story and to her husband, Bill Yingst, for taking what I am sure we can all agree are AMAZING pictures!