Usually when I attend a fan convention, it’s after weeks of planning and preparation leading up to the big weekend itself. MONSTERBASH (summer 2012) was a last minute decision that threw my convention(al) wisdom straight out the window! I’ve always wanted to do one of these but there were two main issues; 1) Its about a 7 hour drive from my native Chicago to Butler, Pennsylvania and certainly not a journey I relish doing alone. 2) Its slated right before July which is always the busiest convention month here in the Midwest. This requires me having to use up vacation days and resources at a time when I need to be stockpiling them in order to get through the next month. So what changed my mind? 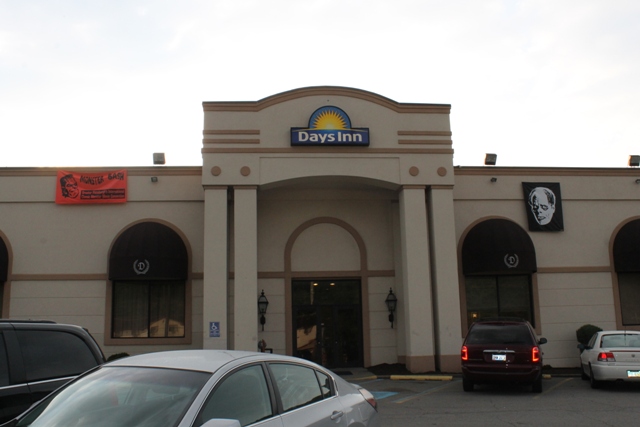 Pending some upheavals going on in my personal life, my children are all in Colorado staying with my brother for the summer. This was to give their mother and I a chance to separate and get settled before their return. At this date, we are still in the same house and I find myself looking for any and all opportunities to get out.  Let me state for the record that I am NOT feeling sad about this situation (other than the kids being away) and that this marriage was an ill-conceived nightmare from the get-go -one that I am SO happy is finally nearing its bitter end. I am, however, anxious, to get through this difficult transition period so we can all start moving forward.

MONSTERBASH would provide a welcome excursion while also giving me a chance to see some of my horror host friends who were slated to appear. I had already bought a weekend pass some months ago when I mistakenly thought it would be the locale for accepting our Rondo Award. My major obstacle was finding a place to stay. For those who’ve attended (or have tried to attend) this event, you know that finding a hotel vacancy around MONSTERBASH is about as easy as trying to sell a drowning man a glass of water. So, in the essence of wanting to get away from Chicago while also embarking on an adventure of sorts, I gutted out the passenger seats from my van (which would serve as my accommodations) and headed out for Pennsylvania after work Thursday night.

The drive was smooth and I arrived in PA at about 12:30am (EST). I found a cozy spot in the hotel parking lot, texted word to my friends that I’d made it there safely, and unwrapped my sleeping bag. With no small thanks to a portable camping fan I’d purchased at Wal-Mart, I managed to get about 5 hours of sleep. The next morning I walked across the street to the local “Burger King” for breakfast….as well as a shave. While enjoying a cup of coffee, I saw the publisher of SCARY MONSTERS MAGAZINE, Dennis Druktenis, walking in with his son, Dylan. Dylan is a young film maker with a rosy future who was premiering one of his movies during this event. We chatted a bit and this was the first time I got to meet Dylan whom I’ve heard Dennis speak of many times. He seemed like a really great guy and also very bright – I know Dennis must be very proud! He reminded me a lot of my own son, Alex, whom I am also proud of. Now if only I could get the dear boy to embrace monster movies over video games. “So where are you staying?” asked Dennis. “Umm…up the road” (technically not a lie). 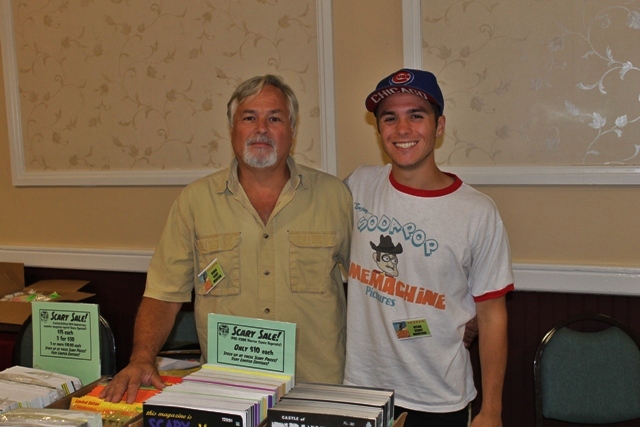 Shortly after returning to the hotel, I knew that there was something different about this convention. For one thing, it specializes in classic monsters and is run by The Adams Family (seriously, that’s the name of the family who runs it) who were in the lobby busily setting out shirts and registration packets when I walked in. Having gotten there earlier than the scheduled time, Janice Adams happily gave me my name badge and materials. I mentioned to her that this was my first MONSTERBASH and, with that, Ron Adams came over to shake my hand and welcome me.  How many conventions can boast this kind of a friendly greeting?

Soon after that, I heard my name called and turned to see Facebook friend, April Tomaskovic Sargent. April has been following our blog and is a fan of Wolfman Mac’s Chiller Drive-in and Svengoolie. She was attending the event with her wonderful family and also volunteered to assist. We’d end up chatting a few times and I was SO happy to have finally met her. I loved some of her commentary on horror films (especially DARK SHADOWS and remakes) and sure hope that the other Dave will get a chance to meet her too. In any event, I am happy to now drop the word “Facebook” and know her simply as “friend.” 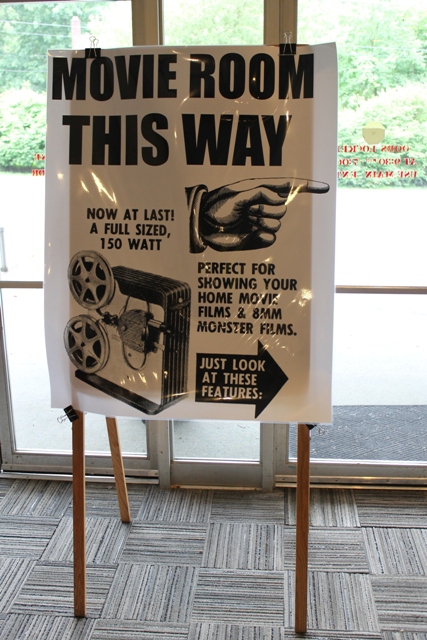 Open bright and early on Friday was the Movie Room which also served for panels and special events. Since I was an early bird (awakened by the real ones outside), I got to see it fairly empty but it would be full most of the weekend. I sat down and watched some old cartoons with monster themes. Later I would also catch GORGO, MONSTER ON CAMPUS, and  THE VALLEY OF GWANGI. It was so much fun getting to see those films on a large screen along with fellow fans! 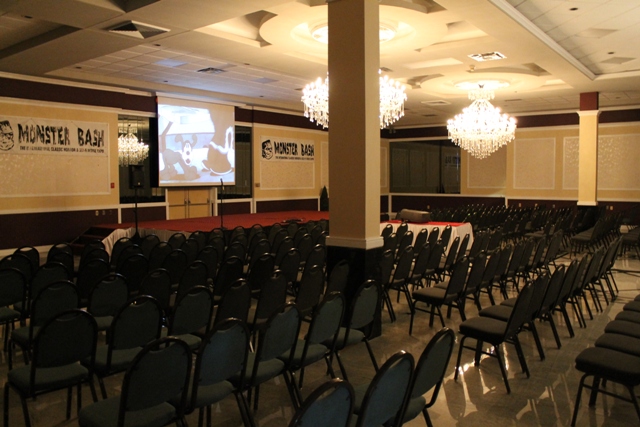 As for opportunities to shop, there were a few rooms to choose from… 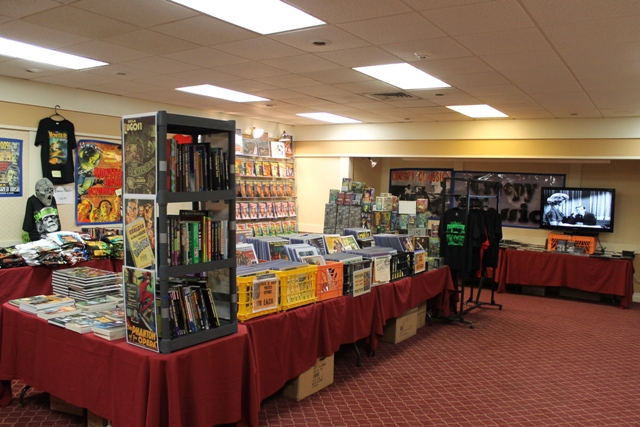 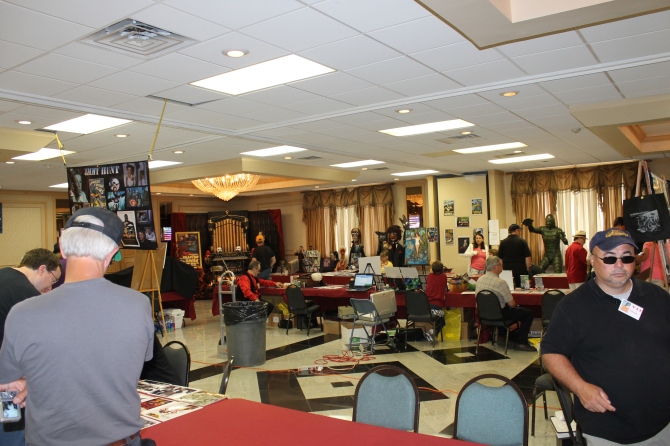 Before the main dealer (not pictured) and guest rooms opened (3pm) there was also a FREE Monster Family Picnic hosted in the Courtyard. There was lots of great food and company and I was so happy to run into “Chiller Drive-in” and “The Ghoul” alumnus, Mike Murphy! Fans of this site will probably know him best as “Son of Froggy!”

Later I had the privilege of being introduced (by Penny Dreadful) to a fellow blogger, Max from “Lounge of the Drunken Severed Head.” This was the Rondo winning blog of 2009 and I just checked it out and it’s a LOT of fun! Max and his wife, Jane, were very kind and even asked if I’d join them and some friends for dinner. These friends would include film author and historian, Tom Weaver, as well as historian Rich Scrivani who penned a book on Zacherley. Both men were brilliant and I can’t thank Max enough for his including me. During the meal, Jane revealed that she’d grown up with Dr. Paul Bearer, and we discussed the world of horror hosts. It turns out that Jane is VERY savvy on the subject and has been following host activities long before we Daves ever did. She even had the good fortune of attending A. Ghastlee Ghoul’s wedding!  I sure hope they’ll stay in touch and that we’ll see each other again. And be sure to check out Max’s blog by clicking HERE! Max & Jane, if you are reading this, PLEASE visit the “Contact us” link on our site and drop me a line.

I had a great time at this event and lots more stories will be appearing soon. This event, like G-Fest, was clearly more than just a convention. It is a weekend where the celebrity guests and fanfare is secondary to the gathering itself.  The word nostalgia translates from Greek to mean “the pain from an old wound.” Indeed we all ache for that time in our lives when life was simpler and we’d light up when our favorite monster movies would air or we could see their gruesome visage courtesy of a monster magazine! Some of us (not me, unfortunately) even had the privilege of seeing these films on the big screen back when you could spend a day at the movies for little more than a quarter. Kudos to  MONSTERBASH fans for figuring out a way to reclaim those great memories while also creating new ones!

Even the “Monster on Campus” felt like he was back in college!

A lot of my horror host friends and fans of the site asked me about the other Terror Dave, David Albaugh. I must say that this event would have been right up his alley and there were quite a few moments that I found myself wishing I had my best friend here to share this with me.

By Saturday evening my crappy sleep, coupled with the heat & humidity, dictated that I had better get home for some much needed rest after a 90 minute shower! I missed a lot of great things that were still planned but, having learned my lesson, did make my hotel arrangements already for next year. They’ve got a new hotel slated but, believe it or not, that one is already booked so I opted for one across the street. No problem as I can safely say that my sleeping in the back of a van days are OVER! Next summer it will move from Butler to Mars, Pennsylvania carrying the appropriate theme of “Monster Bash Goes to Mars!” 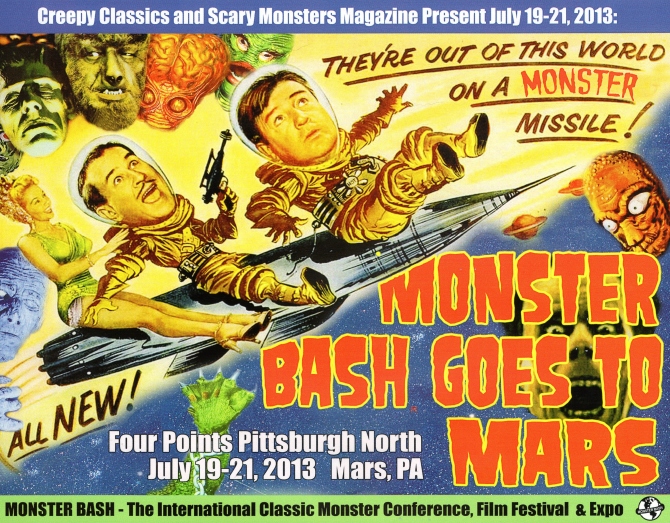 Even if the bash was to be on the planet Mars, I know I’d figure out a way to get there. Surely the back of a rocket ship is more comfortable than a Dodge Caravan.