I had just seen Svengoolie the night before at Chicago’s Brookfield Zoo (see story HERE) but couldn’t pass up another chance to do so the next day at a local grocery store called Ultra Foods. My reasoning was simple; this past month I’d put in a lot of mileage to see the national host at various locations throughout the Chicagoland (and beyond) area. How could I NOT see him when he was appearing ten minutes from where I live? So, despite the fact that my Facebook friends are starting to accuse me of stalking the poor fellow, off I went!

In past years (and especially these past weeks) I’ve had Sven sign just about everything from a Svengoolie doll to a wax Mold-a-Rama. There was one item, however, that I hadn’t had signed and this seemed the perfect opportunity to do so. Wisconsin host, Dr. Destruction, had given me a tin sign (given to him by a friend) that had found itself prominently displayed on my wall months ago. The sign was a promo from one of Sven’s past appearances at Great America’s Fright Fest and was just too large to carry around while still maintaining mobility.  I wasn’t sure how a grocery store visit would be in terms of a turn-out, so I figured now was my chance!

What I had assumed would be a mediocre event, ended up being one of Sven’s most memorable appearances!  Sven no sooner arrived when a fan driving a hearse stopped him in the parking lot (see photo at the top of this piece) for a picture with his macabre set of wheels. I arrived afterwards (that’s the irony, I apparently can only arrive early when he’s showing up farther away) and asked a clerk where Sven would be located. I walked over to the produce department and saw Jim Roche and Sven alone at a table. “Oh, great!” I thought. “I’ll have him all to myself (another bit of irony, I see Sven a LOT but never get much of a chance to actually chat with him).” It wasn’t until I got in front of his table that I noticed a line of eager fans awaiting their Svengoolie encounter!

Rather than simply stand in line, I had my son keep my place while I used the opportunity to talk to some of my fellow fans.  After all, if life had placed Svengoolie before lemons, then it was up to me to make lemonade (awaiting a projectile rubber chicken to hit me as I type this)! Before doing so, I thought I’d say hello to Sven’s devoted assistant and friend, Jim Roche!

Sadly, I missed seeing one fan who managed to bring along something to this signing NEVER seen at a Svengoolie event before; a real LIVE chicken! The family pet peeked its head out for a picture (below) and Svengoolie commented later on how well-behaved it was. I sure hope she avoided walking past the poultry section on her way out for fear of traumatizing the poor thing! 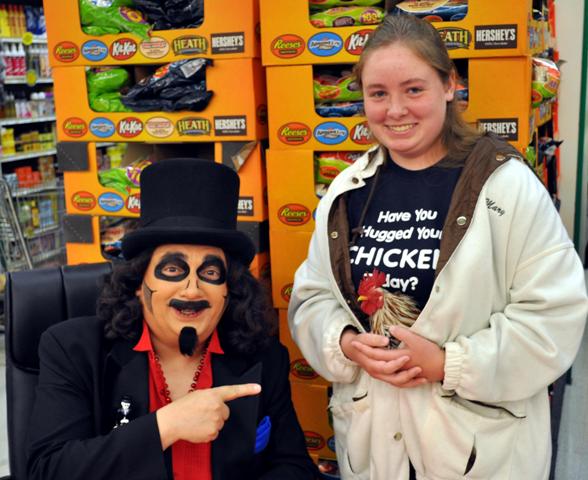 All in all, one of the friendliest and most unique Sven appearances I’ve seen to date! Ultra Foods strategically placed Sven by the Halloween candy and, from what I saw, the ploy had clearly worked! I am no fan of grocery shopping (especially with the food prices these days) but getting to see my favorite host was certainly a great incentive. Now if only I could get him to appear at my dentist’s office…

One thought on “Meeting Svengoolie at Ultra Foods is at the Top of Every Horror Host Fans Shopping List!”