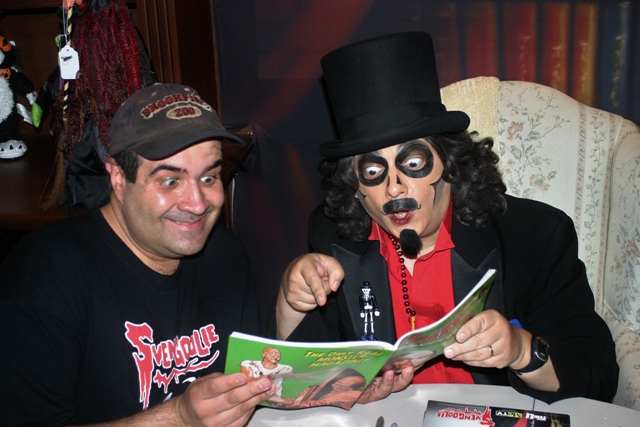 Recently, I joked with friends that this Halloween season I’d be like a Grateful Dead “Deadhead” or Jimmy Buffett “Parrot head” and follow the Horror Host  Svengoolie around wherever he goes. Throughout this latest Svengoolie “tour,” I’ve made it as far north as J.J. Blinkers near the Wisconsin border and all the way out to The Amhurst Asylum in Valparaiso, Indiana with the month not even half over. I do have to say that of all these wonderful venues, NONE were as beautiful as Long Grove, Illinois where Sven appeared last Saturday at a new 365 day Halloween store – “Harper’s Hollow!”

It was 80 degrees, sunny, and the fall foliage was postcard perfect as I made way into town. My destination was located on Robert Parker ‘Coffin” Road (seriously) but upon reaching that street I found it to be anything but dead. Numerous visitors walked the cobblestone walkways checking out the various country shops while wafts of locust leaves twirled in autumn breeze.

We arrived a couple of hours before Sven was slated to appear and, after finding a parking spot, walked through the main thoroughfare seeking out the scary shop. I can’t stress enough how nice this area was. Just about every aspect gave the impression that it was a “fall town.” 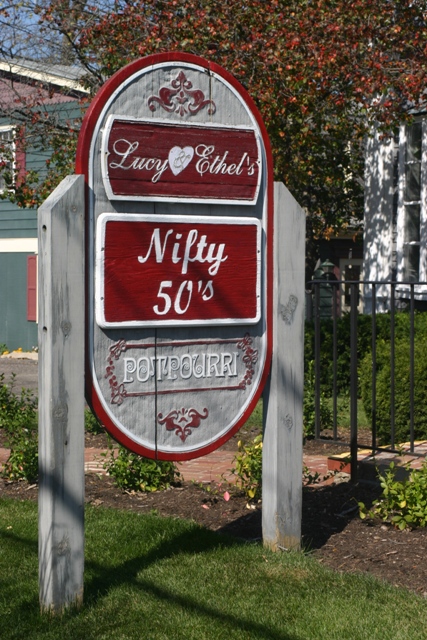 Okay, okay, I know….This post of TERROR FROM BEYOND THE DAVES is starting to read like an issue of “Midwest Living.” I’ll skim over the parts where we bought homemade apple butter from the “Long Grove Apple Haus” and ate lunch outside at the “Long Grove Cafe” while watching geese swim in the pond below. Let’s get back to the subject of our story…

We made our way to “Harper’s Hollow” which was easy to spot in lieu of a group of people standing outside wearing “It Came from Berwyn” Svengoolie T-shirts. I opted to wear my new Sven Chicken-thrower Tee and this caught the attention of one of the fans. I was approached by a nice woman and her two daughters (each wearing the previous Sven design) who wanted to get a closer look at the new one. After showing off the latest in  fall horror fashion (which you can get too at Svengoolie.com), she introduced herself as Ann Marie Westfall. Ms Westfall spoke of how much she loved Svengoolie’s show and how last year she had the honor of seeing Sven in Elgin, Illinois where he had hosted a costume contest. Hoping that Sven will return there again this year, she proudly mentioned that she won 4th prize in her stylish Daisy Duck costume!

Shortly before Sven’s arrival, we went inside to check out the store. If the term “Halloween Store” makes you think of one of those SPIRIT chains, let me wipe that image clean from your mind. Despite its horror theme, this shop maintained the same class and country feel as the stores surrounding it. Inside were vintage looking Halloween decorations interspersed with fan favorites. 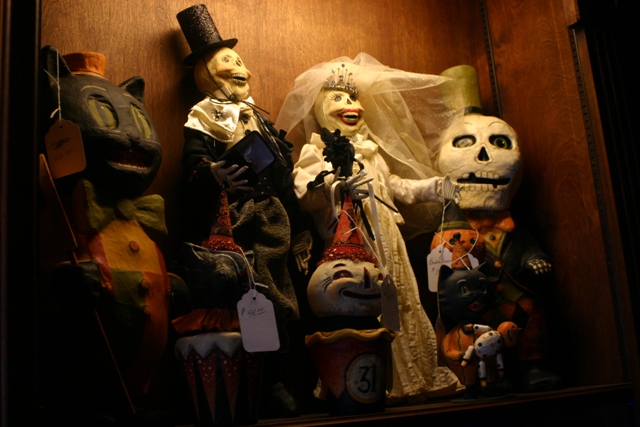 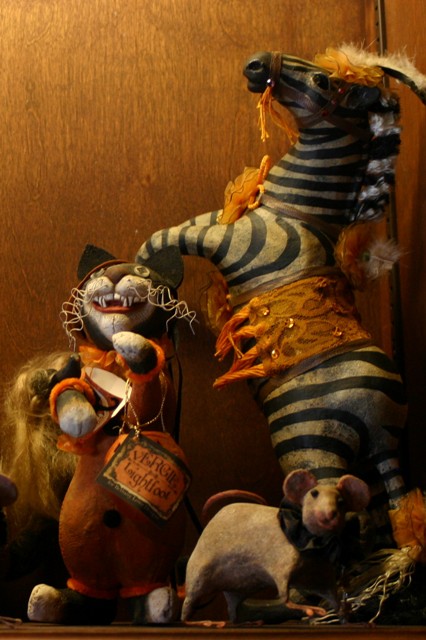 This, however, should not imply that there wasn’t anything to appeal to other horror tastes as it also boasted many other amazing items featuring the Universal Monsters, The Munsters, animatronic ghouls, and much, much more!

The heart of every horror fan will be warmed at Harper’s Hollow!

Soon Svengoolie arrived and met with the store’s proud owner, Robert Positano! The two posed for a shot and it was time for Sven to greet his fans!

Like most Svengoolie gatherings, just about every age and demographic was represented – all wearing big smiles (if not the new Sven shirt) as they had an opportunity to meet their Monster Movie Ambassador. One woman brought along a satchel full of her own favored style of “rubber chickens” as Sven signed away!

As I waited in line, I couldn’t help but notice the “Family Classics” (a vintage Chicago program) like signing area designated for Sven. A cushy arm chair with a painting of a home library had everything but the late, Frazier Thomas, to make it complete. This gave me an idea…. I had brought along a copy of the latest SCARY MONSTERS MAGAZINE which featured the Svengoolie memories of both myself as well as my best friend and co-blogger, David Albaugh. Sven had signed my copy the week before at The Amhurst Asylum (see that story HERE) and I wanted him to sign another for David before I fly out to Rhode Island and see him this week. I told Sven that I’d like to have a shot of us reading the magazine together in the spirit of the backdrop. Sven laughed and eagerly agreed!

Next he greeted my kids –  especially my daughter, Jade, who was anxious for Sven to sign the rubber chicken she’d retrieved from the Berwyn Houby Parade the previous weekend (story HERE). My son, Luke, had brought his rubber chicken along for the ride too, though it had been signed by Sven a few years back.  I mentioned to Sven’s assistant, Jim Roche, that I would be out of town next weekend and unable to attend any of Sven’s slated appearances. Jim said he’d be happy to share pictures and I sure hope some Sven fan out there who might be reading this will share their stories as well! One thing I won’t have to worry about is missing Sven’s show as he is now airing via MeTV in New England! Like last week, Sven was passing out promos for next week’s show and here’s a peak…

We walked back through the store and checked out some of the wonderful Dept 56 Halloween Village pieces (a subject I’ll be covering soon as I have my own Dept 56 Halloween Village up at my home) and other unique items that Halloween fans looking for rarer goodies to add to their collections will, no doubt, want to get their hands on. As we made our way back through town I thought of Sven’s recent blog where he mentioned growing up not far from here. I couldn’t help but think how a place such as this, tailor made for my favorite time of year, was the absolute perfect spot for raising a Horror Host!