Last Thursday, I headed up to Michigan to attend the studio Open House for “Wolfman Mac’s Chiller Drive-in!” Prior to this event, I wrestled with the idea of making a nearly five hour exodus for the value of an evening’s worth of entertainment but, realizing the rarity of this opportunity, decided to just go fort it. In the end, it was well worth it!

“Wolfman Mac’s Chiller Drive-in” is filmed at the Erebus Haunted Attraction in Pontiac, Michigan.  This is not only a working Haunted House, but the largest in the country boasting four stories of terror. As I walked towards the entrance I noticed one of  the show’s writers, Raymond Dean Vanderkolk, standing outside wearing his witch-doctor costume. I lowered my cap (hiding my face) and slowly approached him from the side.  I  brought out an 8×10 photo of Dean and I from Horrorhound and innocently asked, “Do you know where can I find this guy?”

We laughed and chatted a bit before I signed us all in on The Chiller Drive-in’s guest registry. Later, Dean signed my 8×10 photo  (above) which was really nice.

He then introduced me to the newest cast member of The Chiller Drive-in, Scary Grant the Vampire (Rick Bobier). Thanks to the other Dave, I was able to see the recent 3rd season premiere of “Wolfman Mac’s Chiller Drive-in” which featured Scary Grant in its skit. He was very nice and I really enjoyed talking to him. He told me that he was familiar with the Chicago area and that he had been present the day they filmed the famous “mall chase” scene in  THE BLUES BROTHERS. This had taken place not far from where I had grown up.  He handed me his business card which was also quite amusing… 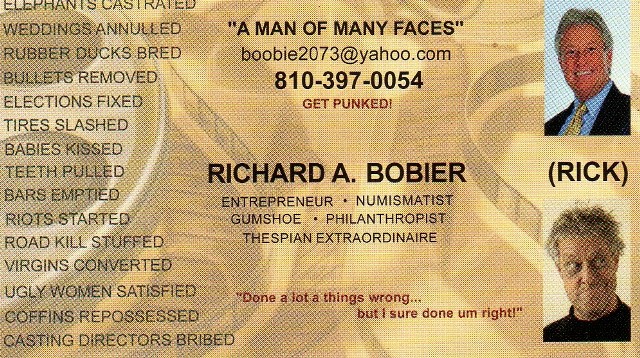 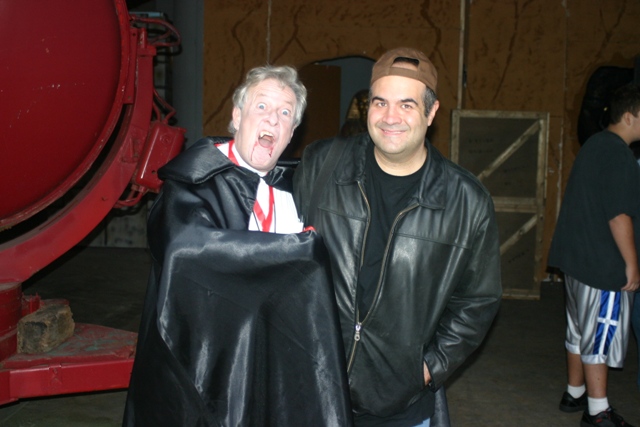 After entering, you were treated to some  amazing sights befitting a haunted house! The first thing I noticed was a large, hanging UFO complete with alien pilot above.  To the right there was an old hearse, television monitors giving a sneak peek at the newest Wolfman Mac episode (HOUSE ON HAUNTED HILL) and Madame Nina telling fortunes to those who dared approach.

The only one who traveled farther than we did to get “The Chiller Drive-in.”

We had a lot of fun visiting Madame Nina who played her character to the hilt.  From Madame Nina, we headed to the left of the entrance towards the main set. Before arriving, however, we were treated to various props used in past episodes of “Wolfman Mac’s Chiller drive-in.”

As we entered the next section, we saw a bevy of  Halloween style treats that  would make Martha Stewart envious! One look at all those homemade goodies along with spooky, decorative touches instantly put me in the Halloween spirit!  In fact, I consider the whole experience to be the ultimate kick-off to my favorite holiday. 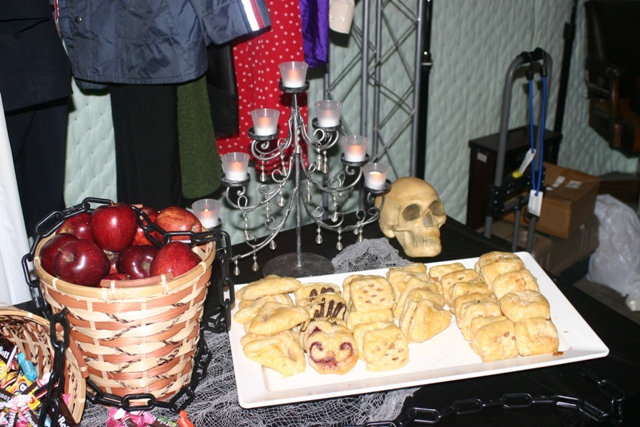 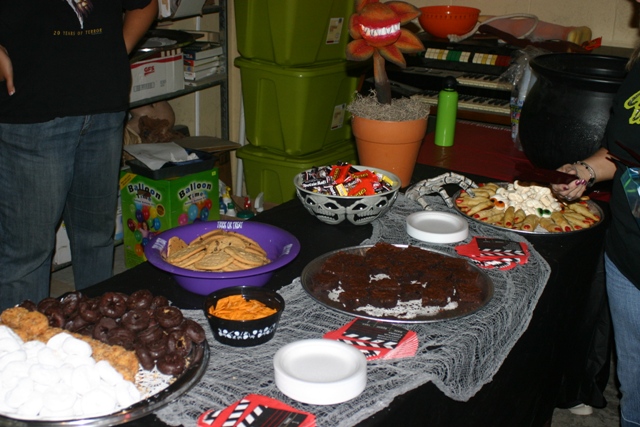 After a pit stop in this room, it was time to see The Chiller Drive-in’s “real” concession stand. The stand itself  had a vintage feel, representing the golden era of Drive-in cinema. Vicki Vanderkolk, producer of the show, was selling Chiller Drive-in merchandise. It was great seeing her again and she had been so helpful in sending me directions that, unlike Mapquest, avoided a lot of road construction.

In front of the Chiller Drive-in Concession 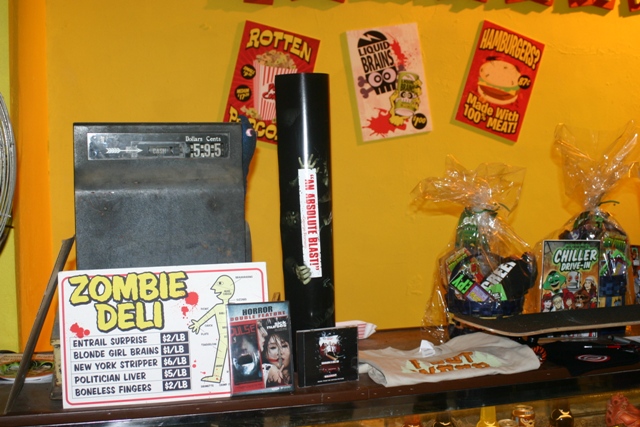 Suddenly everyone began heading towards the “projection room” of The Chiller Drive-in. Wolfman Mac had entered the building.