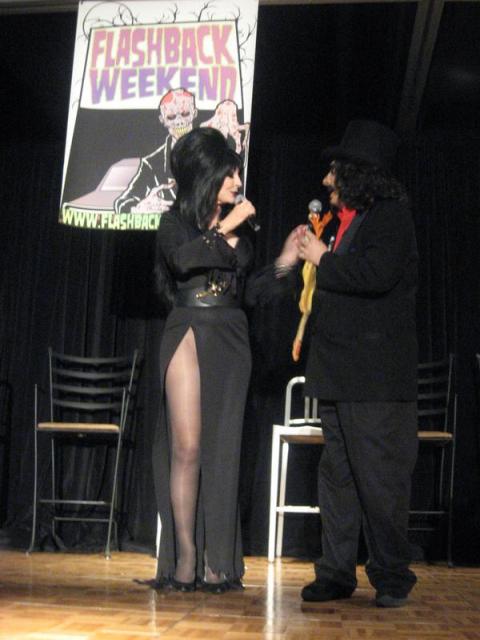 Back in July of 2008, the Crown Plaza Hotel in Rosemont, Illinois saw the meeting of two legendary horror hosts. Chicago icon, Svengoolie, was joined on stage by national sensation – Elvira the Mistress of the Dark. This was part of the annual Flashback Weekend Convention, an event that Svengoolie had attended faithfully for years, often acting as MC of their popular costume contest. I was unable to attend this convention and, upon discovering that the two hosts had not only met but actually performed together, became literally sick for missing it.

Fortunately, the occasion was captured on film and Svengoolie proudly presented the footage on his own show, weeks later. He humorously introduced it as  “the meeting of two horror legends ….and that’s just her!”

Seeing the two together was, for me, a surreal experience. For many Chicagoans, like myself, these were the only horror hosts they’d ever been exposed to. Prior to the convention, there was some fan trepidation regarding which host was better, why is Elvira entering Svengoolie territory, etc. Call it “King Kong vs Godzilla” syndrome, it has become human nature that we automatically assume rivalry when two titans of the same profession enter the same vicinity. Many of us fans were afraid to admit out loud that we loved BOTH of these hosts and that they each brought their own distinct style to the horror host table. Being one of those individuals, I was thrilled to see them take each others hand and share a genuinely warm moment on stage together.

At the end of Svengoolie’s clip, a shot of the two hosts together was shown along with the tag-line, “The new Sonny and Cher?” Funny as it was, it may not be as far fetched as you think…

The horror world was a buzz this past summer with the announcement that Elvira would be returning to her original role as TV horror hostess via the resurrection of her show “Elvira’s Movie Macabre.” While The Mistress of the Dark has made numerous hosting appearances on direct to VHS and DVD shows, this is the first time Cassandra Peterson has hosted on commercial television since the early 1980’s.

While reviewing messages from the Svengoolie YAHOO Group forum, I noticed a post from Dan Iocoveli which listed the WCIU Fall schedule. While the Saturday 9pm slot was still firmly in the hands of Svengoolie, a scroll down to the 3am slot was listed as “Elvira.” Dan humorously wrote “I am assuming that is Elvira Mistress of the Dark and not the Spanish talk show.”

It seemed too good to be true that the two hosts would actually share the same station, but this was all but confirmed by an article on the “Fangoria” website which stated (in regards to her new show) “You can catch the new season on  THIS! Television as well as KDOC in Los Angeles, WCIU in Chicago, WATL/WXIA in Atlanta, WBGN in Pittsburgh and other stations.”

Some Svengoolie fans may worry about the prospect of Elvira’s Movie Macabre” making its way into the Windy City. However, I know first hand after meeting Elvira that she admires Rich Koz and it is obvious that he feels the same for her. Aside from that, us Svengoolie fans are a loyal bunch. God help any station that dumped Sven for another host, not to mention the unfortunate successor.

I can only hope that the revival of Elvira might inspire other stations to bring back commercial hosts to cities less fortunate than Chicago. I am also thrilled at the prospect that the two hosts, working for the same station, may make yet another appearance together only”officially” this time as opposed to impromptu. When and if that moment ever happens, I will be sure NOT to miss it again!

2 thoughts on “Svengoolie and Elvira: Together again?”