It had been two years since I’d last visited Kenosha’s Jerry Smith Pumpkin Farm but seemed like a lifetime. This was the site where Wisconsin Horror Host, Dr. Destruction, and I sat down and talked for the very first time. The occasion was shared here on this blog (click HERE if you’re feeling nostalgic) as well as an issue of Scary Monsters Magazine. We sat in back of his hand crafted “Gypsy Wagon” and talked about horror hosting. I believe I left out the part where he and I went out afterwards to a local pizza place and drank too much whiskey and that the last hour of our conversation was slurred, but really what did that have to do with the story anyway? Let’s just say it helped facilitate a rather unusual friendship that still exists today.

END_OF_DOCUMENT_TOKEN_TO_BE_REPLACED

Terror from Beyond the Daves is pleased to share a recent interview with our friend, Ohio Horror Host – A. Ghastlee Ghoul…

END_OF_DOCUMENT_TOKEN_TO_BE_REPLACED

Not long after the premiere of Tim Burton’s DARK SHADOWS, we shared the insights of Dr. Destruction (a life long fan of the show) which you can revisit HERE. Destruction wasn’t the only one eager to share his two cents as horror hostess, Penny Dreadful, also posted her own blog on the subject (see HERE). I suddenly found myself wishing I could sit down with the two of them (metaphorically speaking) and have them answer a few questions regarding their immense fandom of the show. And here’s what happened…

END_OF_DOCUMENT_TOKEN_TO_BE_REPLACED

When I was five, I was drawn in by the “Dark Shadows” TV show. Initially it might of been because there was a child on the show (David Collins) who reminded me of Bill Mumy from one of my other favorite programs, “Lost in Space.” Whatever it was that drew me in, I was completely fascinated by Barnabas Collins along with the overall weirdness of the show that would ultimately stay with me my entire life.

END_OF_DOCUMENT_TOKEN_TO_BE_REPLACED

Last Friday, for the first time in 30 years, commercial TV Horror Host, Mr. Mephisto, donned his signature make-up and stood before the cameras once more. The appearance took place in Kenosha on the set of Dr. Destruction’s Crimson Theatre at The Time Warner Studio.  Mephisto, Dick Flanigan, arrived around noon and was greeted by a full set of cast members and guests as well as local new crews.

From 1969-1982, Dick Flanigan’s Mr. Mephisto would entertain Madison, Wisconsin horror fans as their host extraordinaire! Though not the first incarnation of the character, Flanigan would not only inherit the name but irrefutably make it his own. Late Friday nights, viewers could catch their favorite horror host courtesy of WMTV/Channel 15’s “Ferdie’s Inferno” and later “Lenny’s Inferno.”

END_OF_DOCUMENT_TOKEN_TO_BE_REPLACED 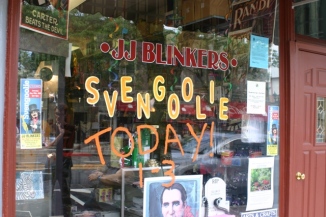 The Internet had been buzzing for weeks at the news of National horror host, Svengoolie, making a public appearance at JJ Blinkers – a costume/trick shop located in Antioch, Illinois. The “Rubber Chicken, Whoopee cushion kinda store” was an obvious perfect fit for Sven, while its location (north of Chicago) made it an ideal spot for his Wisconsin fans to see him as well.

I had heard of this event almost from the moment it was booked courtesy of my friend, Dr. Destruction. Dr. Destruction is an avid fan of both Svengoolies and was honored by the Chicago icon when he participated in his Kenosha based “Big Top Radio Show” (for which I was also honored to be a part of) a few weeks back. Unable to contain his excitement of seeing Svengoolie again, and at one of his favorite stores, Destruction began his own one-man media campaign.