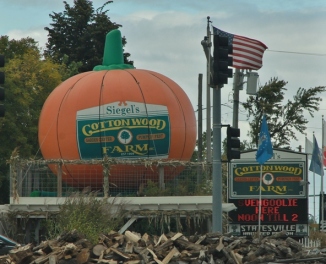 (NOTE: Coverage of Svengoolie’s Flashback Weekend talk show with Robert Englund (in full Freddy make-up) will be posted on Halloween in celebration of  the holiday as well “Svengoolie Day” in Illinois. For the next two weeks we’ll lead  into the big day with posts on his “35th Anniversary Celebration” at the Museum of Broadcast Communications as well as the Nightmare on Chicago Street in Elgin)

For me, Halloween usually kicks off after I first spy the seasonal “Monster” cereals back on the store shelves. Shamefully, I still haven’t had a chance to grab them, though I did get a more direct introduction to the holiday courtesy of national horror host, Svengoolie. The appearance took place at Siegel’s Cottonwood Farms in Joliet, Illinois and the last time I saw him in that area was over two years ago during a Slammers game on a blistering hot evening (which I covered both in Scary Monsters Magazine and HERE). On this late September day the temps were much more forgiving though the clouds looked a bit ominous. I told myself it was just part of the Halloween “ambiance” and decided at the last minute to head over.