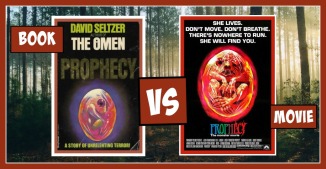 Last month, Prophecy (1979) finally made its way to Blu-ray thanks to the good people at SHOUT/Scream Factory in honor of the film’s 40th Anniversary. Despite my already owning a copy on DVD, I anxiously ordered a copy – mostly for the “extras.” I’ve talked about my love for this film before and, despite it being chided by critics (it currently sits at 27% on Rotten Tomatoes) I think it’s a solid monster movie with a great cast and an old school effects. During one of my vintage horror paperback hunts, I managed to find a copy of the film’s novelization. Since both the book and the screenplay were written by David Seltzer (author of “The Omen”) I didn’t expect there to be much deviation between the two stories. Considering how many times I’ve seen the movie, however, I was eager to learn any further insights the book may bring. But before I get things rolling, I do have to warn anyone who hasn’t seen the movie or book (or read my previous “Book vs Movie” post on The FOG) this blog is loaded with SPOILERS.